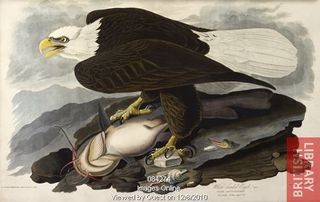 A record was set yesterday at Sotheby's, London, when a copy of Audubon's Birds of America broke the record for the price of a printed book: a handy £7,321,250.  We've a copy on display in the Treasures Gallery at our St Pancras site, accompanied by a digital copy that allows you to 'Turn the Pages'; another digital version can be seen at the University of Pittsburgh's website.

There's something of a connection between the U.S. national project and ornithology.  Thomas Jefferson composed a list of 109 species in his Notes on Virginia and William Bartram listed 215 species from his continental meanderings in Travels through North and South Virginia.  But the father of American ornithology may be said to be Alexander Wilson, a self-taught, Paisley-born weaver, printer and poet.  Arriving in Delaware in 1794 and then taking jobs as a printer, pedlar and teacher, he found himself to be a neighbour of Bartram.  Taking full advantages of Bartram's library, they discussed the need for a proper account of American ornithology and, in 1803, despite his lack of formal training in either natural history or illustration, Wilson resolved to correct this defect.  Over the next few years he travelled thousands of miles by foot, horse and rowboat, drawing and observing and recording bird behaviour (as well as feeding his poetic muse), seeking subscribers to his project in the hope of freeing North America from 'that transatlantic and humiliating reproach of being obliged to apply to Europe for an account and description of the production of our own country'.  He succeeded, and American Ornithology was published from 1808-1814, in nine volumes, many of which were coloured by Wilson himself.

Wilson - in his words, a 'faithful historian of our feathered tribes' - died in 1813, and the books still stand as remarkable examples of printing, as well as scientific insight; to my eye, they also offer a wonderful glimse into the daily life (and the kitchens) of the new republic.

Our copy belonged to Joseph Banks, and here's a picture of the Gold-winged Woodpecker, an 'elegant bird well known to our famers and junior sportsmen, who take every opportunity of destroying him; the former for the supposed trespasses he commits on their Indian corn, or the trifle he will bring in market, and the latter for the mere pleasure of destruction, and perhaps for the flavour of his flesh, which is in general esteem.' 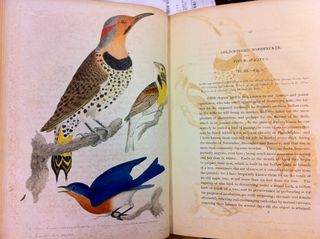