More battles with the CMS for the online gallery for most of today (but we're getting there, thanks to the ever-helpful web services team), and a short outing to the music team's open day. 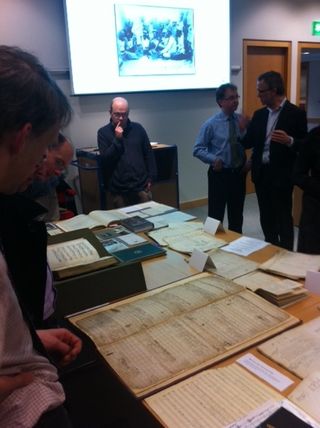 I pop over to the Foyle Room with Jamie (from English and Performance), and we are both made to feel old by looking at recent re-releases of 90s indie records.  There is also a smorgasbord of formats, from Kylie Minogue USB 'dolls', via eight tracks, mini-discs, and what looks to be a recent revival of vinyl.  On the next table are the earliest known manuscripts of Tallis's Spem in Alium (again, I'm reminded of Janet Cardiff's installation at MOMA a couple of years ago) and compositions connected to Henry VIII.  We are intrigued by Kenny Everett's Capital FM scripts (all highligher pens, notes to self, and doodles); they would make a great facsimile for BL publications.  We spend a bit of time looking at the Vaughan Williams collections, and then Nicolas points out the origins of the melody for the 'Star Spangled Banner'; he offers to bring it along to a show and tell on Monday.

Now back to working on the Civil War Exhibition; the text is getting there, so it's now a matter of finding the best images.  So far, the Penny Illustrated News is proving to be the most useful.  And it's online via the 19th Century British Newspapers site.