Narrating Slavery and Freedom in Canada 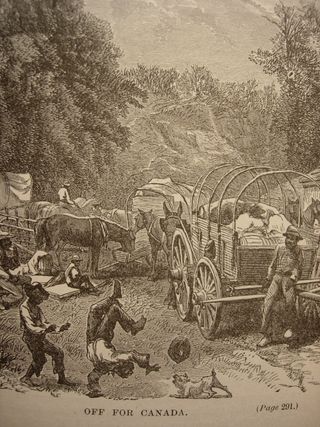 ['Off for Canada', an illustration from, Glenelg [pseud.] (1889), Broken Shackles, Toronto: William Briggs]

As with the United States, slavery is part of Canada's heritage. This heritage is complex, including the enslavement of native peoples, participation in the African slave trade and Canada's role as an Underground Railroad safe haven (to provide a simple sketch). As these examples suggest it is also an interconnected heritage, involving the United States, Britain and various Caribbean territories, as well as Canada itself. The British Library's collections, therefore, provide a unique resource for the consideration of this history. Information and accounts are contained in many elements of the collections, with monographs, newspapers, pamphlets, journals and various other materials all providing insight into slavery in Canada and its associated connections with the rest of the Americas.

My motivation in sketching this out is to promote a collaborative studentship being offered by Sheffield University in partnership with the British Library. 'Narratives and Depictions of Slaves and Former Slaves in Canada: 1800 - 1900' is an opportunity to conduct PhD research into the Canadian collections of the British Library, investigating how the experiences of slaves and former slaves in Canada are represented therein. It is also an opportunity to contribute to understandings of the richness of the collections here, drawing out the significance of the works held and illustrating their connections to materials and individuals from other parts of the Americas and the British Empire.

The link in the previous paragraph contains more information on the project, eligibility and the application process. There are also contact details for Dr. Jane Hodson (studentship supervisor at Sheffield University's School of English Literature, Language and Linguistics) and myself should you wish to discuss the project further.

Posted by Philip Hatfield at 3:04 PM