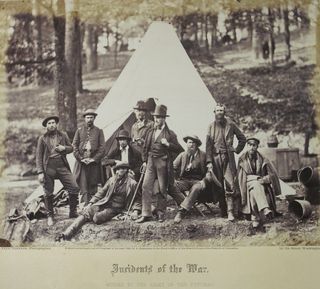 There has been much in the press over the last week or so concerning revised estimates of the death toll during the American Civil War so we've dusted off and updated an earlier blog on the subject.

A couple of years ago I started to follow Professor David Blight's Yale course on the American Civil War on the wonderful Academic Earth (we can all have a Yale education now!). The right statistics can really help to focus the mind - I had known that around 620,000 Americans had died during the Civil War, but when I heard Professor Blight say that if you applied the same death rate per capita to the Vietnam war, some 4 million American soldiers would have died in Vietnam (as opposed to the actual –and still staggering figure of c.58,000), that really helped to bring home to me the enormity of the conflict. And now we learn that those figures may have been underestimated by as much as 20% and that the real figure is likely to be between 650,000 and 850,000. The revising of the estimate is due to the work of J. David Hacker, an historian at Binghamton University, who has been examining newly digitised census data for the Nineteenth Century. For more information on this important work, see an article in the New York Times and a piece on the BBC News website. You can also read Hacker's full article A Census-based Count of the Civil War Dead in Civil War History (Vol. LVII No.4, 2011).

These days we are all too used to seeing images of war in the papers or on our TV screens but photography was still relatively new at the time of the Civil War.  Roger Fenton’s photographs from the Crimea in 1855 represent one of the earliest attempts to document war, but although he recorded the landscape and the military personnel etc, there are no battle scenes. Not really surprising since the cumbersome equipment and laborious wet-plate photographic process made it much too difficult and dangerous to photograph actual fighting. But Fenton also deliberately chose not to record the bloody aftermath of battle.

Alexander Gardner, a Scot who worked for Matthew Brady, went to photograph the Civil War in 1861 and, unlike Fenton, he did record the resulting carnage. This included the aftermath of one of the bloodiest days in American history at Antietam, Maryland, in September 1862, when McClellan’s Army of the Potomac faced Robert E. Lee’s Army of Northern Virginia. And here’s another statistic from Professor Blight- each year 23,000 candle lamps are placed on the battlefield at a ceremony held to commemorate the number of casualties that fell there over the course of the almost day long battle.

Gardner’s photographs of the dead at Antietam were exhibited at Brady’s New York gallery and understandably caused a sensation. But he was soon to part company with Brady (who often took the credit for the photos of others) and set up his own studio. More of Brady’s photographers joined him and together they continued to document the encampments, soldiers and battle fields. Gardner's Photographic Sketch Book of the War appeared in 2 editions -one in 1865 and one in 1866, both consisting of 2 volumes, each volume containing 50 albumen print photographs, and each photograph accompanied by a descriptive caption. Of course, much has been written on Gardner's 'staging' of some of the scenes and bodies, not to mention the veracity of some of the descriptions (for some examples see our Points of View webpages and also the Library of Congress), but the Sketch Book still represents one of the earliest visual evocations of the horrors of war.

Another statistic that I learnt from Professor Blight, equally staggering but in a different way, was that over 65,000 books have been written on the Civil War, which would tend to give credence to Gertrude Stein’s comment (at the top of the blog) on its enduring interest. And no doubt that figure also now needs to be revised upwards. I certainly don’t think that the Library can claim to have all of the books on the subject, although our holdings are strong. And Matthew is still beavering away on a feature on the Civil War for the Library's online gallery. Quite a bit of material has already been digitised (we're focussing on our rare and unique items) and Matthew has been blogging about his activities and discoveries over the last year. You can find his updates on the project by clicking on Civil War in the categories section which appears on the left-hand side of the blog. We're keeping our fingers tightly crossed that the feature will see the light of day in the next couple of months.