Although the British Library has important collections of books from colonial Latin America, including the earliest extant book printed in the Americas, Zumárraga’s Dotrina breve de las cosas que pertenecen a la fe catholica (Mexico, 1543/44, BL shelfmark C.37.e.8), such books are now all too often prohibitively expensive for us to acquire.  The recent acquisition of two seventeenth-century Mexican imprints is therefore particularly noteworthy. 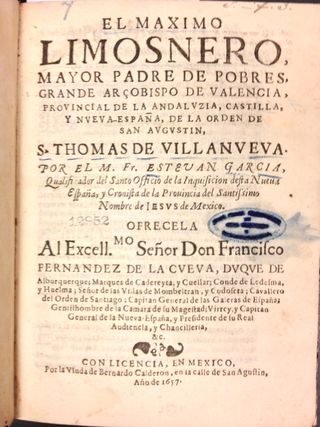 St Thomas of Vilanova (1487 or 88 – 1555) was beatified in 1618 and  canonised on 1 November 1658.  His hagiographer seems to have anticipated this by calling him ‘Saint’ in 1657.  It was not uncommon for the supporters of candidates for sainthood to anticipate the official canonisation: Duarte Pacheco’s Epitome da vida apostolica, e milagres de S. Thomas de Villa Nova appeared in 1629 (BL shelfmark: 1578/1091).

St Thomas was a notable professor of theology and preacher in Spain.  He seems never to have visited America but sent friars of his order to evangelise in Mexico in 1533 and in 1547 he ordained Luis Beltrán, the future American missionary.

A further interest of both these new acquisitions is that it they are the work of  women printers.  Most women who became printers at this period, in Europe and in the Americas, did so by taking over their husband’s business on his death.  Paula de Benavides and her husband Bernardo Calderón founded a press in Mexico City in 1631; widowed with six children, she took over the business in 1641 and died in 1684.

García’s book was also read by women, as it once belonged to the ‘Convento Antiguo de Carmelitas Descalsa [sic]  de Nuestro Padre Señor San Joseph’ in Mexico City (inscription on reverse of title page).  Saints’ lives were the recommended reading of the godly, and were contrasted with the romances of chivalry.

If we might see García’s book as aimed at the reader at home, our second acquisition, like so many of the books printed in the Americas in the sixteenth and seventeenth centuries, is a reference work for clerics spreading the faith. 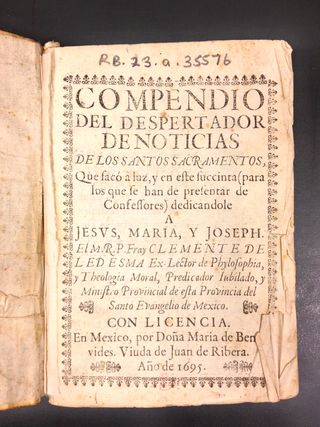 Heiress of  Paula Benavides and widow of the printer Juan de Ribera, María de Benavides began her printing career in 1685 and is recorded as late as 1700.

Posted by Carole Holden at 2:06 PM