Want therefore shall not I: The Whole Book of Psalmes 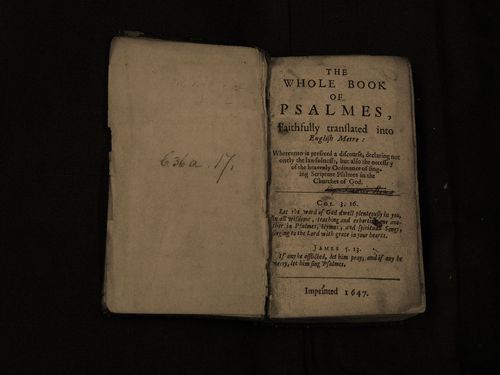 Image: The Whole Book of Psalmes, 1647, held by the British Library.

The Bay Psalm Book (1640) was not the first book to be printed in America, and this is not it.  In terms of printing in North America, Juan de Zumárraga, Bishop of Mexico, imported a press from Seville, along with an Italian printer Juan Pablos in 1539. The image above is of the second edition of The Whole Book of Psalmes, as The Bay Psalm Book is formally titled, also printed and published in Cambridge in the Massachusetts Bay Colony in 1647.

Like Zumárraga, the puritan colonists had felt the need to import a printer and press to support their experiment in what was to them the New World.  The printer, Rev. Josse Glover, did not survive the journey, so another passenger, Stephen Daye (also spelled Day), took on the task.

The first book, as opposed to printed item (such as the long-lost Oath of a Freeman (1639) and an almanac), to emerge from the press resulted from the deliberations of 'thirty pious ministers'. It was a new translation of the Book of Psalms, based on the Hebrew texts they had available and, in the words of George Parker Winship, a 'work whose outstanding quality is the unbroken uniformity of phrasing and metrical character'.  It did, however, possess 'one undeniable virtue' for the puritans: 'there was not a line in it that could remind any worshiper of the superb cadences of the versions that had become embalmed in the ritual of the Established English Church, the Book of Common Prayer'.

This virtue aside, the churches of Salem and Newbury had declined to recommend The Bay Psalm Book's use (perhaps out of suspicion of their overbearing Boston neighbour).  In consequence, in June 1647, the Synod invited the President of Harvard College, Henry Dunster, to revise the translation.  Dunster largely passed this task on to Richard Lyon. The Synod approved the manuscript in 1648, and it was sent to England to be printed in Cambridge.  In the meantime, a second edition of the original Bay Psalm Book had been issued in 1647.*  This is now held by the British Library at shelfmark C.36.a.17, and three photographs of that volume illustrate this blog post.  The English Short Title Catologue lists two other copies: one at the New York Public Library, and the other in Rhode Island at the John Carter Brown Libary, Brown University.  For those with access to Early English Books Online (EEBO), the John Carter Brown copy is available digitally. 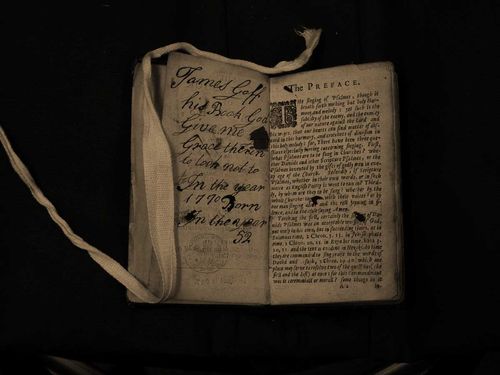 It could almost have been shelved next to its predecessor.  In 1859, the American bookman-extraordinaire Henry Stevens tracked down a copy of the 1640 edition as part of the sale of Edwin Crowninshield's library and offered it to the British Museum for the sum of £150.  But, these were austere times, and, after waiting five years, the Keeper of Printed Books felt that he could not put the invoice before the Trustees to authorise its purchase.  Stevens had it rebound, and sold it on.  It is now held by Yale University Library. 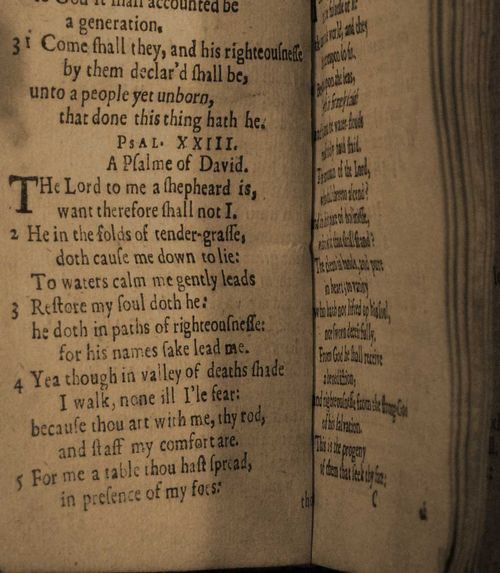 You could have your own copy, too.  Later this year (26 November 2013), Sotherby's are auctioning a copy for the first time since 1947.  It is being sold by the Old South Church, whose building is in urgent want of repair, and it is currently on tour around the USA.  There are ten other known copies.  (Daye originally printed 1,700.)

For more on The Bay Psalm Book, the starting point is George Parker Winship, The Cambridge Press 1638-1692 (Philadelphia, 1945).  Winship also attempts to unpick exactly what Glover and Daye's plans were in Boston.

The Winship quotation above is taken from his An Odd Lot of New England Puritan Personalities (Portland, Maine, 1942).

And, on how those 1,700 copies were actually used (and sung), as well as their wider cultural meaning, see Joanne van Woude, "'How Shall We Sing the Lord's Song in a Strange Land?': A Translatlantic Study of the Bay Psalm Book", in Linda Phyllis Austern, Kari Boyd McBride & David L. Orvis, eds., Psalms in the Early Modern World (Farnham, 2011), pp. 115-134.

* But where was it printed? The ESTC notes: 'It may have been printed by Stephen Daye or perhaps by Matthew Daye, or printed in England. The doubt supports the latter belief. Trumbull was of the opinion that there can be no reasonable doubt that the edition was printed in England. Cf. Evans 20'.