As a historian I get very excited about old letters, diaries, account books and inventories – but once in a while there are other ‘records’ that trump almost everything else.

I had one of those moments this week when I returned to George Washington’s Mount Vernon. Over the past six years I have been many times to Washington’s estate in Virginia (just south of Washington DC) – first to research my book  Founding Gardeners and then to give talks about the book. By now I go there to see the changes in the gardens (of which there are many, such as the fabulous restoration of the Upper Garden) and to meet my friend Dean Norton who is the Director of Horticulture there. Dean always makes a huge effort to entertain me – for example, by taking me out on the Potomac in a boat or letting me drive around the estate with a gator [A John Deere utility vehicle, not a reptile - ed.].

Last Wednesday’s visit, however, was one of the most memorable. Within a little more than a month, three very old and important trees had come down. The most visible loss is the majestic Pecan tree next to the house. It was a shock to see Mount Vernon without the beautiful tree (145 feet high). It all looked a bit naked. 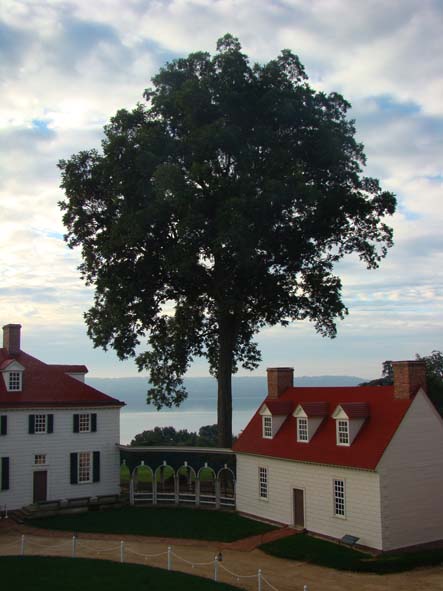 Dean explained to me that they had finally decided to take down the tree because it threatened the house. One big storm and the Pecan might have crashed onto Washington’s house. No matter how old the tree (from the 1850s), the mansion and its content was of course more important.

It took four days to take the giant down – with a crane. They did a fabulous time–lapse film of it.

At the same time they felled a white oak that had been killed by lightening a while ago. The white oak was in a less prominent spot but it was even older – pre–1770 and most likely planted by the great man himself. Another painful loss. At least the wood is now invaluable for restoration projects at the house.

And then, on 31 March, the next tree came down – crumbling under its own weight. This was a big swamp chestnut oak which grew at the ha-ha wall on the slope towards the river. Planted in the 1760s or 1770s it was probably also placed there by Washington. It was completely rotten from the inside and just needed that last bit of wind to crash down. It's so sad to see these giants lying broken on the ground.

When I scrambled around to pick up a bit of bark to take home as a memento, Dean got a chainsaw and sliced off a bit for me. Now I have my own Washington tree in my office. That’s the kind of history that gets under my skin.