Taking the Train to America: The Royal Scot and 'A Century of Progress' 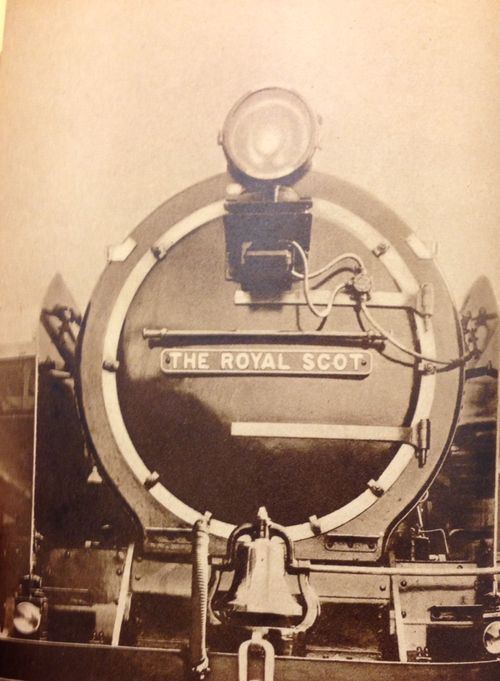 Not much remains of the original Victorian Euston Station, a block or two away from the Library. The much-loved and now lamented arch is gone, leaving only two Portland stone cuboid entrance lodges which now serve as real ale and cider pubs. But, under its fine, floating concrete ceiling, the station is still a gateway to the Midlands and Glasgow, as well as Tring and Milton Keynes.

In the spring of 1933, there was, though, much excitement: the arrival of The Royal Scot (London, Midland and Scottish Railway Class 6100). This was not an unusual occurence, since the locomotive, built in 1927 in Glasgow, had a daily 'task of linking England with Scotland', but on this day, the machine was due to be packed up and shipped to North America for a tour of the continent prior to a five-month display at the 'Century of Progress' exposition at Chicago. 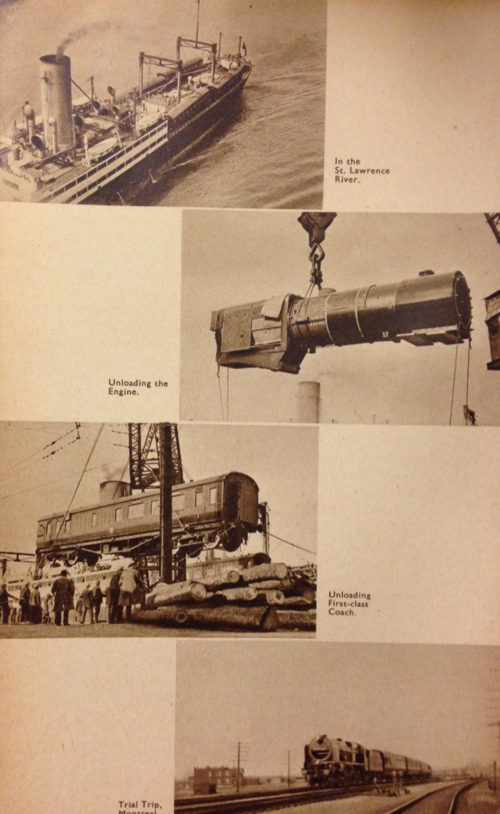 Unloading The Royal Scot. It made use of the world's largest floating crane, 'London Mammoth', to place the engine on the Canadian Pacific Steamship, Beaverdale, at Tilbury Docks.

A booklet commemorates the expedition as The Triumph of the Royal Scot. It is bundled up with other publications by the LMS at shelfmark 10450.pp, and I have just been to the basement to look at it (noting the rumble of a tube train as it ran past during my descent in the industrial elevator).

'Never before had a complete railway train visited the American Continent', the pamphlet opens. Cross-referencing the Taunton Courier, and Western Advertiser (13 April 1933) via the British Newspaper Archive, does raise the eyebrow slightly, as that paper notes in its report on The Royal Scot that the 'G.W.R. express train King George V. attracted great interest when it visited America'. Perhaps it's just a matter of semantics (what is a complete railway train, after all? The Royal Scot was shipped along with its driver, engineer and fireman, making more of a set). The Bell, as the Great Western Railway engine was affectionately called, made the transatlantic trip in 1927 for the Baltimore and Ohio's centenary celebrations. (In 1893, the London and North West Railway also sent the Queen Empress and two carriages to the World's Fair at Chicago; and the Coronation Scot would head to the U.S. in 1939.) 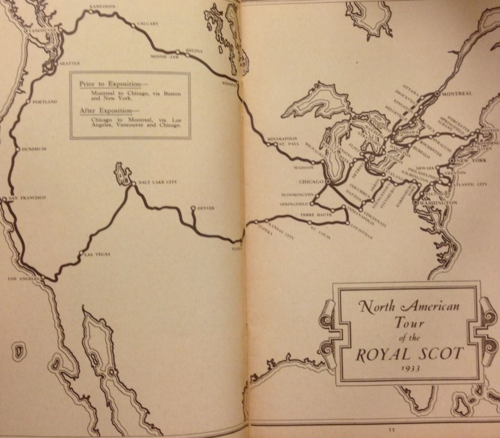 The Royal Scot undoubtedly made more of a stir, with its grand tour of both Canada and the United States, and then by its presence at the world fair. The pamphlet records that our travelling choo-choo had 3,021,601 visitors pass through it during the entirety of the trip. The 'wonderful gesture on the part of Britain', as the mayor of Detroit put it, was, of course freighted with significance.

The Century of Progress exposition not only celebrated, well, a century of progress, but was a chance for nations to set out their industrial and commercial stall. The arrival of the red train was a whistle-sounding for British industry, and a reminder that it wasn't just Philadelphia that built locomotives. But it was perhaps also a slightly-alarmed whistle. For one thing, the train had to be accompanied with a small leaflet explaining why British trains were so narrow, and there is a sense that British engineering is already overshadowed by its transatlantic competitor, even though it was the 'Nation that gave railways to the World'. The pamphlet also notes that in 'March 1933, the U.S. financial crisis occurred'.  However, the decision to ship the train was 'adhered to, a decision which was greated with the greatest satisfaction throughout the North American Continent, as affording evidence of British confidence in U.S. ability to triumph over difficulties'.

The men who accompanied the train were not entirely sure about what they found during their tour of the States. William Gilbertson (60) and John Jackson explained to the New York Times (11 Aug 1933, p. 17) that they found New York overwhelming, and would be glad to be back in Chicago. The buildings were 'too high', the '"Underground' is steadier than the subway' and the 'giant moghuls of the Pennsylvania Railroad' were not to be prefered to their 'snug little engine'.  The George Washington Bridge, although fine, did not match Tower Bridge. Worst of all,when they sounded the Scot's whistle on the 'first day in Chicago, some one shouted "Peanuts!"'

Our train, then, is more than a piece of engineering, but a symbol of nationhood.  The Royal Scot train, would attract more interest as 'its daily task of linking England with Scotland automatically created for it a much wider interest than could have been achieved with a train operating only in one country'. Ideas (and possibly confusions) of race, nation, Union, and capitalistic competition are waiting to be unpacked at this moment of international crisis and blustery-self confidence, when

'a little slice of Britain [was] transported across the seas -- five hundred tons of British science, skill and steel set down for a space among folk who share the same tongue, the same ideas as the men, labouring in workshops 3,000 and more away, who fashioned the masterpiece of modern craftsmanship that is The Royal Scot'.

The visit of The Royal Scot to America has explained to the people of the United States and Canada some idea of England's efficiency and greatness. Viewing The Royal Scot -- small, but solid and efficient -- is just like getting an insight into the genius of the British Race.