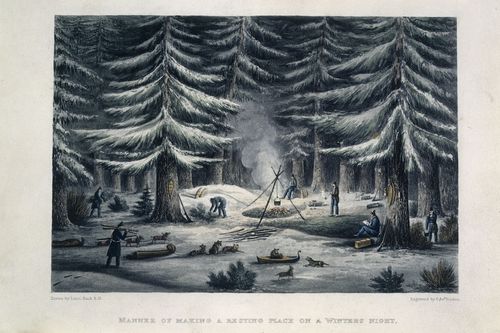 Above: a camping scene from one of Franklin's earlier overland expeditions [G.7397]

With 'Lines in the Ice: Seeking the Northwest Passage' coming up in November it would be remiss not to pass a few comments on Canada's locating one of Sir John Franklin's ships. When news of this year's search came through I must confess I hoped they would find something (perhaps a spoon?) but I was doubtful something as significant as a ship would be found.

A few *spoilers* for 'Lines in the Ice' are in the following but rest assured there will be plenty more to see when it opens. So, for those reading on, a potted history of why Sir John Franklin found himself in the Arctic as executive officer of the ships Erebus and Terror. Leaving Britain in 1845 this was Franklin's third time in charge of an Arctic expedition and his fourth aboard one of the many voyages of exploration championed by Sir John Barrow. His previous two Arctic expedition commands had seen some success but also great hardship and starvation (leading to he and his men, famously, eating their boots). 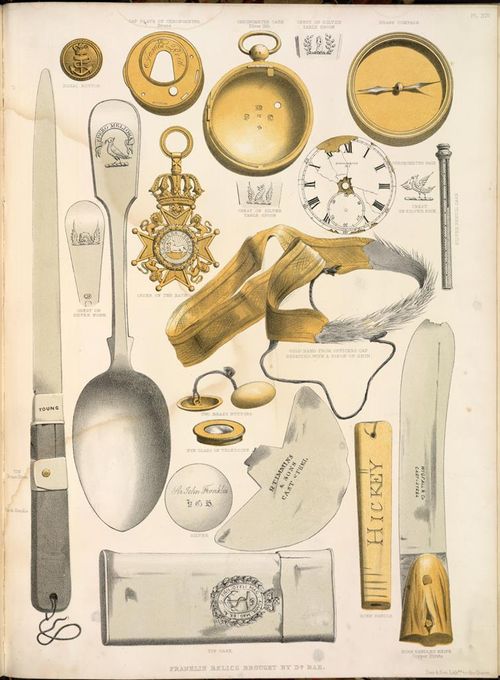 Above: Previously found Franklin artefacts (including a spoon) [Shelfmark: 1781.a.6].

In all these expeditions Franklin was searching for the Northwest Passage, a new trade route to Asia that would dramatically cut journey times for British sailors. English and, later, British sailors had been searching for the route at least since the time of the Tudors, largely hoping to break Spanish and Portuguese trade monopolies with the Asia. By Franklin's time, however, the aim was more broadly political, as much a way of expressing British power over the seas as it was an attempt to find a trade route that may, or may not, be practically viable. Indeed, while we think of this story as being one of Arctic exploration (and of Franklin as an Arctic explorer) it's perhaps worth thinking about the broader context at play here.

After all, Franklin was not just a polar explorer. He was a veteran of the Napoleonic wars, deafened by the roar of conflict but otherwise unscathed, and in between Arctic journeys he served in the Greek war of independence and was Lieutenant-Governor of Van Diemen's Land. Further, by 1845 he was a fixture of Lincolnshire and London society. In short, his career spanned the globe and he was as much a citizen-officer of the British Empire as he was anything else.

So, when Franklin went missing with his ships (which had also seen a diverse and international series of duties) this was not a disappearance of an Arctic specialist on the edge of the world; instead a British officer vanished trying to bring a space into the service of the globe-spanning British Empire. While the distinction is subtle it helps explain the significance of this event, why we remember it so strongly and why such bad-feeling ensued when Dr. John Rae announced the grim fate of Franklin's crew. 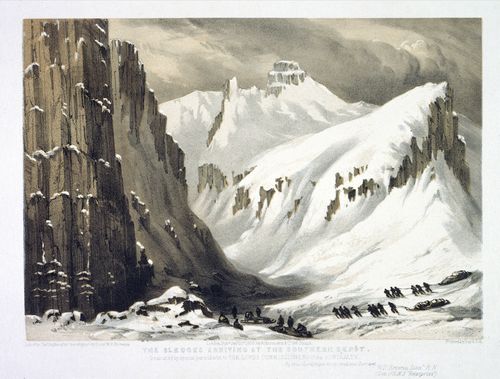 Above: a man-hauling party from HMS Investigator. Dragging huge weights across the ice was a fate awaiting a number of Franklin's crew, as well as those searching for them [Shelfmark: 1259.d.11]

Parks Canada's locating of a Franklin ship also operates in a wider context than the narrow geography of the Northwest Passage. It allows Canada to perform geopolitical sovereignty, display technical expertise and set a media agenda on a global scale - this story is being read far and wide beyond Canada and the U.K. For 'Lines in the Ice' this is quite a happy development as it is a further example of the exhibition's main point, that the Northwest Passage and Arctic Ocean exploration in general are areas of global significance. Embedded in all of this are complex networks of cause and effect, especially considering that the Arctic is not an unpopulated space for Europeans and Americans to express their desire for exploration.

Indeed, Inuit who lived in what is today Canada have played an integral role in other nation's exploration of the Northwest Passage - and paid a heavy price for it. A great Franklin search example of this was sketched out by Ken McGoogan in the Globe and Mail and there are many more such stories to tell; but that is for another blog post and the exhibition itself.

Posted by Philip Hatfield at 3:01 PM

I was interested to read this post shortly after I read one about Franklin in the Derbyshire Record Office blog which holds many of his papers inherited via his daughter Eleanor Isabella.