Some real estate for Friday: Homes of American Authors (New York, 1853). A collection of somewhat florid travelogues composed by several writers and published by G. P. Putnam & Co. as a 'gift book', this work successfully began the America vogue for peeking into the homes of the talented, rich or famous. It's a habit that that is continued today in numerous glossy magazines, TV shows and popular blogs. Putnam followed up the success of this publication with Homes of American Statesmen (1854), which included the first photographic illustration in an American book.

Here are my top three descriptions of writers' libraries from Homes of American Authors. 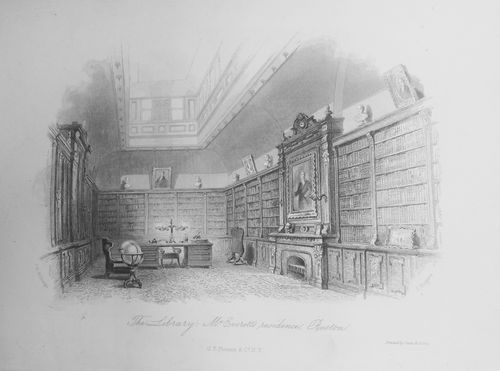 Always a favourite on this blog (mostly for his heroic, and forgotten, Gettysburg Address, hours longer than Lincoln's), Everett's 'career is most justly indicated by a view of his birthplace, which at once suggests a life of mental activity and patriotic devotion, and of the interior of the library where the best hours of an honored maturity are passed, eloquent of that wealth of attainment and literary culture, which has been the source both of his extensive usefulness and wide renown.' 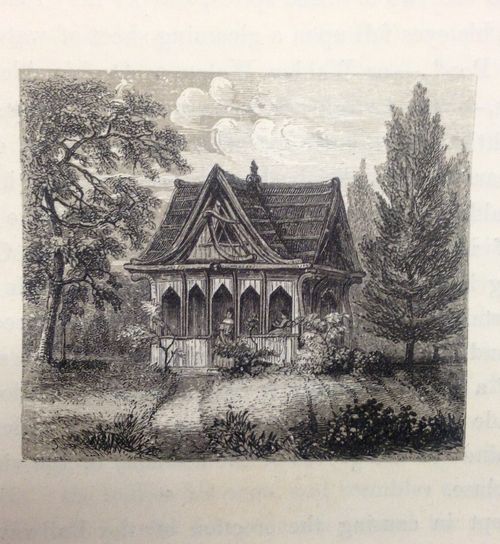 'Mr. Emerson's Library is the room at the right of the door upon entering the house. It is a simple square room, not walled with books like the den of a literary grub, nor merely elegant like the ornamental retreat of a dilettante. The books are arranged upon plain shelves, not in architectural bookcases, and the room is hung with a few choice engravings of the greatest men... It is the study of a scholar'. In here, the local villagers noted, 'he has a huge manuscript book, in which he incessantly records the ends of thoughts, bits of observation and experience, and facts of all kinds, -- a kind of intellectual and scientific rag-bag'.

'The library occupies the northwest corner... and we need hardly say that of all the house this is the most attractive spot... because it is, par excellence, the haunt of the poet and his friends. Here, by the great table covered with periodicals and literary novelties, with the soft ceaseless music of rustling leaves, and the singing of birds marking the silence sweeter, the summer visitor may fancy himself in the very woods'. In here, the poet could turn 'from the dryest treatise on politics or political economy, to the wildest romance or the most tender poem -- happy in a power of enjoying all that genius has created or industry achieved in literature.' You will be pleased to note that the 'library has not, however, power to keep Mr. Bryant from the fields, in which he seeks health and pleasure a large part of every day that his editorial duties allow him to pass at home.'

All images in the public domain, and taken from our copy of Homes of American Authors held at shelfmark 816.e.26. The Cornell University's copy is online via the HathiTrust or via Google Books.