For the literate classes in the Mughal empire, in order to ‘get on’ and enjoy good career prospects it was essential to master Persian, the language of administration and the dominant culture. This led to the production of many dictionaries, textbooks and reference works on Persian language, literature, and the writing of formal letters. Hindu authors played a major part in all this. We plan to return to this subject in future blog entries. Meanwhile, here is one salient example.

Among the Hindu scholars who enjoyed royal patronage was Tekchand Bahār whose best known work is Bahār-i ‘Ajam (‘Persian Springtime’), a glossary of expressions used by Persian poets. Tekchand’s erudition is no less amply illustrated in the autograph manuscript of another of his works, preserved at the British Library. (The only other known copy, in Lahore, is incomplete and dates from the 20th century; hence the question arises whether the Delhi lithograph edition of 1884 was made on the basis of our manuscript or of some other one of which the whereabouts are unknown.) This manuscript, Or. 16171, bears the title Bahār-i Būstān, meaning ‘Springtime of the Orchard’ and alluding (like the Bahār-i ‘Ajam) to the author’s penname, Bahār. The text is a commentary on the Būstān or ‘Orchard’ of Sa‘dī of Shīrāz (d. ca. 1292). This long poem, composed in Sa‘dī’s old age, is a masterpiece in which he distills his wisdom about life and ethical principles. 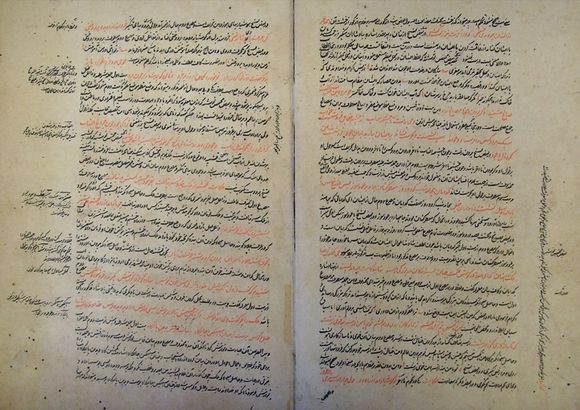 A page of Tekchand's commentary. Here Sa'dī's original verses are in red followed by Tekchand's explanations (Or.16171, ff. 96v-97)

From the colophon we learn that Tekchand completed his work, and this manuscript, at Delhi on Wednesday 21 Rabī ‘ al-Ākhir 1165: that is, 8 March 1752. Interestingly, Tekchand wrote the beginning of his preface on folios 1v-2r (the first two pages of the volume). But then, perhaps because he found that there were many alterations he wanted to make, he broke off on 2r and started afresh on 2v, the next page. Furthermore, the remainder of the manuscript contains a great number of notes and corrections in the author’s own hand – a good example of an autograph in which one can readily observe the writer’s orderly mind at work while enjoying the luxury of reading Tekchand’s clear and elegant nasta‘līq calligraphy. 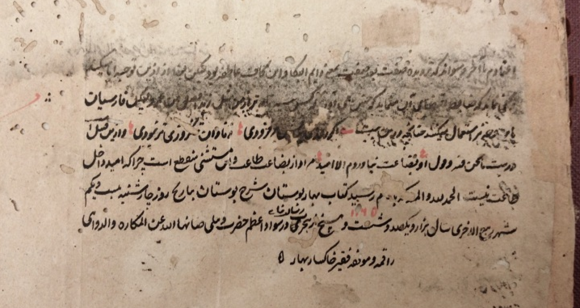 This important manuscript came to light about ten years ago, in a box of dust-laden material that had long lain forgotten in the basement of Probsthain’s, a venerable orientalist bookseller in Bloomsbury. We curators continue to take every possible opportunity, as and when funds allow, to enrich still further the British Library’s world-famous collection of Persian manuscripts – not least those relating to Mughal studies.

Posted by Ursula Sims-Williams at 2:58 PM