Christoph Clavius was born in Bamberg in either 1538 or 1537 (an amusing discrepancy for a scientist whose fame derives from his work on calendar reform) and was initiated into the Jesuit order by Saint Ignatius Loyola himself in Rome in 1555, and passed away in 1612, an eminent scholar. Many of Clavius’ works were influenced by Latin translations of Arabic scientific works, including those of Ibn Rushd (in particular his commentary on Aristotle), the astronomers Abū Ma‘shar, al-Biṭrūjī and al-Farghānī, as well as the mathematician Thābit b. Qurra, among many other scientists writing in Arabic and Persian whose works Clavius cites. 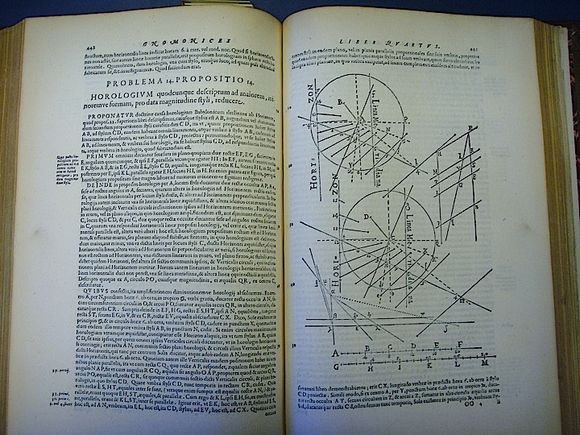 Clavius is an excellent example of the many Jesuit scientists of his age who continued to teach Ptolemaic astronomy (i.e., a geocentric vision of the solar system, indeed the universe, in which the planets and stars orbited the earth in concentric circles), despite the rise of – and often despite their own familiarity with and endorsement of – Copernican astronomy. Christoph Clavius’ Gnomonices Libri Octo, on the art of gnomonics (timekeeping through the use of a sundial), was published in 1581. 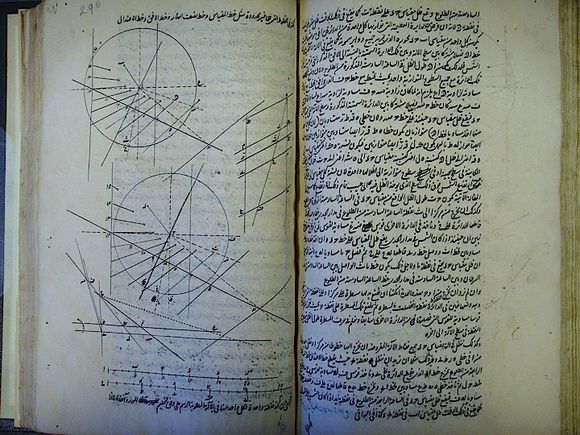 This work also exists in a fascinating Arabic translation emanating from the Mughal empire that was purchased by Richard Johnson (1753-1807), a well-known collector of manuscripts and miniature paintings who worked for the East India Company. Johnson made an annotation on the flyleaf of the manuscript that the translator of Clavius’ work was sent to Portugal by Aurangzeb – presumably to study or in some diplomatic capacity. The full note reads, “Upon Dialling.  Work of Clavius in Latin translated into Arabic by Maatemed Khan who went to Portugal in the time of Aurungzebe. This is the original foul copy of the translation in the hand of the translator” (i.e., the ‘foul copy’ being the first draft, in contrast to the ‘fair copy’). 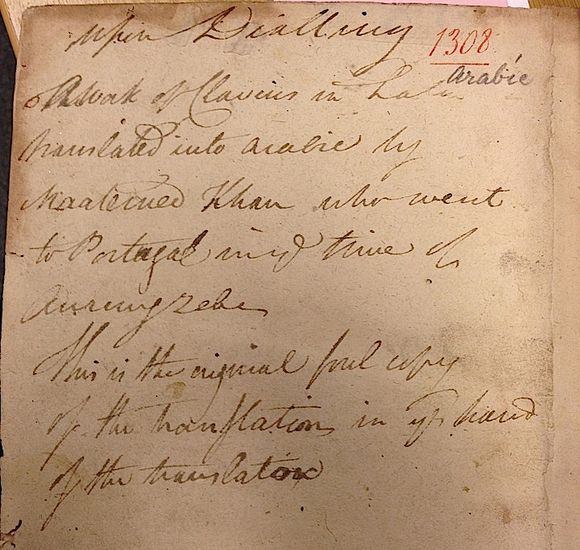 A further note, in Arabic, added by the translator’s son, reads: “Draft of the Book of Measures [Kitāb al-Maqāyīs] which was composed by Clavius the Frank [Kalāwīūs al-Firinjī] in the Latin language, and my father, God have mercy on him, translated it into the [clear - mubīn?] Arabic language, possessor of virtuous talents including the perfection of acquired knowledge, Rustam called Mu‘tamad Khān, the son of Qubād, gatherer of proofs of knowledge, perceiving the secrets of the spoken and the tacit, given the name Diyānat Khān al-Ḥārithī al-Badakhshī, may God be fair with both of them and elevate them.  Signed: I, who am a feeble slave begging for the mercy of the One and the intercession of the Prophet, Mīrzā Muḥammad, may God cause him to attain eternal happiness”. 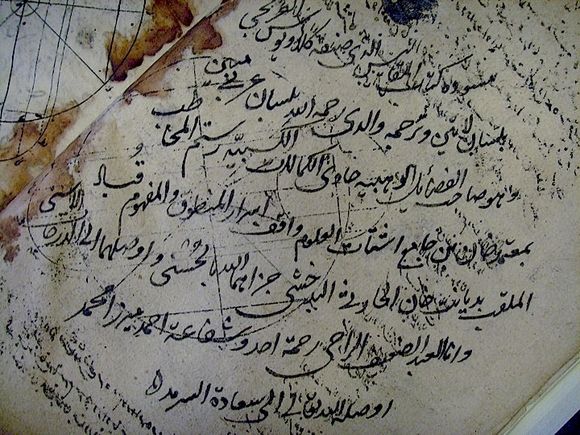 This translation offers some fascinating possibilities – the first is the demonstration of how knowledge circulated in the early modern world.  Clavius’ work, which responded to and was inspired by Arabic mathematicians and scientists in Latin translation, here a generation after its publication is translated back into Arabic to be read, presumably by elites at the court of Aurangzeb, where the work’s translator and his son were courtiers.  This translation demonstrates the complexity of knowledge flows – that they were synchronic as well as diachronic, and also involved a process not just of translation, but of re-translation, re-interpretation and development as they travelled.  Furthermore, the inscriptions taken in tandem, one in English made by an East India official, the other in Arabic by a Mughal courtier, open the possibility that already in Aurangzeb’s reign, Mughal elites travelled to Europe perhaps to study.  In the case of Mu‘tamid Khan, the translator of this text, he mastered the technical idiom of geometry and mathematics in Latin, and then translated it into an equally complex scholarly language, Arabic.  Not an uncommon intellectual feat at the Mughal court, this process of scientific translation remains to be studied in depth. It is also possible that the presence of the Jesuits at Goa had an influence on the production of this translation, but firm evidence remains to be found.

Posted by Ursula Sims-Williams at 5:52 PM