In addition to single drawings and maps contained in larger works, the Mughals almost certainly used route maps which had obvious practical applications. Some 18th century examples exist in the form of schematic lists, while others are diagrammatic representations. Maps in this format may well have been produced centuries earlier, but are not to be found among the few surviving examples of which the British Library is fortunate in having two. These are almost identical copies of the route from Delhi to Kandahar in Afghanistan. One (IO Islamic 4725) is a scroll measuring 20 metres, and the smaller (IO Islamic 4380), on display in the exhibition ‘Mughal India’, is 12 metres long. No indication of orientation or scale is given.

Neither of the maps is dated, but a note in English on the back of the larger scroll mentions a “Moulvee Ghulaam Kadur”. This is possibly Mawlavi ʻAbd al-Qadir Khan ("Abould Kadir Khan" in the published report) who in 1806 worked for John Lumsden, a civil servant of the East India Company at the Nawab Vizier’s Court in Lucknow. As a result of a threatened invasion by the ruler of Afghanistan, Zaman Shah Durrani (ruled 1793-1800), Lumsden, in 1797, sent an agent, Shaykh Rahim ʻAli to Kabul to collect data and report back. From Rahim ʻAli's notes, ʻAbd al-Qadir extracted an account of the 75 stages of the journey from Delhi to Kabul and published it in The Asiatic Annual Register for 1806 (for details see below). It is possible, however, that the British Library maps were based on an earlier model since their details complement rather than duplicate the printed account. They include references to the residence of Maharaja Amar Singh who ruled Patiala from 1748 to 1782,  and "the late Burhan al-Mulk", the first Nawab of Oudh, who died in 1739, besides frequent mention of ruined serais (‘travel-lodges’) which were probably destroyed in the disturbances from the mid to late 18th century. Unlike the memoir, both maps extend the route as far as Kandahar. 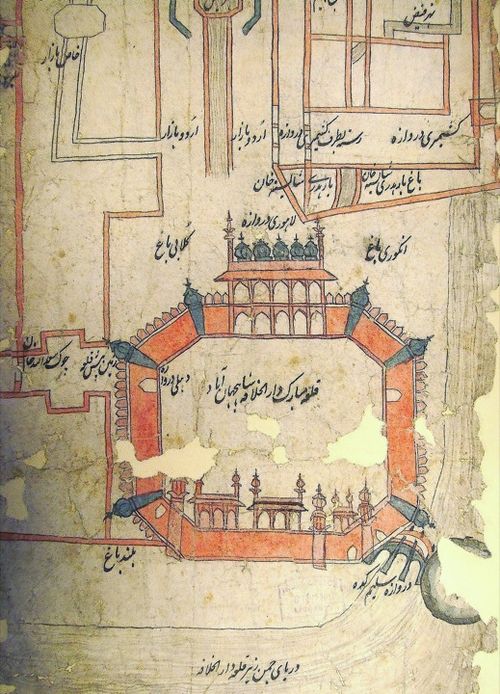 The map begins at Delhi with the area around the Red Fort, north of the River Jumna. On the lower right is Salimgarh Gate and on the left is Buland Bagh. To the left of the Delhi Gate is Saʻd Allah Khan's Chowk. North of the Fort are vineyards on the right and a rose garden on the left. Between the Fort and Chandi Chowk (in the centre going north) are the garden pavilion of Shaista Khan and the Urdu Bazar. At the top of this section are the Faiz Canal on the right and the Khass Bazar on the left. 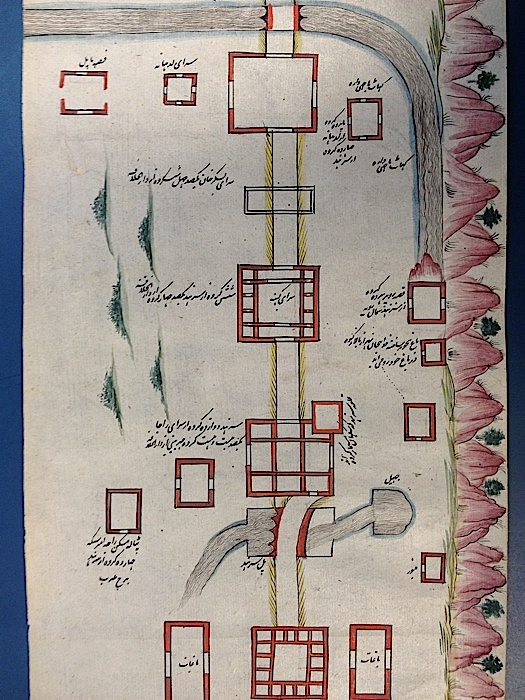 The route between Patiala and Ludhiana (IO Islamic 4380)

The section illustrated above shows, from the bottom on the left, Patiala the residence of Raja Amar Singh, 14 kroh (1 kroh is about 1.5 miles) from Sirhind, and on the right, Banur. The Sirhind Bridge takes the road to Sirhind Fort “destroyed by the Sikhs”.  Beyond that, on the bank of the river Sutlej on the right is the Maikhor garden built by Fidai Khan and Qasba Ropar. After passing an old serai, the road reaches Lashkar Khan’s Sarai and beyond that the Serai of Ludhiana with Ghat Manchiwara on the right and Qasba Payak on the left.

The corresponding stages, 14-17, in the printed account describe the roads of Sirhind as excellent, “with many wells, fountains, and shady mango trees on each side, and the lands in the highest state of cultivation”. The next stage is “quite deserted, and only fit for an army to halt at”. At Ludhiana the Zamindars (landowners) are recently converted Muslims, formerly Rajputs. The roads are shaded with a number of wells, mango orchards and tanks. The local chiefs are Tara Singh and Ghaiba Singh. 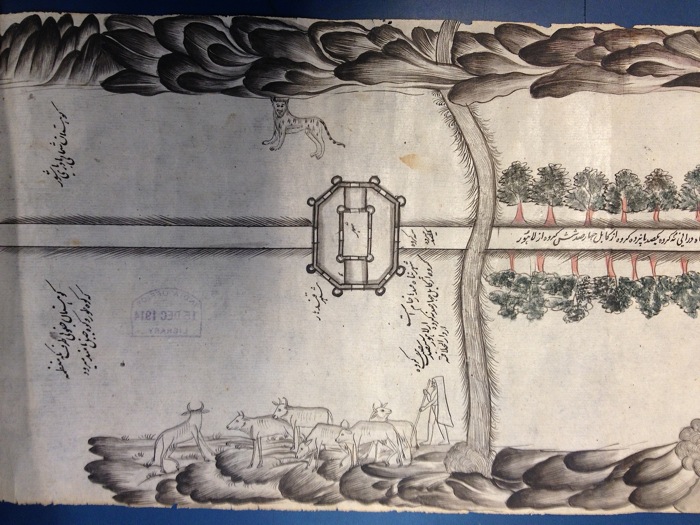 The final destination is the city of Kandahar situated 118 kroh from Kabul, 409 from Lahore and 667 from the capital Shahjahanabad. The road continues westwards with the mountains on the north leading to the Darya-i Shur, while the southern mountains face Mecca, leading to Tur and Jabal.

Susan Gole, Indian Maps and Plans: From Earliest Times to the Advent of European Surveys. New Delhi, India: Manohar Publications, 1989. Includes a reduced facsimile copy of IO Islamic 4725, together with a complete translation of the Persian text

Respected Sir/Madam,
I am doing a project on the old Agra Lahore road as it passes through my ancestral village Khan-i-khanan. Is it possible for me to view the map between Lahore to Serai Amanat Khan on the web. Can you send me a link.
Regards
Jasdeep

Reply:
I'm afraid the map isn't online, but if you email me ([email protected]) I might be able to help,
Ursula