A particularly enigmatic manuscript in the British Library’s collection is IO [India Office] Islamic 3113A, a sumptuously decorated Qur’an which, according to the detached label that accompanies it, was copied by the Mughal emperor Shah ʻAlam (1643-1712).

The opening pages of the Qurʼan, containing the Sūrat al-Fātiḥah (‘the opening’) and the beginning of the Sūrat al-Baqarah (‘the cow’). The upper panels contain the chapter (sūrah) headings and the lower panels contain Qur’anic verses, on the right: ‘None touch it except the purified’ (Sūrah 59:79) and on the left: ‘It is a revelation from the Lord of the Worlds’ (Sūrah 69:43). (IO Islamic 3113A, ff. 1v-2)

The manuscript consists of 209 folios, each highly decorated with very few repetitions in the design. The beginning of each of the 30 sections (juzʼ) is easily recognisable by its dense illumination whereas the remaining folios are slightly less ornate. The final chapter is followed by a two-line prayer in a different hand, below which is given a date: fī tārīkh sannah 1141 (1728/29). It seems probable that the concluding prayer and the date were added after the manuscript was completed, perhaps by a later owner who might also have done the fairly extensive repairs which have been painted and written over. The paper itself is of an inferior quality. 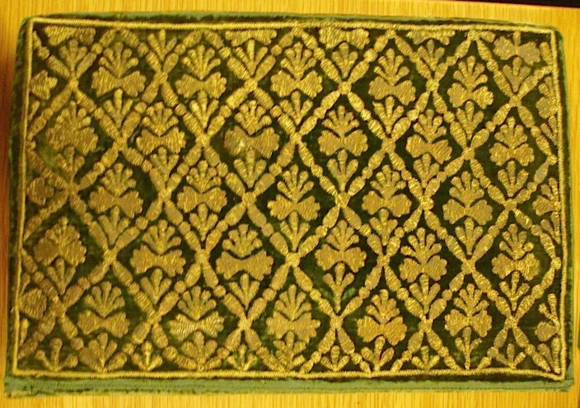 The Qurʼan is bound in green velvet, worked with silver thread

Accompanying the manuscript is a label claiming that the copyist was Shah ʻAlam, Awrangzeb’s successor who ruled as Bahadur Shah I from 1707 to 1712. The contemporary historian Mustaʻidd Khan writes in his Maʻāsir-i ʻĀlamgīrī that, while still a boy, prince Muḥammad Muʻaẓẓam Shāh ʻĀlam had acquired a perfect knowledge of the Qurʼan: “He is deeply read in Arabic, and the fluency and elegance of his diction are the wonder of the very Kurán-readers of Arabia.” It would be tempting to link this Qurʼan with him, but in the absence of supporting evidence it can only remain a suggestion. Another puzzling fact is that at the end of the manuscript the date 1141 (1728-29) had been added in a different hand. However Shāh ʻĀlam I (Bahādur Shāh) had died by then and Shāh ʻĀlam II  would have been less than a year old! How the manuscript was acquired by the India Office Library and the identity of the previous owner seem, unfortunately, to be unrecorded.

Below are some examples demonstrating the individual character of the illumination. I hope that by making this Qur’an more generally known readers may be able to let us know of any parallel examples. 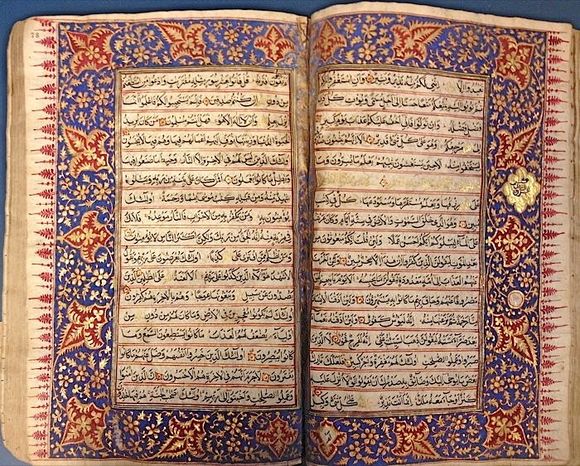 The Qur’ān is divided into 30 sections to facilitate a monthly reading schedule. In this manuscript the beginning of each section is easily recognised by the densely decorated margins. The line of gold marks the beginning of section 12 (IO Islamic 3113A, ff 77v-8) 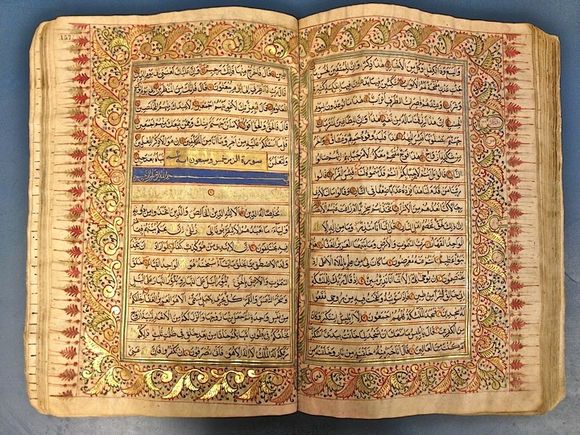 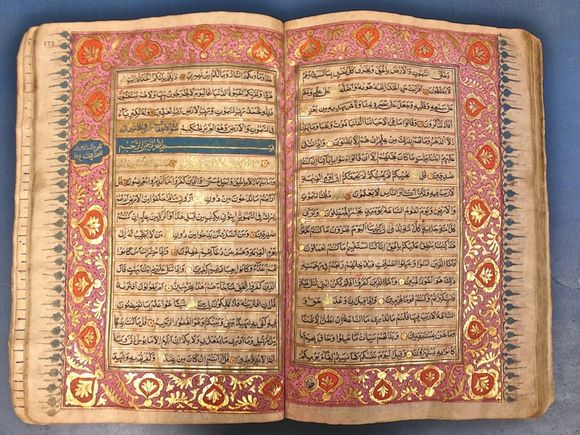 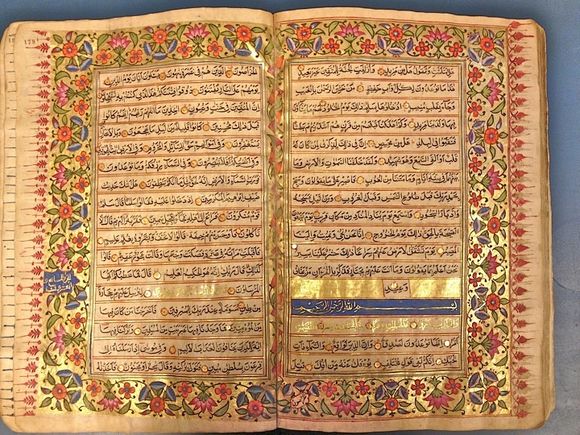 Posted by Ursula Sims-Williams at 11:46 AM