A farewell to the Mughals

Since opening in November 2012, we have been surprised by the overwhelming response from the press and social media. We never anticipated being interviewed by Mark Lawson on Radio 4's Front Row, Sean Rafferty on Radio 3's In Tune, or even GQ India in their November 2012 issue. Other media highlights include the BBC History slide show and video coverage of the Delhi panorama in the Telegraph.

If you missed the exhibition, here are a few photographs of the show 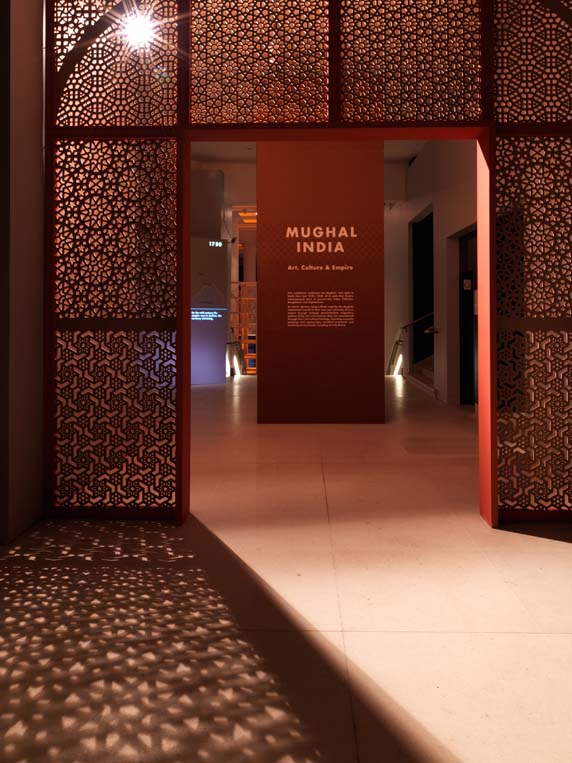 Entrance to the exhibition

The beautiful geometric designs for the jali screens were designed by our exhibition design team - Plaid designs and Bibliotheque Designs. 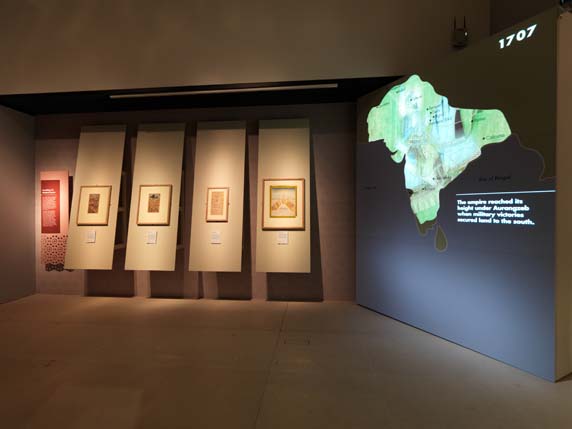 The introduction to the exhibition featured an animated map - which documented the geographic expansion and contraction of the empire from 1526-1858. 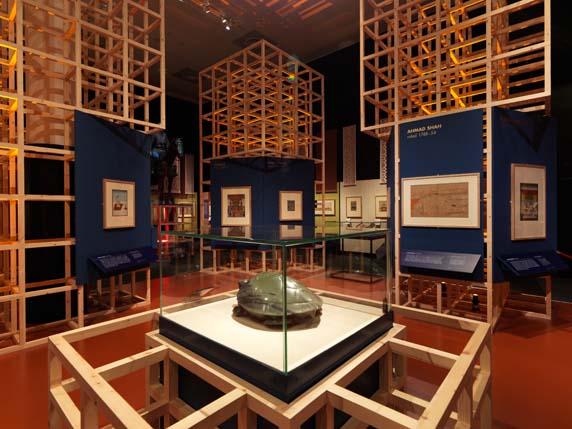 The Ruler's Gallery showcased 15 major Mughal emperors, starting with the founder of the empire Babur (ruled 1530-30) and ending with the last Mughal emperor Bahadur Shah II (ruled 1837-58). In the centre, is the fantastic jade terrapin, which was on loan from the British Museum. 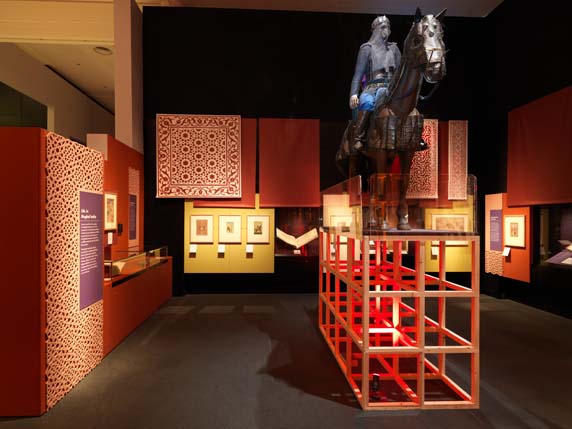 This section introduced the empire and its administration, foreign and international relations, as well as court life. Highlights in this section included the 17th-century Mughal cavalryman (on loan from the Royal Armouries in Leeds), the journal of Sir Thomas Roe, as well as an instructional poem for pigeon fanciers. 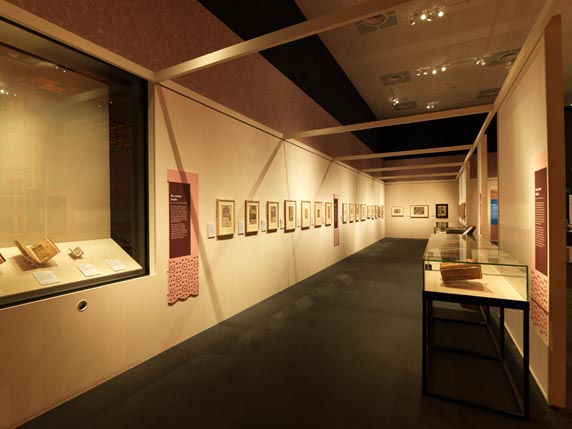 The Art of Painting

A chronological overview of the Mughal tradition of painting, starting with the establishment of the Mughal artistic studio charged with producing illustrated manuscripts and paintings. Highlights of the section include an imperial copy of the Khamsa of Nizami produced for the Emperor Akbar in 1595-96, a copy of the Divan of Hafiz belonging to Emperor Jahangir, as well portraits of princes and princesses and other notable officials. 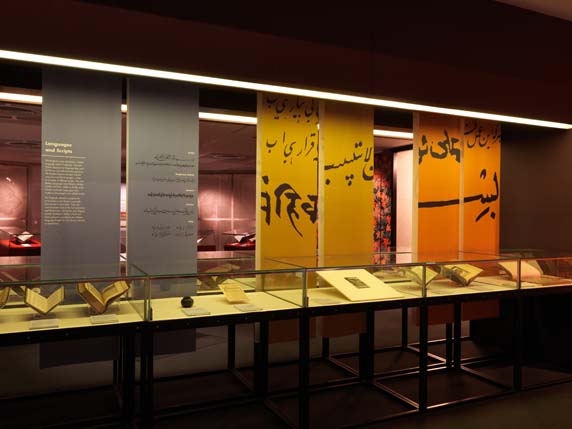 Persian was the main language of culture and administration. Persian literature so flourished in the subcontinent that at times more literary works were produced there than in Iran. This section of the exhibition was devoted to exploring the diversity of languages used at the court as well as introducing notable poets and authors who wrote in Hindi, Urdu and Persian. Here we featured calligraphy by the Mughal emperor Bahahdur Shah 'Zafar' who was an influential poet and calligrapher. 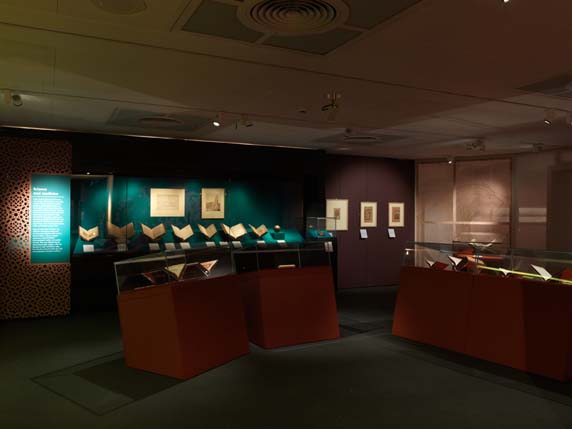 Under Mughal patronage the sciences were actively cultivated and in many fields a fusion of Indian and Islamic scientific traditions yielded significant advances. In researching scientific manuscripts of the period, we discovered the transfer of knowledge from East to West. 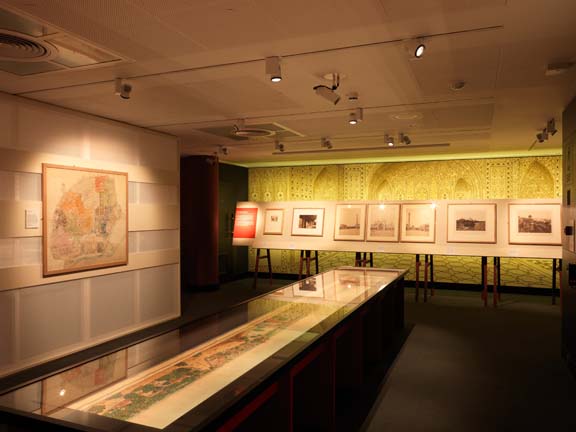 Decline of the Empire

By 1805, the empire had drastically reduced in size. Brutal wars of succession, compounded with the sacking of Delhi by Nadir Shah in 1739, were contributing factors. In the last decades of Mughal rule, the political authority of the emperor was restricted; the British controlled the surrounding territories. In 1858, after the failed Uprising against the East India Company, the Mughal dynasty finally came to an end. In this photograph, you can see the 5-metre long panorama of Delhi, painted by the artist Mazhar Ali Khan in 1846. 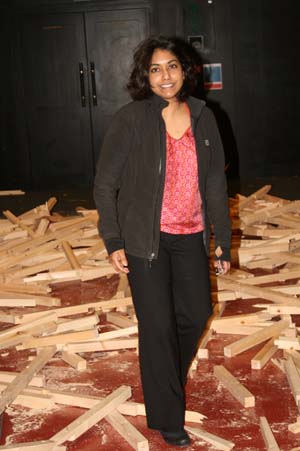 Lead Curator - Malini Roy - in the gallery after all the exhibits were removed and the towers came down!

The British Library’s Mughal India exhibition was the first to document the entire period, from the 16th to the 19th centuries, through more than 200 exquisite objects. The majority of the exhibits were drawn from the British Library's own collection. For further information, please see: