On display in the recent exhibition ‘Mughal India’ was Add.14373, a set of astronomical tables, the Zīj–i jadīd-i Muḥammad Shāhī (‘Muhammad Shah's new tables’), by Maharaja Sawai Jai Singh of Jaipur (1688-1743), which arose largely as a translation of tables by the French astronomer Philippe de La Hire, taken from the 2nd edition of 1727 (see below Tabulae astronomicae). Jai Singh had developed a strong interest in mathematics and astronomy, and was commissioned by Muhammad Shah to collect data based on Islamic, Hindu and European knowledge. After learning what he could from locally available sources he sought the help of the Jesuit missionaries in his effort to get up to date. 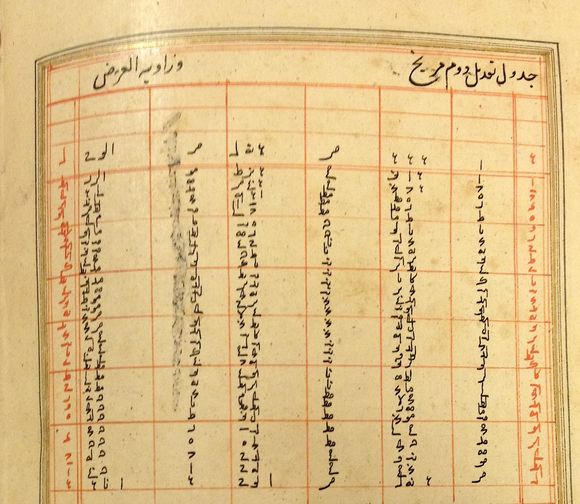 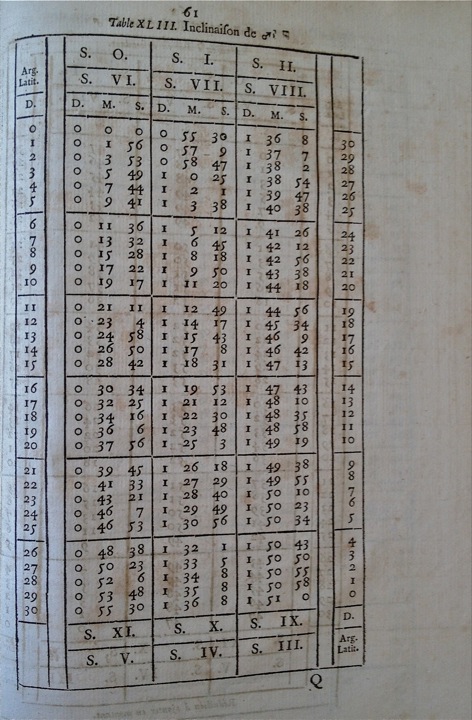 A copy of de La Hire’s work is to be found still in the Library in the Palace in Jaipur and this has bound with it a few pages written in Latin in 1732 by a French visitor of the time, Joseph Dubois. It is clear that Dubois was very much acquainted with Jai Singh’s efforts. During a visit there in 1985 I made a copy of these notes with a translation which I later published (see below “Account...”,  p.157). There we learn that Jai Singh,

on discovering the Almagest of Father P. [recte G.B.] Riccioli, saw as he had known previously, that there was a great discordance in his native tables, so that I had translated into the language of the Indians the Persian tables ordered by Shahjahan, formerly the Emperor of the whole of East India, which cost 100,000 rupees. Here he found a discordance of up to one degree. As a result a certain Father of the Society of Jesus, of the Portuguese nation, and Rector of the College in Agra of the same Empire, was sent by him (the Ruler) to seek an expert astronomer in Europe. The Father went and returned, and brought with him the tables which I have described, along with other mathematical aids, as a gift from the King of Portugal. A certain young man, educated by the Father in India, and born endowed with great ability, by name Petrus da Silva, also Portuguese, studied astronomy at Riet Clarissima with Father John Baptist Carbone, and came to the Ruler. The Ruler very happily ordered the tables to be transcribed into his script, and orderd all his astronomers to make calculations by them. Now he longs for someone to go to Paris and London to drink of astronomy at the source.

The Father who went to Portugal was the Jesuit Manuel Figueredo, accompanied by Pedro da Silva Leitão, a Portuguese man who had attained a privileged position at the court of Jai Singh. 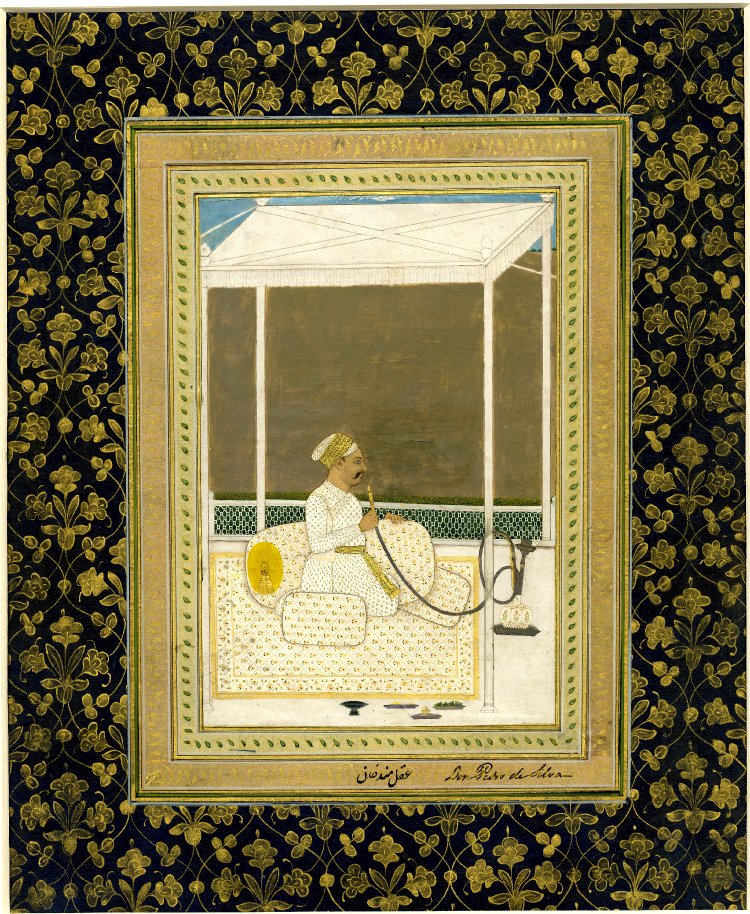 Portrait of the Portuguese physician and astronomer Pedro da Silva by ʻAqlmand Khān (1920,0917,0.88.2) © Trustees of the British Museum

There are in the Portuguese archives (Arquivo Português Oriental, and Assentos do Conselho do Estado) many references to both Figueredo and da Silva, and we have also a note about the grave in the Christian cemetery in Agra of Pedro da Silva (very likely the same man) showing that he died on 13 November 1791 (List of Inscriptions on Christian Tombs, p. 52).

Several days later, in the boats (pallas) from Damão, Father Manuel de Figueredo of the Society of Jesus, missionary to the Court of Agra and Ambassador from the Moghul to the King, arrived at Goa accompanied by two Moor Princes of that Emperor who later came with the Ambassador to Lisbon. The Jesuit Ambassador made his public entrance dressed as a Moghul, and received his first audience in the Royal Hall of the Fortress of Goa, which was conducted by the head or Governor of Goa, and by the Tanadar-mor, showing him all the civil and military honours customary on such occasions, and consigning the letter from the Prince ... (Assentos 5, p. 631)

The Viceroy obtained in 1737 Dec through a Portuguese physician named Pedro da Silva Letão, who assisted the King of Jaipur Rajah Sawai Jaisingh, in his Court,... (Assentos 5, p. 521)

We learn also of others who had come from Lisbon, unnamed, but described in these archives as ‘two mathematician fathers’, who arrived at the court of Jaipur.

While there were many astronomical researches in the earlier Islamic period such scientific activity had slowed down after about the year AD 1000. Important research, however, took place in Maraghah, Damascus and Samarkand in the 13th, 14th and 15th centuries. This constituted a legacy of Islamic work which was transmitted to both East and West. In the Mughal period, for example the work of Ulugh Beg of Samarkand was well-known, and parts of it (mainly the trigonometrical and geographical tables) were included in the Zīj of Jai Singh. The tables of sun, moon and planets, however, were taken over unaltered from de La Hire. By his time European astronomy had undergone quite revolutionary developments at the hands of Copernicus, Galileo, Kepler, Halley, and of course Newton. All of that was entirely unknown not only in Mughal India but in the rest of the Islamic world. The introduction of de La Hire’s tables alone proved to be of little consequence in the development of Mughal astronomy.

List of Inscriptions on Christian Tombs and tablets of historical interest in the United Provinces of Agra and Oudh, E.A.H. Blunt, Allahabad, 1911

Posted by Ursula Sims-Williams at 8:25 PM