A digital version is now available online of the highlight of the British Library’s Korean collections, a lavishly illustrated manuscript entitled Records of the ritual presentation and banquet in the kisa year (Kisa chinp'yori chinch'an ŭigwe' 己巳進表裏進饌儀軌) produced in 1809. 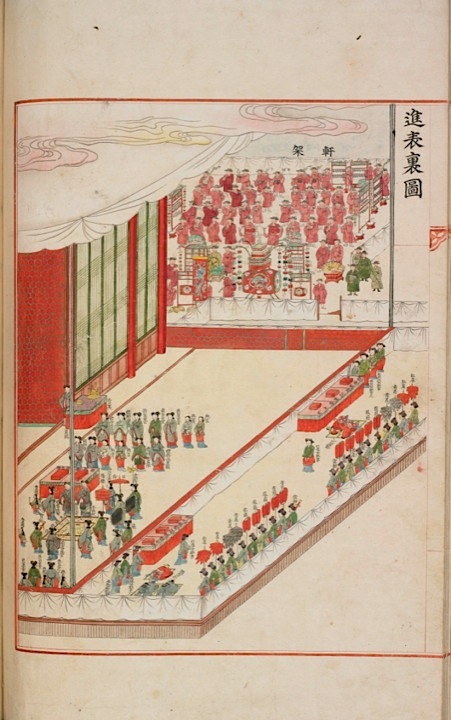 Arrangement of the Hall of Bright Spring for the presentation ceremony (Or.7458, fol. 11 verso)

The manuscript was created for the Korean Royal Court as a record of the ceremonies conducted in the first and second months of 1809 to mark the 60th anniversary of the consummation of the marriage of Lady Hyegyŏng 惠慶宮 (1735-1815), grandmother of the reigning King Sunjo. Lady Hyegyǒng was married in 1744 at the age of 9 to Crown Prince Sado (1735-1762), son and heir of King Yǒngjo. However, the marriage was only consummated 5 years later when she and her husband reached adulthood and it is the anniversary of this event which is commemorated in the British Library's manuscript. Crown Prince Sado became mentally unstable and was eventually put to death on his father’s orders by being locked in a rice chest till he starved. Lady Hyegyǒng survived her husband’s disgrace and her own subsequent fall from favour. She lived to see her son and grandson, Kings Chǒngjo and Sunjo, ascend the throne, in 1776 and 1800 respectively, and was ultimately elevated to the rank of Queen Dowager. Lady Hyegyong left a vivid account of her life, Hanjungnok (Records of Silence), which has been published in translation several times, most recently as The Memoirs of Lady Hyegyong (see below). The ceremonies organised in 1809 were part of the King Sunjo’s desire to make amends for the past ignominies his grandmother had suffered and no expense was spared. The manuscript provides a faithful record in words and images of the formal presentation of cloth (chinp’yori) and of the banquet (chinch’an). There are detailed plans of the layout of the palace halls where the events took place, lists of the edicts issued to regulate them and of the court officials involved. However, the most striking section of the manuscripts are the 18 folios of meticulous paintings showing the buildings, regalia, musicians, musical instruments, furniture and floral decorations used in the ceremonies. 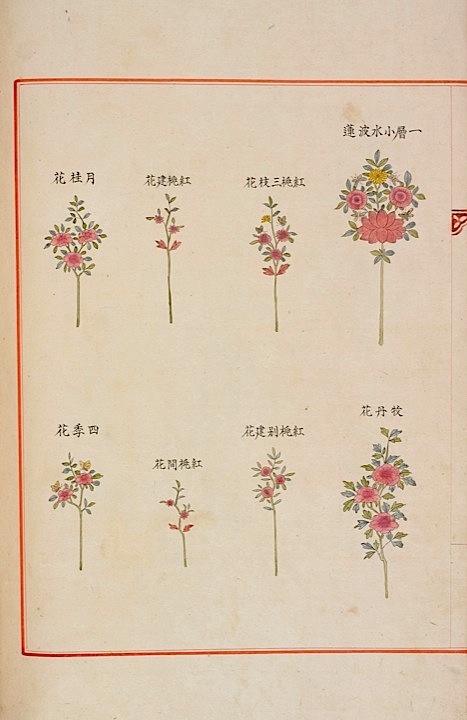 Commemorative manuscripts of this type, called in Korean ǔigwe, were produced for many royal events in Chosǒn Period Korea. Usually several copies were produced, the finest being kept as a “royal viewing copy” with other less elaborate versions being housed for safety in repositories in different parts of Korea. One of the most important of these archives was housed in the Oegyujanggak on Kanghwa Island in the estuary of the Han River which was looted in 1866 by a French naval contingent under Admiral Roze in retaliation for the murder of French missionaries. The contents of the library were taken back to France and for many years were kept in the Bibliothèque Nationale de France. In 2010, after years of intergovernmental negotiation, a total of 297 ǔigwe were returned to Korea on a long-term renewable loan.

The exact provenance of the British Library’s manuscript and the circumstances under which it left Korea are unclear. What is known from documents in the BL archives is that it was purchased by the British Museum in 1891 for £10 from a certain H Fauré, a Parisian cheese merchant. It is clear that he was an agent acting on behalf of the actual owner whose identity is not revealed in the extant documents. The manuscript was transferred from the British Museum to the British Library on its establishment in 1973.