The British Library is currently mid-way through a three-year partnership project with the Iran Heritage Foundation UK (with additional support from the Bahari Foundation and the Barakat Trust), to open up access and increase awareness of our collection of over 11,000 Persian manuscripts. These originate from Iran, Central Asia and India, and range in time from the 12th century to handwritten and typed texts of recent years. They include some of the most famous illustrated Persian and Mughal manuscripts, several of which were recently on view in our exhibition Mughal India: Art, Culture and Empire (if you couldn't make it, see our recent post ‘A farewell to the Mughals’).

Our aim is to construct reliable and consistent metadata describing each manuscript, and to have the bulk of the collection catalogued in digital format by the end of 2014, subject to funding. Details of over 2,000 works have already been added to FIHRIST, a web-based catalogue providing a searchable interface for manuscripts in Arabic script from the major manuscript collections in the UK.

A second part of our digital project is to digitise and put online 50 manuscripts over the next two years. So far we have uploaded the entire text of Shah Tahmasb’s copy of Nizami’s Khamsah (Or.2265) and the three poems by Khvaju Kirmani (Add.18113), copied in Baghdad in 1396. These can be read cover to cover on British Library Digitised Manuscripts. 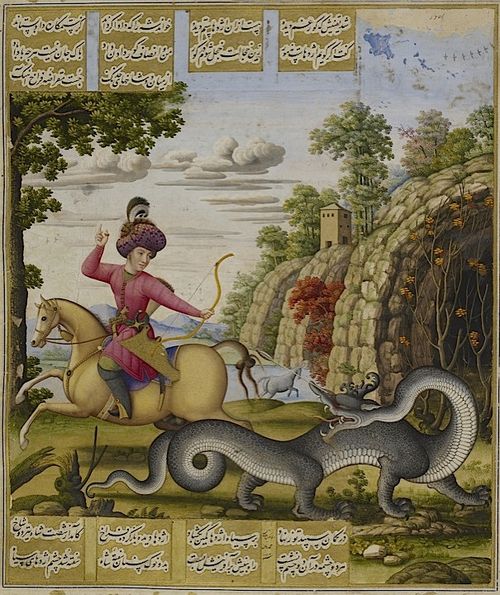 Over the next few months we'll be adding the following manuscripts — so watch this space! 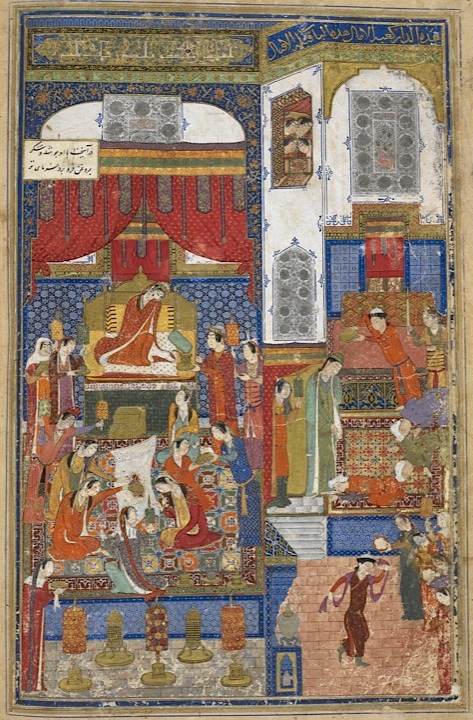 From the Kulliyat of Khvaju Kirmani, copied in 1396. In this painting, by the artist Junayd Naqqash Sultani (his name is inscribed in an architectural block above the bed), Humay has gold coins poured on him as he leaves Humayun's room, the day after their wedding (Add.18113. f.45v). Find this online

We are now seeking funding for further digitsation. If you would like details or are able to help in any way, please visit our page ‘Opening up Access to the Persian Collections’.

Posted by Ursula Sims-Williams at 5:24 PM