Traditional Thai medicine is a holistic discipline involving extensive use of indigenous herbal and massage/pressure treatment combined with aspects of spirituality and mental wellbeing. Having been influenced by Indian and Chinese concepts of healing, traditional Thai medicine understands disease not as a physical matter alone, but also as an imbalance of the patient with his social and spiritual world.

Thai medical manuscripts written during the 19th century give a broad overview of different methods of treatment and prevention, of the understanding and knowledge of the human body, mind/spirit and diseases. In 1831, King Rama III ordered the compilation of various medical treatises to be used as teaching materials for the newly established royal medical schools at Wat Phrachetuphon (Wat Pho) and Wat Ratcha-orot in Bangkok. Wat Phrachetuphon formally became the first Royal School of Medicine in 1889 and still runs a Thai Traditional Medical School today. 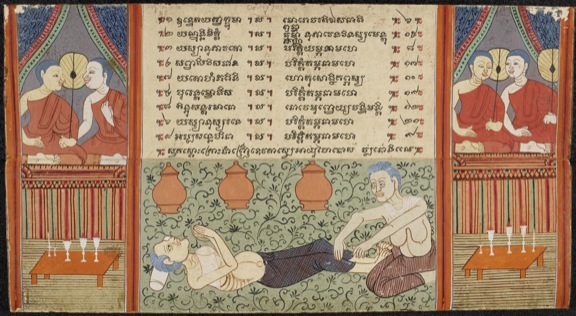 This folding book, containing extracts from the Vinaya Pitaka and the legend of Phra Malai (a monk who is believed to have travelled to heavens and hells through the powers of meditation), depicts two elderly women, one massaging the legs of the other woman lying down on the floor with her hands folded in prayer. In the background earthenware vessels contain traditional medicines, which were usually boiled in big pots and then taken throughout the day (Or 13703, f. 81).

Medical manuals and handbooks (khamphi phaetsāt songkhro) describe the anatomy and physiology of the human body, diseases and their possible causes, and methods of diagnosis and treatment. Some of these books are finely illustrated with human figures and diagrams; sometimes the human figures themselves appear like diagrams, particularly in massage treatises (tamrā nūat). Other manuals contain knowledge in the field of midwifery and herbalist practices including recipes for the preparation and use of herbal medicines (tamrā yā samunphrai). Most of these manuals were based on the knowledge and texts used by the royal physicians at the Thai court. Thai traditional medicine can be traced back to the Dvaravati (6th-13th centuries) and Sukhothai (ca.1238-1438) kingdoms according to stone inscriptions and pharmaceutical artefacts. Under King Narai (1656-1688), the first Thai pharmacopeia known as ‘Tamra Phra Osot Phra Narai’ was compiled by royal physicians.

According to the medical treatises, the human body consists of 42 elements, belonging to four groups (earth, wind, water and fire). If one or several of these elements are in disorder, it causes disease. The traditional Thai physician would have to find out which elements were unbalanced and why, and then try to restore the balance between them. This could be achieved by various methods, which included treatment with herbal and other supporting natural remedies, pressure points massage and body or head massage, as well as physical exercise (Yoga), meditation and dieting – or a combination of several of these methods.

This lavishly illustrated paper folding book (samut khoi) with black lacquered covers is a manual for pressure massage in Thai language and script. It describes the channels in the body terminating in pressure points and how pressure massage can be used to treat certain illnesses. It is believed that the book was produced at Wat Phrachetuphon, Bangkok, in the first half of the 19th century as the text clearly relates to the medical inscriptions from that time on the walls of this royal temple, which is adjacent to the royal palace.

It begins with an unlabelled large gilded diagram of the human body (Or 13922, ff. 1-5, shown on the left). It gives an introductory overview of the network of channels within the body. The figure is shown wearing lavish gilt royal headgear and the main pressure points are also gilt, whereas the rest of the body has been drawn in black ink. The area around the navel is a central point where many channels start.

This manuscript can be viewed in full on our digitised manuscripts webpage.

The diagram below (Or 13922, f. 32) indicates the channels and main pressure areas of the body, stylistically represented by spiralling calligraphic lines. One channel known as pinkhalā, for instance, begins at the navel and proceeds past the base of the right leg to exit via the back. Another channel, the susumannā line proceeds from the navel into the chest, climbs through the body and exits through the tongue. 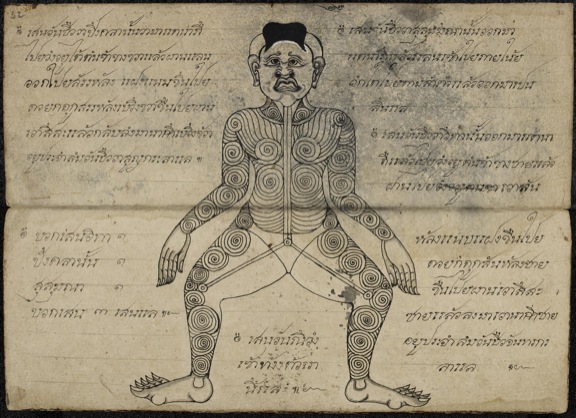 In most of the diagrams, the pressure points are named and their functions are described in detail. The fleshy areas of the body are all neatly labelled as such, so that the book also gives insight into the Thai understanding of the human anatomy. Each illustration indicates the points of the body that can be treated with pressure massage, which diseases can be treated and how many times certain points have to be massaged. 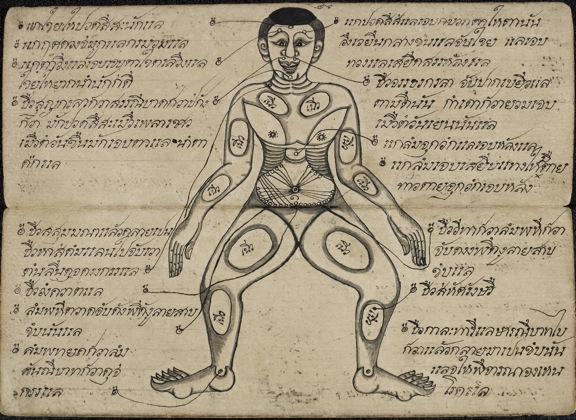 Here the pressure point above the right eye is identified as the one for treating pains and infections of the eye as well as dizziness. In the middle of the forehead is a point for treating headaches, fevers and congestion of mucus and haemorrhage in the nasal passage. (Or 13922, f. 36)

Lively descriptions of situations where pressure massage was carried out can be found in one of the most notable Thai literary works, Khun Chang Khun Phaen, a lengthy narrative of love and death which began in a folk tradition of oral performance (sēphā), but was adopted by the royal court and transformed into written text in the early 19th century. Quite often, it seems, pressure massage was the method of first choice in emergencies such as this (Chris Baker and Pasuk Phongpaichit (eds.), The tale of Khun Chang Khun Phaen. Siam’s great folk epic of love and war. Chiang Mai, 2010, p. 236):

Her body was motionless. ‘Wanthong, oh Wanthong!’ No sound came in return. With body trembling, she shouted, ‘Servants! Come to help, quick!’ The servants all came up in a rush. They propped Wanthong up. They wept. They massaged both her legs. They pressed between her eyebrows to open her eyes. Siprajan cried out, ‘Softly, now! Why don’t you massage her jaw?’ She sat with a kaffir lime in her hand, staring vacantly. ‘Do everything you can, everything.’ Someone bit Wanthong’s big toe, and then she murmured.

Posted by Ursula Sims-Williams at 10:56 AM

Very helpful and informative post on the massage manuscripts, of which little has been written in English. Thanks!