The Shahnameh as propaganda for World War II

The British Library’s newly opened exhibition Propaganda: Power and Persuasion includes a number of exhibits relating to Asian and African Studies, one of which is a series of postcards dating from World War II based on an episode from the famous Persian epic the Shahnameh, or ‘Book of Kings.’ 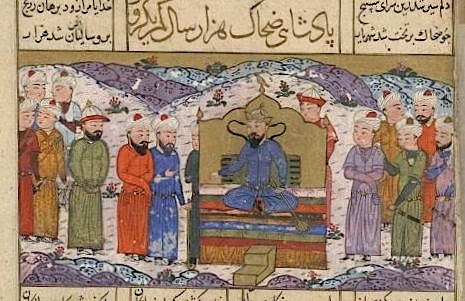 Zahhak enthroned, with serpents rising from his shoulders. From a provincial Timurid Shahnameh from Mazandaran dated 850/1446 (Or.12688, f22r)

The Shahnameh, written by Firdawsi (940-1025), tells the history of Iran in verse over the course of 55,000 rhyming couplets, from its mythical origins in pre-history to the end of Sasanian empire (AD 650), and includes many of the classic stories that have come to be emblematic of Persian culture, such as the love stories of Khusraw and Shirin and Bizhan and Manizheh, as well as the exploits of the Herculean hero Rustam and his tragic encounter with his son, Sohrab. Through his authorship of this epic poem, Firdawsi is credited with saving the Persian language at a time when Arabic had become the paramount language of religion, culture and power. 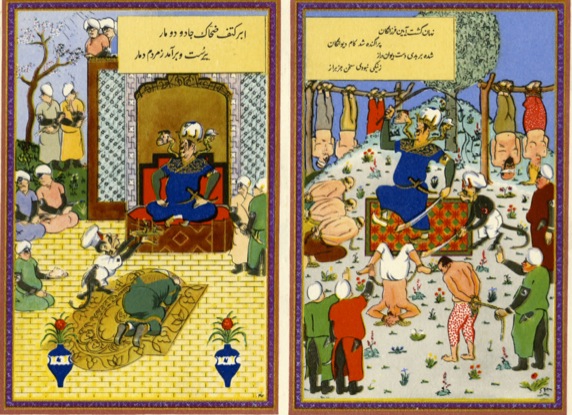 Left: the moment when Ahriman-Goebbels, disguised as Zahhak-Hitler’s cook, causes serpents with the faces of Mussolini and Tojo to grow out of his shoulders. Right: Zahhak-Hitler executing the innocent and tyrannising the population (COI Archive PP/13/9L) Images on line

The postcards on display in the current exhibition use the myth of the tyrant Zahhak in an attempt at rendering anti-German propaganda more relevant to Iranian cultural sensibilities. The Iranian scholar Mojtaba Minovi (1903 -1976) was working for the BBC Persian service during World War II, editing the pro-Allied newspaper Ruzgar-i Naw. When asked for advice on an effective propaganda campaign for Iran, he suggested using stories and imagery from the Shahnameh (see Wynn, p. 4) to appeal to the Iranian people. Minovi’s advice was taken and the images were created in 1942 by Kimon Evan Marengo (1904-1988), known by the sobriquet Kem, a prolific creator of propaganda cartoons for the British during the war.

The tyrant Zahhak, who features as Hitler in the postcards, epitomises an oppressive and barbaric ruler who brings to an end the enlightened rule of Jamshid. One understanding of Firdawsi’s tale is that Zahhak is symbolic of the Arab invaders who brought an end to the Sasanian Empire and supposedly to Persian civilisation. After Zahhak fully displays his capacity for barbarity, Ahriman (i.e., Iblis or Satan) causes serpents to grow from his shoulders that require a daily feeding of human brains, with victims chosen from among the youth of Iran. After years of reigning in terror, Zahhak has a dream of his downfall in which three warriors approach on horseback, one of whom is Feraydun, from whose face farr (the light of kingliness and justice) emanates. After this dream, a blacksmith, named Kaveh, arrives at Zahhak’s court requesting the release of his son, one of the youths who is to be fed to the snakes on Zahhak’s shoulders. In front of his court, Zahhak feigns mercy and releases Kaveh’s son, but later asks Kaveh to sign a document attesting to his mercy. Kaveh refuses to falsely affirm the justice of a tyrant and tears up the document. He then raises his blacksmith’s banner on a standard, foments a popular rebellion and goes in search of Feraydun, the future king who would rid Iran of Zahhak’s injustice and brutality. At the end of this episode, Feraydun dethrones Zahhak but rather than killing him, binds him in Mount Damavand to be tortured by the snakes on his shoulders until the end of time. 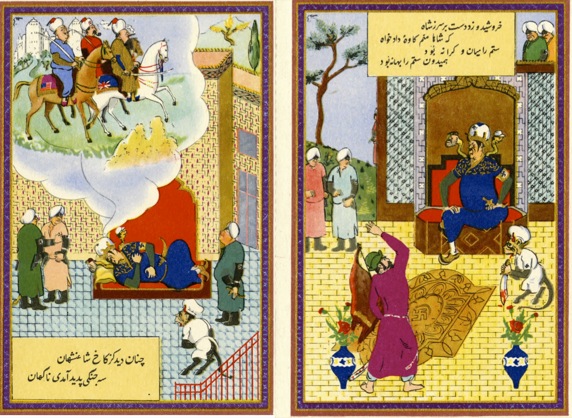 Left: Zahhak-Hitler’s dream, in which the three warriors who will cause his demise appear – here depicted as Chuchill, Stalin and Roosevelt. Right: Kaveh, the symbol of liberation for the Iranian people, coming before Zahhak-Hitler and raising his blacksmith’s apron as a banner of rebellion (COI Archive PP/13/9L) Images online 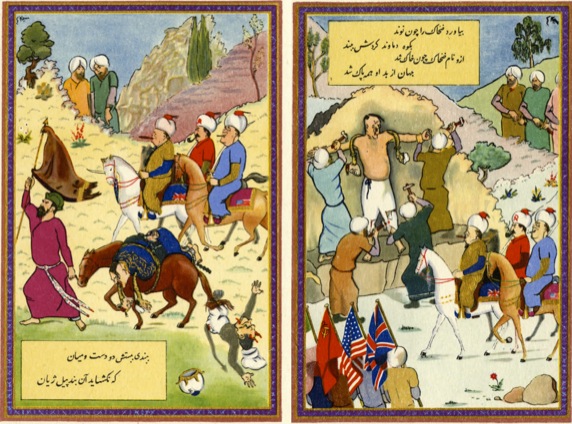 Left: the arrival of the promised warriors, Churchill leading the way with his cigar, following by Stalin with his pipe and Roosevelt with his cigarette in its signature holder. The trio are, of course, led by the symbol of Iranian national liberation, Kaveh with his banner, suggesting that an Allied victory would be a triumph for the Iranian people and not an occupation. Right: Zahhak-Hitler is nailed to Mt Damavand by the liberated Iranian people, with the Mussolini and Tojo snakes on his shoulders appearing rather deflated as the trio of western leaders gaze benevolently at the scene (COI Archive PP/13/9L) Images online

My sincere thanks to Drs Melville, Ansari and Motadel for their help in explaining the postcards and pointing me in the direction of the relevant literature.

Excellent internet resources on the Shahnameh are:
A website devoted to the Shahnameh exhibition of 2010 at the  Fitzwilliam Museum Cambridge
The digital Shāhnāmah Project database

Posted by Ursula Sims-Williams at 9:51 AM