A Buddhist sutra and illustrated cover

Among the collection of 40,000 or so books and manuscripts discovered in 1907 by Sir Aurel Stein in cave 17 of the ‘Caves of a Thousand Buddhas’ near the city of Dunhuang in China,  were large numbers of scrolls including 31 written in Khotanese, a Middle Iranian language which was used between the 5th and 10th centuries in the Buddhist kingdom of Khotan on the southern branch of the Silk Route (present-day Xinjiang-Uygur Autonomous Region of the People’s Republic of China). Of them, the Buddhist scroll Ch.c.001 (IOL Khot S.46) is by far the largest, measuring over 21 metres. It was copied in Dunhuang in the mid 10th century for a Buddhist patron Śāṃ Khīṅä Hvāṃ’ Saṃgakä who, in return, requested long life for himself and his family. 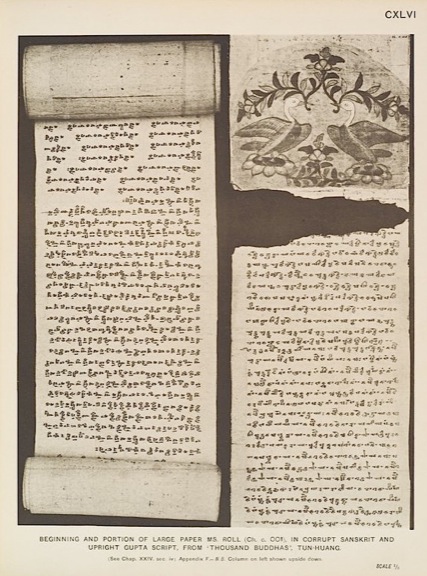 The scroll is dated in four colophons written over a period of six months in the year of the Hare (AD 943) and includes Buddhist esoteric Mahāyāna and Tantric works written in Sanskrit and Khotanese. The first two are Sanskrit dhāraṇīs (incantations): Buddhoṣṇīṣa-vijaya and Sitātapatra (ll. 1-198), and these are followed by further texts in Khotanese: Bhadrakalpika-sūtra, a list of the names of the Buddha (ll.199-754); two almost identical deśanā (confession) texts on the same subject (ll. 755-851 and 1062-1101); and the Mahāyāna Sumukha-sūtra (ll. 852-1061), in which the Bodhisattva Vajrapāṇi and several other deities promise to protect anyone who recites and learns the sūtra. 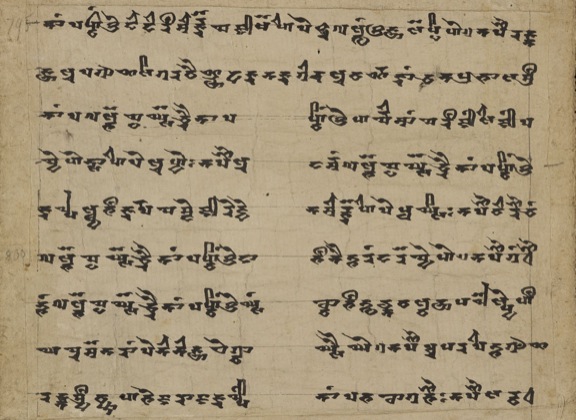 To judge from its size and the care taken to preserve it, the patron, Śāṃ Khīṅä Hvāṃ’, must have been an important person. Almost certainly he can be identified with Hvāṃ’ Śāṃ Khīṅä (i.e., 王上卿  Wang Shangqing) described as a donor in both Khotanese and Chinese on a Dunhuang painting of Vaiśravana (also completed in the year of the Hare), which is preserved in the Bibliothèque nationale Paris (Pelliot Tib 0821). The importance of the patron is also suggested by the quality of the silk painting, which was originally glued to the back of the scroll and served as a cover, secured by ties. 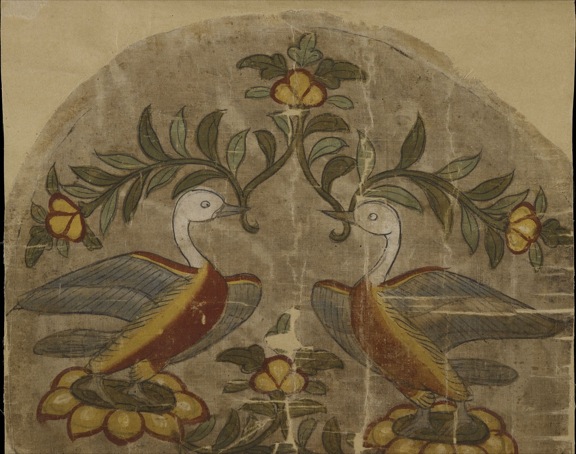 The painting shows a pair of birds, possibly swan geese, standing on lotus flowers and holding budding branches in their beaks. The motif of the wild goose, frequently mentioned in Dunhuang literature, is well attested in Tang painting, lacquerware, silver and ceramics, appearing, for example, on the Dunhuang banner headings MAS 876 and 877 (Ch.00304.a and b), both preserved in the British Museum. 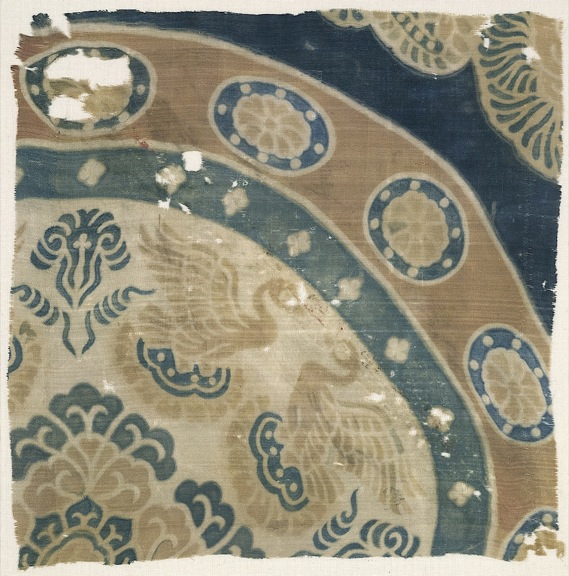 British Museum MAS.876: one of two square-shaped fragments of plain woven silk patterned with the clamp-resist dyeing technique. The pattern consists of two motifs: a dominant large roundel with encircled rosettes and a narrower inner roundel, enclosing four paired geese; and a four-petalled flower in the centre, and the other secondary quatrefoil. The repeat in the warp direction is about 56.6 cm but it is unclear in the weft direction. Another fragment from the same textile (but without geese) is in the State Hermitage Museum, St Petersburg (Дх51). Image from IDP

To find out more about the Stein collection and finds from Central Asia, visit our International Dunhuang Project Database website at idp.bl.uk. This collaborative database holds over 400,000 images from the major Central Asian collections worldwide.

Posted by Ursula Sims-Williams at 11:48 AM