A Judeo-Arabic serial issued in Bombay

Published in Bombay from 1856 to 1866, the serial Doresh tov le-‘amo takes its Hebrew title from a biblical verse (Esther 10:3) which roughly translates as  'Seeking good for one’s people', a fitting name for a journal purporting to inform and educate the community.  The English subtitle The Hebrew Gazette was only added with the eleventh issue.  In the first two years of circulation the journal appeared fortnightly, then weekly until 1866 when publication finally ceased.

Printed by lithography, the language used throughout is the Judeo-Arabic dialect of the Baghdadi Jews penned in their distinctive Hebrew cursive script. Due to these peculiarities, the journal’s readership was obviously limited to the Baghdadi Jewish community.  The first two issues were lithographed on blue paper by Sason ben David Sason who, as acting editor, set out the main goals of the journal in an opening essay.  Thereafter, editorial responsibility passed on to David Hayim David, Doresh tov le-‘amo  being subsequently printed on white paper, except from  numbers 8, 9 and 16 for which blue paper was again used. 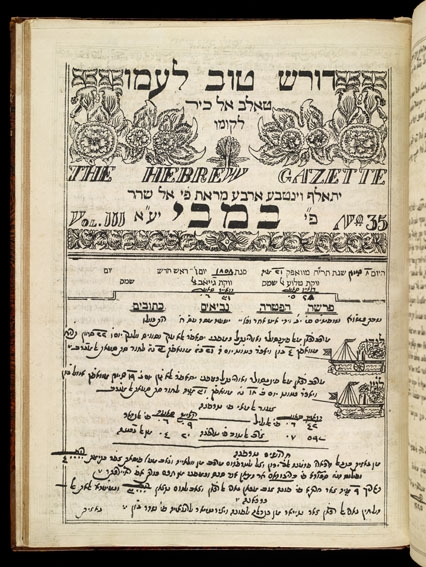 The serial’s most salient features are undoubtedly its unique calligraphy and decorated front pages of individual issues, particularly those printed in the years 1857-1858.  As seen– in issue no.35, vol.3, June 1858 – the ornamentation is fairly simple consisting mainly of floral embellishments flanking the title panel and a pair of sketchy steamboats serving as text markers.

Each issue imparts a wealth of information, ranging from general news such as the movement of ships in and out of Bombay harbour, to notices relating to the local Baghdadi Jewish community, such as for example weddings and philanthropic acts.  Historical articles and short accounts on overseas Jewish communities were published only occasionally.

The front pages are excellent sources of information in their own right, the one shown here being no exception.  Not only does it provide details of the weekly Torah portion and prophetical readings for the Sabbath service, but it also shows the tidal periods and even the exact timing of the cannon firing at the Fort of Bombay.  The first steamboat, marked 'London' in Hebrew script, announces the sailing of a ship to England via Aden and Suez on June 4th 1858.  The ship, which was serviced by the Peninsular and Oriental Company, ran a postal collection the day before sailing. 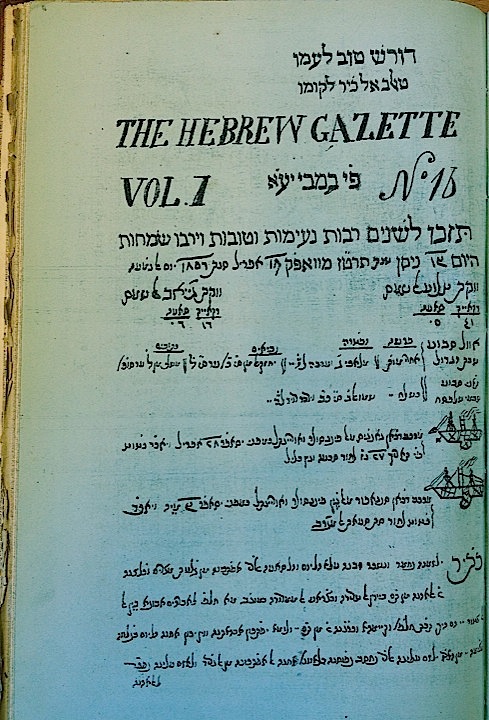 This journal provides a fascinating insight into the social and cultural habits of the Baghdadi Jews of Bombay, as well as glimpses of Indian life in the early second half of the 19th century.

Posted by Ursula Sims-Williams at 1:57 PM