A rare example of Chinese calligraphy by Sir Ernest Satow

In 2004 the British Library acquired a hanging scroll (Or.16054) which is one of only two known examples of the Chinese calligraphy of the diplomat, scholar and bibliophile Sir Ernest Mason Satow (1843-1929).  The text is a Chinese poem in five-character quatrain form composed by the Tang Dynasty poet Wang Bo 王勃 (650-676) on the subject of a garden in spring and the feelings of nostalgia it evokes.  Although undated the scroll was probably written in the mid-1870s since Satow has signed it as Seizan 静山, the artist’s name bestowed on him in February 1873 by his calligraphy teacher. 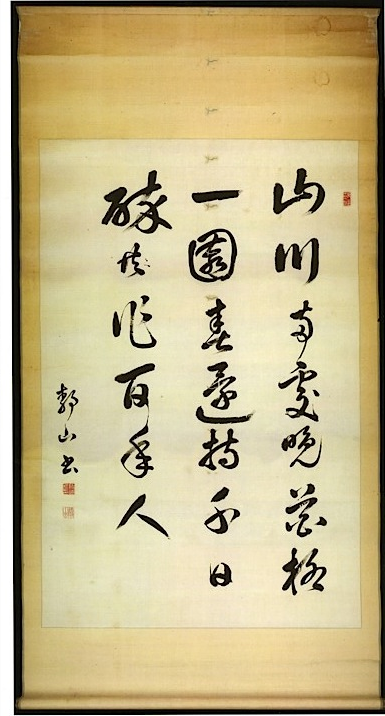 Satow was a diplomat who in the course of his 45-year’ career served in Japan, Siam, Uruguay, Morocco and China.  However, it was Japan that was closest to his heart, in more ways than one.  He spent a total of 25 years there from 1862-1884 and then, as Minister Plenipoentiary, from 1895-1900, immersing himself in many aspects of Japanese culture.  He also acquired a Japanese common-law wife, Takeda Kane 武田兼 (1853-1932) and had two sons and a daughter.

Satow arrived in Japan in 1862 at the age of 19 to take up a post as interpeter.  Having already received some instruction in the Chinese language during his time in Shanghai and Beijing, he immediately set about mastering spoken and written Japanese, becoming completely fluent within two years. He later took lessons in Tang-style calligraphy from Takasai (Kōsai) Tanzan 高斎単山 and this hanging scroll is the result of this study.

In his memoirs, A Diplomat in Japan, Satow wrote of his unfortunate early experiences with the art of Chinese calligraphy:

I also took writing lessons from an old writing-master, whom I engaged to come to me at fixed hours.  He was afflicted with a water eye, and nothing but a firm resolve to learn would ever have enabled me to endure the constant drip from the diseased orbit which fell now on the copy-book, now on the paper I was writing on, as he leant over it to correct a bad stroke, now on the table. 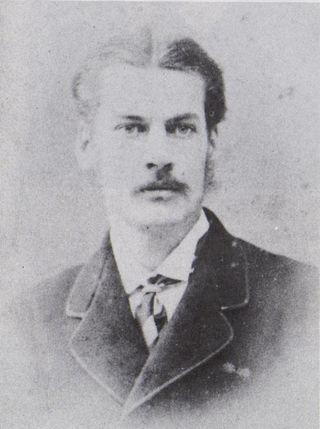 Satow as a young man in Paris, December 1869.
Source Wikimedia Commons. Original now in the
Yokohama Archives of History.

For over 30 years, Satow devoted much of his time to the wide-ranging study of Japanese history and culture, writing on subjects as diverse as Shinto mythology, the Japanese syllabary, Korean potters in Satsuma, the Ainu, the introduction of tobacco to Japan, the cultivation of bamboo and the use of the fire-drill.  He had a particular interest in bibliography and wrote pioneering works on the Jesuit Mission Press in Japan and the development of early movable-type printing in Japan and Korea.

At the same time Satow amassed a large collection of important examples of rare Japanese printing of which 325 works in 1,578 volumes were acquired by the British Museum in 1884 and 1885 and is now a key part of the British Library’s Japanese collections.  The Satow collection covers all the key phases in the development of printing in Japan from its earliest beginnings with the ‘Million Charms’ (Hyakumantō darani 百万塔陀羅尼) of 770 AD, through the era of the Buddhist monopoly of woodblock-printing from the 12th to 16th centuries, to the flourishing of printing with movable type between the 1590s and 1640s and the dawn of commercial publishing in the early Edo Period (1600-1868). The calibre of the collection is shown by the fact that of 637 works contained in Kenneth Gardner’s Descriptive Catalogue of Japanese Books in the British Library Printed before 1700, no fewer than 179 come from Satow including 47 works printed before 1600 and 72 early movable-type editions.

In his memoirs Satow was very modest about his skills with the brush but whatever the merits of the calligraphy itself it is testimony to his dedication to, and deep interest in, the languages of Japan and China, and as such it seems highly fitting that, after more than 120 years, it is now once again united with the books he so painstakingly collected.