As an American living in London, each year I feel a slight bit of nostalgia on the 4th of July for fireworks, enjoying a barbeque and of course having the day off. Instead of watching the fireworks, today I write about my favourite scenes relating to fireworks painted in South Asia from the Visual Arts collection. 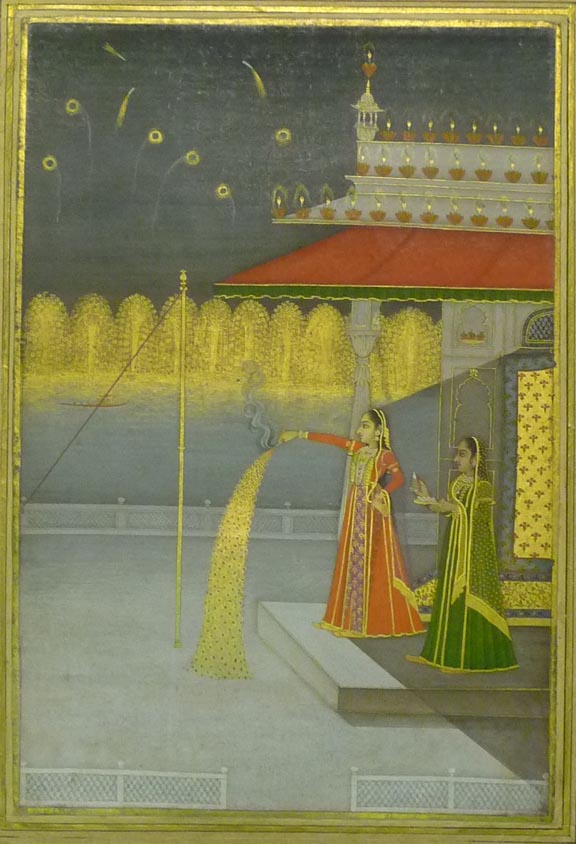 The night of Shab-i-barāt, the fourteenth day of the month of Sha‘bān of the Islamic calendar, is an auspicious occasion. The evening is celebrated with fireworks, feasting and prayers in the names of ancestors. On this evening, the affairs of the living for the forthcoming year are arranged by God. In this scene, a Mughal lady standing on a terrace lets off a firework. In the background, the distant river bank is illuminated by burning fireworks.

The Mughal Emperor Jahangir describes the celebration of Shab-i-barāt in August 1617:  'In the end of Thursday, the 26th, corresponding with the 14th Sha‘bān, which is the Shab-i-barāt, I held a meeting in one of the houses of the palace of Nūr-Jahān Begam, which was situated in the midst of large tanks, and summoning the Amirs and courtiers to the feast which had been prepared by the Begam, I ordered them to give the people cups and all kinds of intoxicating drinks according to the desire of each. Many asked for cups, and I ordered that whoever drank a cup should sit according to his mansab and condition. All sorts of roast meats, and fruits by way of relish, were ordered to be placed before everyone. It was a wonderful assembly. In the beginning of the evening they lighted lanterns and lamps all round the tanks and buildings, and a lighting up was carried out the like of which has perhaps never been arranged in any place. The lanterns and lamps cast their reflection on the water, and it appeared as if the whole surface of the tank was a plain of fire. A grand entertainment took place, and the drinkers of cups took more cups than they could carry.' 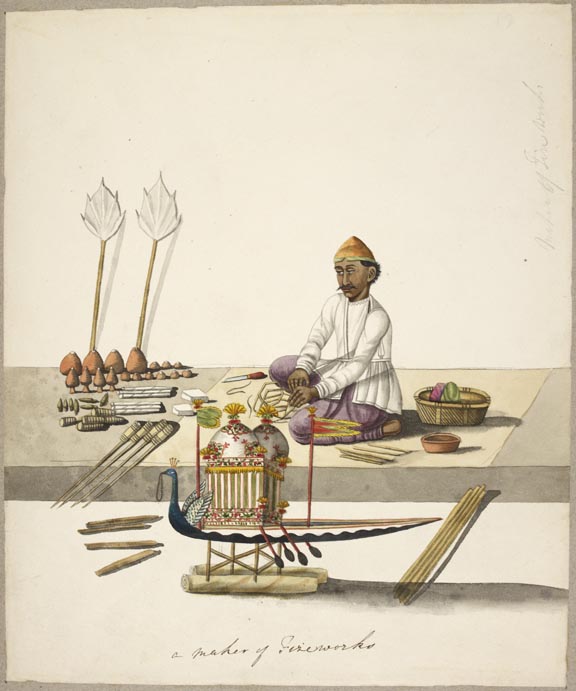 This scene of a firework maker is from a series depicting trades and occupations produced for the Marquis Wellesley when he was the Governor-General of India. The style of this painting and the rest of the series are painted in the Company style, referring to the hybrid style that emerged in India during the 18th and 19th centuries as a result of European influence and patronage. Wellesley, an active collector and patron of Indian art, also commissioned series of Natural History drawings as well. This watercolour is part of an album that was purchased by the India Office Library on 16 August 1866. 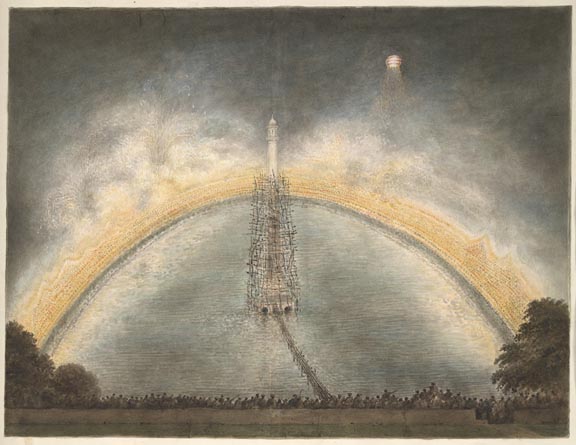 Illuminations and fireworks round the lake at Constantia by Sita Ram, 1814-15

This watercolours and the following are from the Hastings Albums, a collection of ten albums of watercolours primarily painted by the Indian artist Sita Ram. The artist accompanied Lord Moira (afterwards Marquess Hastings), the Governor-General of Bengal and the Commander-in-Chief (1813-23) on a journey from Calcutta to Delhi in the period 1814-15. This series includes scenes of elaborate illuminations and firework displays lit on important occasions.

Constantia or La Martinière was built by Claude Martin in Lucknow, Uttar Pradesh, during the late 18th century. Martin, originally from Lyon, France enlisted with the British East India Company. In Lucknow, his services as an architect were in great demand and he designed several notable buildings including Constantia. Originally intended to be used as a private residence, it is now used as a school for boys. This scene features the ground with a column, a memorial to Claude Martin, which was still under construction when he died in 1800. Inscribed below: 'Illumination at Constantia on the receiving news of Peace in Europe' (2nd November 1814). 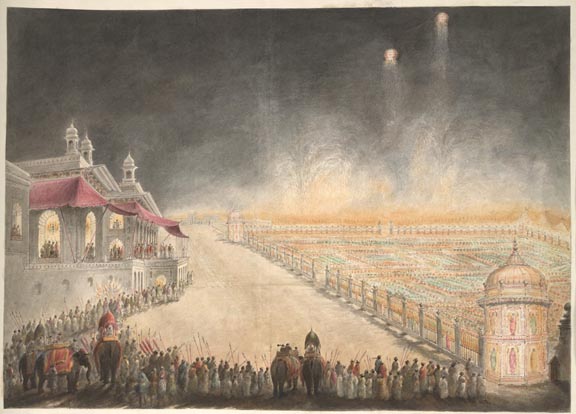 The grounds of the palace of Farhat Baksh in Lucknow lit by innumerable coloured lamps by Sita Ram, 1814-15

Claude Martin’s villa, Farhat Baksh, also in Lucknow, was designed by the Frenchman in 1781. Martin applied a hybrid of classical, neo-Palladian and the Nawabi styles to create his villa.  After Martin's death, the local governor Nawab Saadat Ali Khan of Awadh (ruled 1798-1814) purchased the villa, renaming it Farhat Baksh and constructed several additions to transform it into a palace. This view shows the grounds of the palace of Farhat Bakhsh in Lucknow lit by innumerable coloured lamps, with transparencies of female figures attached to the pavilions and railings and illuminated behind, and with fireworks. On the terrace of the palace of Farhat Bakhsh, the Nawab and his guests stand admiring the illuminations, while crowds of onlookers stand in front. Inscribed below: 'View of the Illuminations at the palace of Furruh Bukhsh, 1814'. The rows of figures and the elephants facing away from the viewer adds to the drama of the sky lit up at night.