The complete collection of Malay manuscripts in the British Library is to be digitised thanks to a generous donation of £125,000 from Singapore-based American philanthropists William and Judith Bollinger. The five-year project, in collaboration with the National Library Board of Singapore, will fund the digitisation of materials of interest to Singapore held in the British Library. In addition to Malay manuscripts, early maps of Singapore and selected archival papers of Sir Thomas Stamford Raffles – who founded a British settlement in Singapore in 1819 – will also be digitised and made freely accessible online.

For centuries, the Malay language has played an important role as the lingua franca of trade, diplomacy and religion throughout maritime Southeast Asia.  It was the language through which Islam spread across the archipelago from the 13th century onwards; it was the language in which visiting merchants from the Middle East, India, China and Europe would barter for spices in the rich port cities of Melaka, Patani, Aceh, Banten and Makassar; and it was the language through which British and Dutch colonial officials communicated with local sultanates. Until the early 20th century Malay was generally written in a modified form of the Arabic script known as Jawi, and Malay manuscripts originate from the present-day nations of Indonesia, Malaysia, Singapore, Brunei and the southern regions of Thailand and the Philippines. 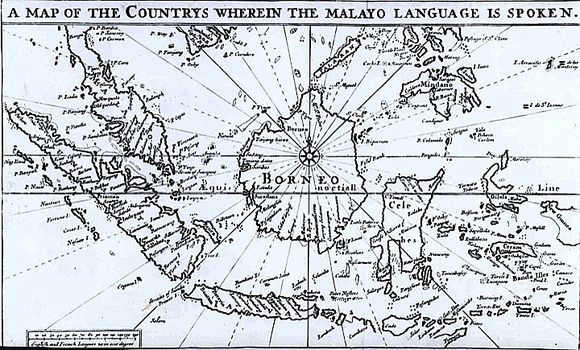 A map showing the area over which the Malay language was commonly spoken, from the first original Malay-English dictionary, by Thomas Bowrey, 1701  (British Library, 68.c.12)

The British Library holds over a hundred Malay manuscript texts and several hundred Malay letters and documents, dating from the 17th to the 19th centuries. These manuscripts derive mainly from the historic British Museum collections, including Malay books owned by John Crawfurd, who served under Raffles during the British administration of Java from 1811 to 1816, and then as Resident of Singapore from 1823 to 1826, and from the India Office Library (which became part of the British Library in 1983), which holds Malay manuscripts belonging to John Leyden, Raffles’s closest friend and advisor, who died of fever shortly after the British capture of Batavia in 1811; Col. Colin Mackenzie, Raffles’s Chief Engineer in Java; as well as a few manuscripts previously owned by Raffles himself.

Although not large, the British Library collection of Malay manuscripts includes some very important works, including the oldest known manuscript of the earliest Malay history, ‘Chronicle of the kings of Pasai’, Hikayat Raja Pasai, (Or.14350), describing the coming of Islam to Sumatra; two copies of the most famous Malay historical text, the ‘Malay Annals’, Sejarah Melayu, (Or.14734 & Or.16214) recording the glories of the great kingdom of Melaka up to its capture by the Portuguese in 1511; literary works in both prose (hikayat) and verse (syair), some of which – such as the intriguingly-named ‘Story of the Pig King’, Hikayat Raja Babi (Add.12393), written by a merchant from Semarang during a voyage to Palembang in Sumatra – are unique copies; as well as texts on law and Islamic religious obligations.  A few of the manuscripts are exquisitely illuminated, including a fine copy of an ethical guide for rulers, ‘The Crown of Kings’, Taj al-Salatin, copied in Penang in 1824 (Or.13295). 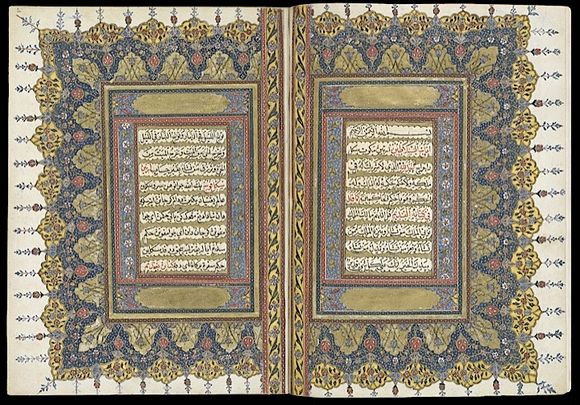 The Malay manuscripts are being digitised in the British Library and will be fully available on the Library’s Digitised Manuscripts online (search on keywords ‘Malay’ or ‘Jawi’), while the National Library Board of Singapore will also be mounting the images on their BookSG website. Thus through this project, manuscripts which previously could only be viewed by visiting the British Library’s reading rooms in London will soon be made freely accessible online worldwide to anyone with an interest in Malay heritage and culture.

Over the next few months, on this blog we will be exploring in more detail individual manuscripts as they are digitised and made available online. If you would like to keep in touch, subscribe by email (at the top of this page) and follow us on Twitter @BLAsia_Africa.

Posted by Ursula Sims-Williams at 4:00 PM