Earlier this week, my colleague Nur Sobers Khan (Iran Heritage Foundation Curator of Persian Manuscripts) wrote about the emperor Aurangzeb pondering the afterlife.  She discussed a little known manuscript commissioned by the emperor entitled 'The Book of Traditions on the Hereafter'.  This blog and a previous one on Islamic jurisprudence refers to Aurangzeb's religious orthodoxy. This period in history was a great challenge for local artists. In fact, his views on Islam is one of the contributing factors that led to a decline in the Mughal painting tradition. Today's blog will look at depictions of Aurangzeb painted during his lifetime from 1619-1707.

Illustrated histories of the Mughal emperors are a starting point to look for portraits of the princes and the ruling elite. The Padshahnama, the official account of Aurangzeb's father Shah Jahan's reign, was written by the historian Muhammad Lahori. Shah Jahan ruled from 1627-58. The illustrated version in the royal collection at Windsor is the only surviving contemporary version. The manuscript, however, only corresponds to Lahori’s first volume and the first ten years of Shah Jahan’s reign. From a cursory overview, the manuscript casts light on the nuances of Shah Jahan’s relationship with Aurangzeb. As compared to his siblings, Aurangzeb was less frequently painted. In the Padshahnama, artists document the milestones and personal achievements of the princes. In the above scene, Shah Jahan embraces his eldest and favourite son Dara Shikoh. His two younger sons, Shah Shuja (dressed in yellow) and Aurangzeb (dressed in green) appear on the left waiting for their turns. They are accompanied by their grandfather Asaf Khan. In this scene, Aurangzeb is only 9 years old. Other key events featuring Aurangzeb include the prince facing a maddening elephant named Sudhakar in June 1633 and his father Shah Jahan honouring him at his wedding on 19 May 1637. 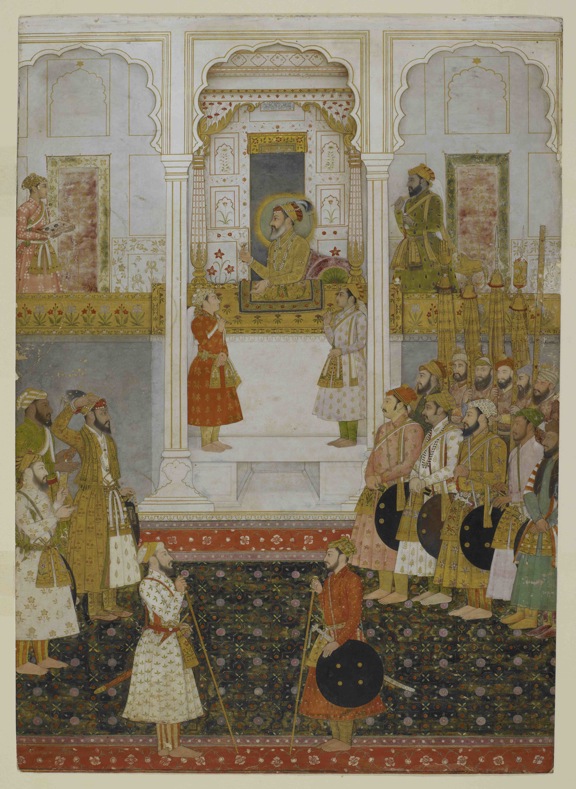 Another painting which related to the official history written by Muhammad Lahori, but prepared for a later (now dispersed) illustrated volume of the Padshahnama, features Aurangzeb reporting to Shah Jahan in 1649 (above). In this imperial durbar (official assembly) scene, Shah Jahan is seated in the jharoka (balcony for official ceremonies) inside the Divan-i 'Am or Hall of Public Audiences. This building is located in the Mughal fortress and complex in Lahore. Aurangzeb is picture standing on the left, next to other courtiers, though with his arm raised in salute to his father. Less than ten years after this event, Aurangzeb imprisoned his father in the Agra Fort, outmanoeuvred his brothers and arranged for their deaths in order to become emperor. Aurangzeb's eldest brother Dara Shikoh was the heir-apparent and favourite son. Aurangzeb claimed the throne in 1658. His father died in prison in 1666.

An exceptional military commander, Aurangzeb drastically expanded the geographic boundaries of the empire to include the Deccan plateau in central India. State revenues prospered, but constant wars to retain control of his territories gravely damaged the state finances. During his lifetime, Aurangzeb was often represented in one of two ways: either as a warrior for Islam or as a devout Muslim ruler reading a Qu'ran. As compared to the lavish paintings of Shah Jahan's period, the artistic style radically changed. Artists tended to paint simple individual portrait studies. The paintings were often painted in the nim-qalam (tinted drawing) technique with hints of and gold. Artists seemed to steer away from the developed backgrounds landscape settings. In fact, it was exceptionally rare for artists to paint historic scenes. Contemporary accounts do not offer a precise explanation for the decline in the painting traditions. Contributing factors may have included Aurangzeb’s curtailing of state expenditure, banning histories in praise of the emperor, forbidding music and dancing for pleasure at the court, and increased religiosity. In this equestrian portrait, Aurangzeb is depicted symbolically as an austere ghazi or warrior for Islam. He is dressed in full armour and holds a gold lance. His rearing horse is ready for battle and covered with chain-mail. From his belt hang a quiver of arrows and a push dagger called a katar. 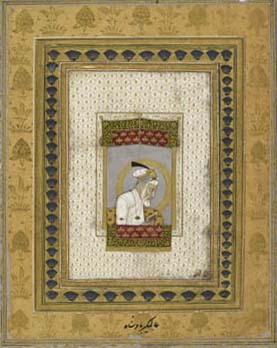 Aurangzeb left northern India for the Deccan in 1681, never to return. An increasingly orthodox Muslim, he re-instated the poll-tax levied on non-Muslims, revived the power of Muslim clerics, and fostered a political and social divide based on religion. The last portrait of Aurangzeb pictures the devout Muslim ruler in profile, with a downward gaze at a manuscript held in his hands, most likely to be the Qur’an. Dressed in stark white garments, his appearance is in sharp contrast to the golden radiance of the halo, the floral patterned bolster and the luxurious carpet hung on the window ledge. For Aurangzeb, there was no greater personal accomplishment than to memorise every verse and chapter of the Qur’an. Having committed to memory the entire text, he wrote two copies of the Qur’an in perfect calligraphy. This style of portraiture, featuring Aurangzeb in his old age and hunched over a manuscript, was commonly produced and suggests that artists felt that this was the most appropriate type of pictorial format to depict the elderly ruler.