Some Syriac Manichean Treasures in the British Library

Founded by Mani in Mesopotamia in the 3rd century AD, Manichaeism was for a time one of the most widespread religions in the world. Under the protection of the Sasanian emperor Shapur I (r.241–72), Mani preached a fundamental dualism based on light (good) and darkness (evil), the world being a contamination of the two (this idea is seen in the Zoroastrian creation myth, see my recent post ‘Zoroaster’s Egg’). God had given the same message to the Buddha, Zoroaster and Jesus, but it had become distorted over time through oral misrepresentation. Mani therefore stressed the importance of the written text and also the use of paintings to illustrate his teachings. His religion was strongly influenced by Christianity and Zoroastrianism but came to be regarded as heretical by both.

The British Library is lucky enough to have some of the most important Manichaean texts in its collections, and recently we hosted a special viewing to celebrate the 8th International Conference of the International Association of Manichaean Studies, held at the School of Oriental and African Studies (SOAS). It was a momentous occasion, probably the first time that such important works had ever been looked at together, and certainly too good an opportunity to miss to write about them! 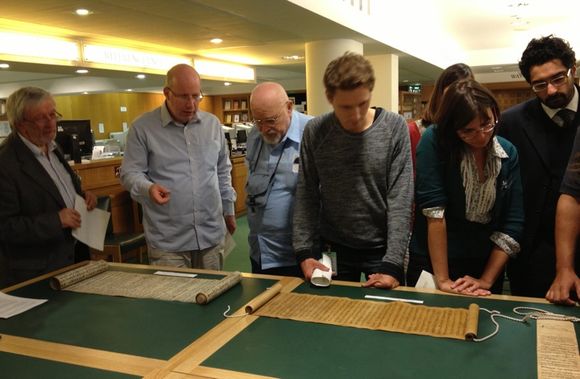 Manichaean scholars examining two Chinese scrolls: on the left the Manichaean Hymn Scroll (Or.8210/S.2659) and on the right the Compendium of the teachings of Mani, the Buddha of Light, dated AD 731 (Or.8210/S.3969)

Some of the oldest and most valuable sources on Manichaeism are in fact Christian anti-Manichaean writings, written only a century after Mani’s death (AD 274 or 277). The best-known are perhaps the Confessions, written in Latin in AD 397-8, of St. Augustine of Hippo who was himself a Manichaean before converting to Christianity.  One of the most important sources in the British Library is the Syriac manuscript Add.12150 which contains the treatise Against the Manicheans by Titus (d. 378) of Bostra (Bosra, now in Syria), translated from Greek. This codex is additionally important, being the oldest known dated Syriac manuscript, in near perfect condition, and copied in Edessa in the year 723 of the Seleucid era (AD 411). 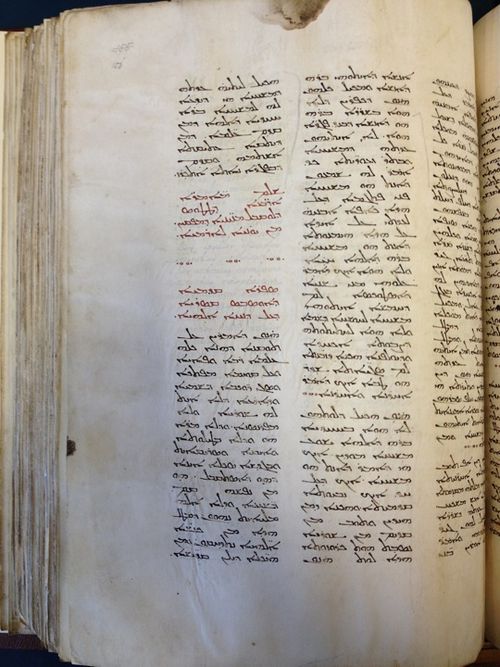 Equally important are Add.14574 and Add.14623, both parts of the only surviving copy of the Prose Refutations of Mani, Marcion, and Bardaisan by Saint Ephrem (c. 306–373). This 6th century codex had at some point been broken up. 88 leaves (Add.14623) were washed and scrubbed to obliterate the original text, and then re-used in Egypt in 823 by a monk, Aaron, originally from Dara in Mesopotamia. Ironically, part of the original manuscript containing Ephrem’s Discourse on Virginity, apparently thought fit to preserve, was copied into the new manuscript before being erased. Fortunately the first 19 leaves (Add.14574) escaped the treatment and both parts are now in the Library's collection. Add. 14754 was acquired by the British Museum from a monastery in the Wadi Natrun in Egypt (as was Add.12150) by Archdeacon Tattam in the 19th century (for an account of how the Museum came to acquire them, see pp. xi-xiv of W. Wright’s Catalogue of the Syriac Manuscripts in the British Museum, vol. 3). 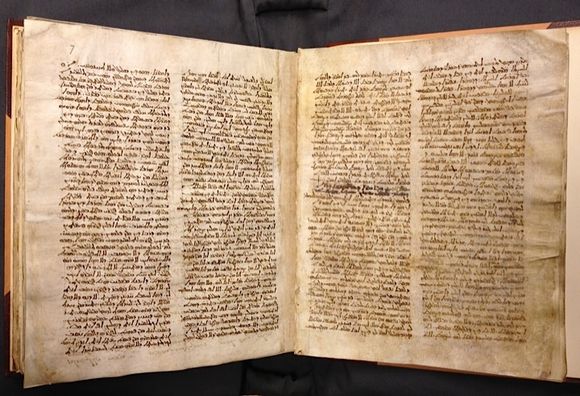 Detail of the bottom of folio 7r, turned upside down, showing Ephrem’s work underneath

It required the painstaking efforts of Charles Mitchell, a Canadian Syriac scholar teaching at Merchant Taylors’ School, London, to decipher the concealed text. From 1905 until the First World War he devoted his leisure time to reading what he could of the palimpsest which was extra problematic on account of the skin it was written on. “Worst of all” he wrote in the introduction to his edition (Mitchell 1912),  “only one side of the leaves could be read, except in two or three cases, though there was evidence that the writing was lurking in obscurity below.” Mitchell also complained that “Accurate deciphering is only possible under a good sunlight” and the London weather had held him back further. 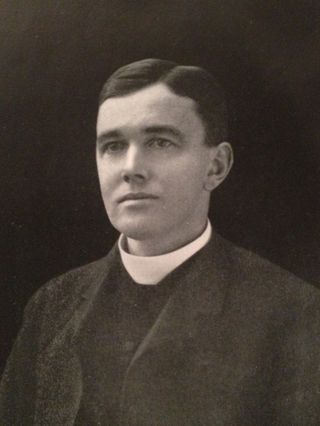 Mitchell's patience and perseverance led, Dr. Barnett, then Keeper of Oriental Manuscripts at the Museum, in 1908 to apply a “re-agent” to the illegible part of the palimpsest. This had the effect of revealing the underwriting so clearly that it became possible to transcribe almost the entire contents. Mitchell was also able to reconstruct the original order of the leaves and quires. I’m not sure what this “re-agent” would have been, but judging from the present illegibilty of the palimpsest, I think this manuscript would be a good candidate for some form of investigative photography!

Unfortunately, Charles Mitchell was fatally wounded in action in France in 1917 during the First World War, while helping a doctor to bandage the wounded near the firing line. Volume 1 of his edition and translation had been published in 1912, and vol 2 was published posthumously in 1921.

We also have important Manichaean texts from Central Asia in Middle Persian, Sogdian, Turkish and Chinese. I’ll be writing about them on another occasion.

USW:  Many of us have been wondering about the miraculous "re-agent" applied under Dr. Barnett's auspices to St. Ephrem's Prose Refutations of Mani, Marcion, and Bardaisan in 1908. I asked Christina Duffy, Imaging Scientist at the British Library if she could say anything about the process and this is her reply. The good news is that the Library is planning to get new equipment later this year which may be able to read the undertext of the palimpsest and perhaps even improve on Mitchell's readings. We'll report on this in due course.

Sadly the result of chemicals used to make indecipherable script legible is seen in many of our manuscripts here at the BL. While the treatments initially enhanced the faded text greatly it was only a matter of time before the entire passage was left in a much worse state!

In 1969 Restaurator reprinted a report of the St Gallen Conference on the Conservation of Manuscripts from 1898 which listed gallic acid, thiocyanate, ammonium sulphide, sodium sulphide, potassium ferrocyanide and tannin solution as chemicals used to recover text. Essentially the reagents were attempting to balance the ink formulation. By "reagent" we mean a substance or compound used to bring about a chemical reaction.

There is mention of the use of chemical reinforcements as early as the 17th century but it wasn't until the 19th century when chemistry was more understood that lots of reactions were tried out. For iron-gall ink, a good stable black ink is formed by a black iron-gall ink complex. If the ink production for whatever reason is imperfect, ink can become illegible overtime i.e. fade. Imperfect ink is generally missing one of the essential compounds in the ink ingredient list (such as iron sulphide or gallic acid) so it makes sense that applying these missing chemicals will allow the reaction to take place and the text to become clear again! Which is what they did, but alas the aftermath was less pleasing!

The oldest known recipe for text recovery uses gallic acid. One article suggests making an extract of gall-nuts in white wine and wetting the missing text with a sponge to recover the text. However it isn't mentioned that the gall-nut extract goes brown itself after a few years and wherever the liquid was applied turns dark brown so nothing is legible!

Other treatments include hepar suplhuris, toning letters blue by reacting iron ions with potassium hexacyanoferrates or placing the text briefly in hydrochloric acid. Some manuscripts treated in this way are now covered in blue dye and completely illegible...which is why using imaging techniques is a much better idea!

There is a good article explaining all this including the chemical formulas by Robert Fuchs, “The history of chemical reinforcement of texts in manuscripts – What should we do now?” in Care and Conservation of Manuscripts 7 (2003): 159–170.

Posted by Ursula Sims-Williams at 1:07 AM

Thank you so much for this post. It is delightful to see a photo of Add. 12150 -- I was holding it in my hands a couple of weeks ago, looking at chapter divisions for an article that I am working on.

Is there any way that this treasure of a manuscript could be placed online? Why should the Greek manuscripts get all the limelight?!

It is also nice to see the material about the Prose Refutations. Years ago I scanned Mitchell's translation for the web, and noted his sad death. It is fascinating to see the manuscript, and the zoomed-in photo of the palimpsest text! And, although Manichaean material is not specifically my interest, the Chinese items looked interesting too!

I've blogged about this at my own blog:

Please do more on Syriac materials. There is considerable interest in them online, and of course the BL holds so many rare and special items for Syriac studies!

Thanks for your encouraging comments, and for putting a link on your blog. If there is a Syriac manuscript you would like to write about on our blog, do get in touch.
It would be wonderful to digitse this manuscript, if you have any suggestions for a funding application, again let us know.

Thank you also for the postscript; very interesting to hear how the reagents were done. Could we have more on this? What was the after-effect, and why?

Also what sort of machinery is the BL intending to get that will help?

I think there is a blog post on this, all by itself!