Malay manuscripts in the Sloane collection

Malay manuscripts have been present in the British Library from the very earliest days of the institution.  When the British Museum was founded in 1753, among the 71,000 natural history specimens, objects, manuscripts and printed books bequeathed to the nation by collector extraordinaire Sir Hans Sloane (1660-1753) were a number  from the Malay world.  These include three palm-leaf documents in Javanese (Sloane 1035, Sloane 1403.A and Sloane 1403.E), an Arabic treatise on Islamic jurisprudence with interlinear translation into Javanese (Sloane 2645), several of the earliest Malay printed vocabularies and translations of the Bible, and two manuscript volumes in Malay.  Together with all the other books and manuscripts in the library of the British Museum, these items were transferred to the newly-formed British Library in 1973. 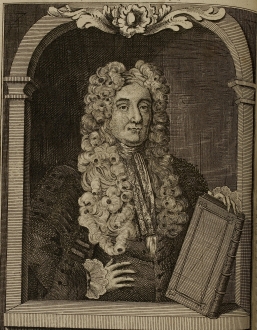 Portrait of Sir Hans Sloane holding a book, detail of an engraving from The Newcastle Magazine, 1785-6.  British Library, P.P. 6077.d.

The two Malay manuscripts from the Sloane collection are very different from each other, in both content and form.  One is a legal text or undang-undang,  Sloane 2393, probably dating from the 17th or early 18th century.  Its physical form is highly unusual in that the text is written lengthwise across the page, parallel to the spine of the book.  This suggests that the manuscript may have originated in a region where palm leaf – with its horizontal format – was still the standard writing medium.  A few characters in Javanese script on the cover (see below) point to an origin in Java, or perhaps from the environs of the strongly Javanese-influenced courts of Jambi and Palembang in east Sumatra.  The text has been studied in detail by the Malaysian scholar Mohammed Jajuli Rahman, who found that it differs from most other Malay texts on Islamic law (fiqh) of the 16th to 19th centuries by focussing on criminal law (hukum jenayah).  The text introduces itself on the first page as Inilah bab takzir, ‘This is the section on punishment’, and presents definitions of and punishments for murder, injury, adultery, slander, theft and banditry, concluding with a final section on legal procedure, for example in dealing with witnesses.

The term ‘Malay manuscript’ generally calls to mind a work from Southeast Asia produced in a Muslim milieu, written in Malay in the adapated form of the Arabic script known as Jawi, such as Sloane 2393 described above.  But as the technical definition of  ‘Malay manuscript’ essentially covers any item written by hand in the Malay language, it thus includes some very varied types of works, such as the second Malay manuscript owned by Sir Hans Sloane: a compilation of Christian hymns and the Psalms of David, as well as services for marriage and baptism, written in romanized Malay in a 17th-century Dutch hand (Sloane 3115).  On the flyleaf is inscribed the name Cornelius van der Sluijs, and a note in Dutch stating that in the year 1672 he sailed on the ship ‘The Coat of Arms of Alkmaar’ ('t Wapen van Alkmaar) to the East Indies, as a church representative to visit the sick. His arrival in Ambon on 10 July 1674 is recorded by François Valentijn in his monumental Oud en nieuw Oost-Indiën (1726, p.75), who described 'Cornelius van der Sluis' as a doctor from Utrecht.  The note in the manuscript further records that Van der Sluijs took his final church exams in 1678, and was then sent to Ternate as chief church minister.  This manuscript was therefore probably compiled in the Moluccas, in eastern Indonesia. 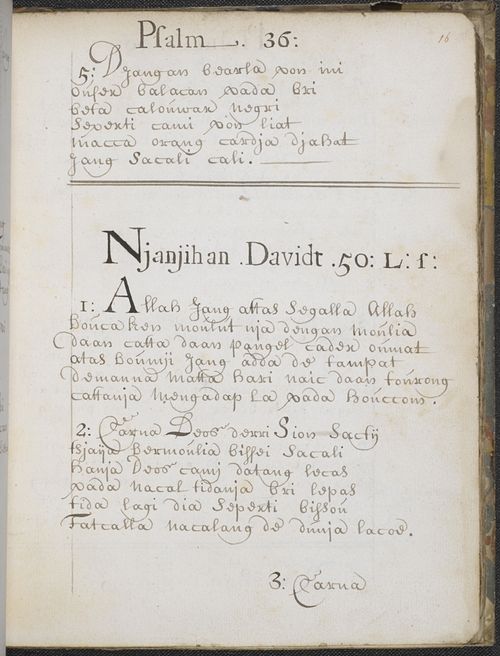