One of London’s most prominent celebrities in 1810 was Mirza Abu’l Hasan Khan, the ‘Envoy Extraordinary’ who was dispatched by Fath Ali Shah of Persia to the Court of King George III. He arrived in London in 1809, and the portrait shown here was commissioned by the East India Company soon after his arrival. 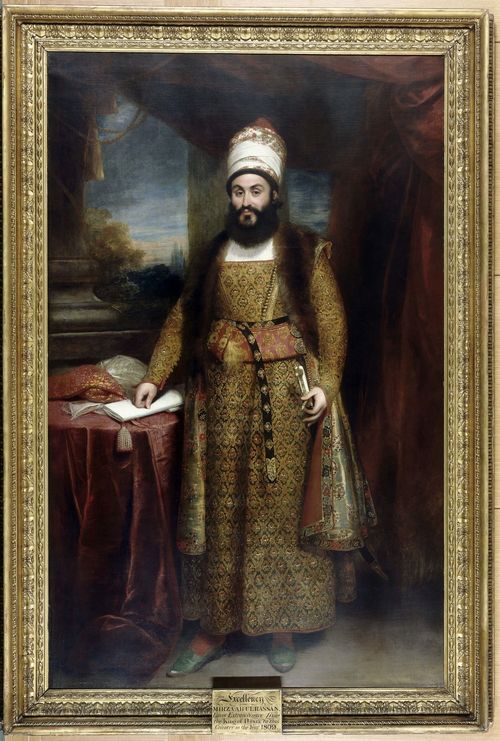 Portrait of Mirza Abu’l Hasan Khan, Envoy Extraordinary from the King of Persia to the Court of King George III, by William Beechey, 1809. British Library, F26.

For a catalogue record of this painting, click here.

On 2 January 1810, Charles Lamb wrote the following about Mirza Abu’l Hasan Khan, to his friend, Thomas Manning. ‘The Persian Ambassador is the principal thing talked of now.  I sent some people to see him worship the sun on Primrose Hill at half past six in the morning, 28th November; but he did not come, which makes me think the old fire-worshippers are a sect almost extinct in Persia.  The Persian Ambassador’s name is Shaw Ali Mirza.  The common people call him Shaw Nonsense’.

Perhaps the Persian envoy didn’t show up that morning because he was tired of being stared at all the time! He must have been a man of strong character, because he came to London a second time, in 1819. On that occasion, he presented a solid gold dish to the East India Company’s Court of Directors. Today, it is part the Victoria and Albert Museum’s collections.

Of course, there was a lot more to Mirza Abu'l Hasan Khan than his celebrity status. He had many high ranking friends and acquaintances in England, became a freemason, and in Persia, he worked closely with the British Ambassador to the court of Fath ʻAli Shah. The British Library holds a manuscript copy of his Persian diary (Add.23,546: Khayratnamah-yi sufara) in which he recorded his day-to-day activities in London. The portrait of Mirza Abu’l Hasan Khan (pictured above) is on permanent display in the Asia & African Studies Reading Room, so all our readers are welcome to come in and have a really good look at him.

Posted by Annabel Gallop at 4:59 PM

Very interesting but rather short piece. Leaves one wanting to read more! Typical British cleverness, may be :)

"Persian envoy did n’t show up that morning because he was tired of being stared at all the time!" The reason for that was not the envoy was tired of "being stared at". He did not worship the Sun! He was a Muslim not a Zoroastrian :)