Mildred Archer’s catalogue in 1972 of the Company drawings in the then India Office Library established a whole new area of research for scholars of Indian painting.  Her chapter on Delhi artists is especially valuable, since the works of artists she knew mostly only by name such as Khairallah, Ghulam Murtaza Khan, Ghulam ‘Ali Khan and Mazhar ‘Ali Khan have over the succeeding decades been discovered and published.  All of these artists have been influenced to some degree by European techniques and compositions.  Archer also wrote in 1972 (p.171):  ‘A few of the Delhi artists even painted on canvas in oils.  Jivan Ram was extremely versatile and could work in a number of styles and techniques.’  It proved possible during the last twenty years to flesh out Archer’s brief mention of Jivan Ram with the acquisition of some important works for the India Office Library’s Prints and Drawings collection (now British Library Visual Arts) and to expand the known range of his accomplishments.  This blog introduces a new acquisition by Jivan Ram and is a foretaste of a paper on the artist by the present author to appear in the electronic BLJ.

Jivan Ram is in fact well known from literary sources.  There is a long passage in William Sleeman’s Rambles and Recollections (London, 1844, vol. ii, pp.285-7) referring to the artist in 1834:  ‘Rajah Jewun Ram, an excellent portrait-painter, and a very honest and agreeable person, was lately employed to take the Emperor's portrait.’  Although the painting is not now known, a preliminary drawing survives, acquired by the India Office Library in 1971 just after the Archer catalogue had been sent to press.  This is a brush drawing in appearance much like a European portrait.  It appears from the truncation and the background shading to have been intended as the basis of a portrait miniature. 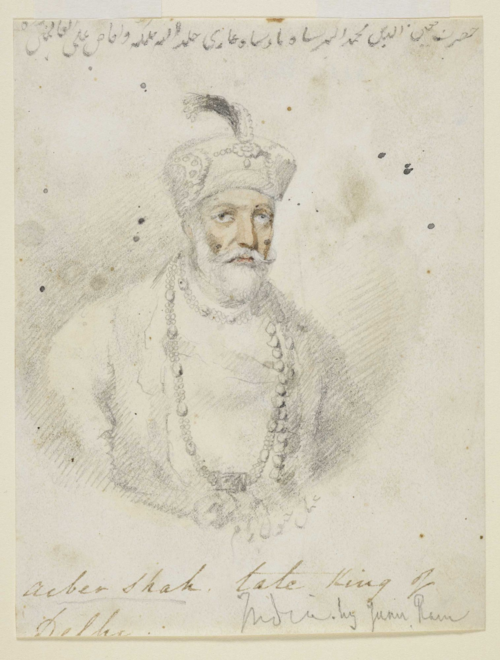 When an actual oil painting signed by Jivan Ram appeared in 1993, it was swiftly acquired.  This painting is a small three-quarter length portrait in oils on canvas of Captain Robert McMullin (1786-1865), of the East India Company’s Bengal Native Infantry, signed Jewan Ram on the front and dated 1827.  Jivan Ram had obviously seen and been inspired by some of George Chinnery’s portraits.  This was published in a small exhibition catalogue (J.P. Losty, Of Far Off Lands and People:  Paintings from India 1783-1881, Indar Pasricha Fine Art exhibition catalogue, London, 1993).

Two years later in 1995 another small half-length portrait in oils appeared of another army officer, Captain William Garden (1790-1852), again signed and dated 1827 and this time inscribed on the back as having been executed at Delhi.  Here the manner is more akin to that of Robert Home. 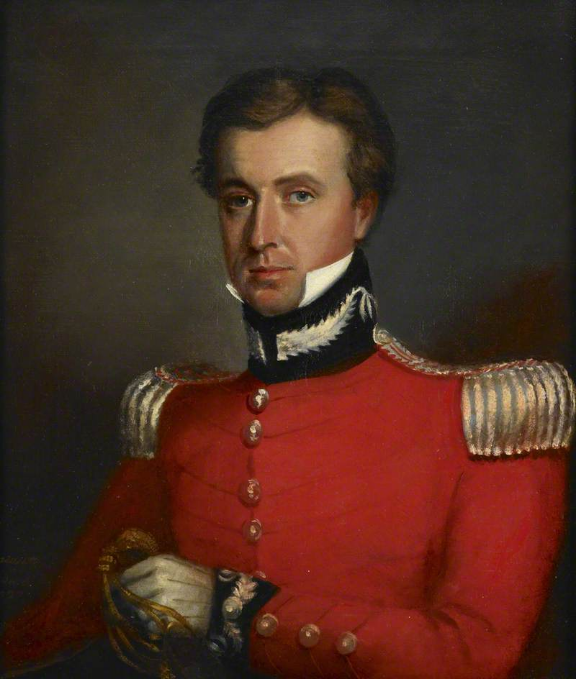 Garden was attached to the suite of Lord Combermere (Commander-in-Chief 1825-30), when the British successfully intervened in Bharatpur in 1825-26 to restore the infant Maharaja Balwant Singh to the throne.  Garden was then attached to the suite of Lord Amherst (Governor-General 1823-28) in his tour of the Upper Provinces in 1826-7.  Amherst visited Akbar II in Delhi in 1827 and it must have been then that Jivan Ram painted Garden’s portrait also.

At this period Jivan Ram was based in Delhi and then around 1827 seems to have moved to Meerut where Sleeman says he was based.  His principal clientele was army officers especially after the successful conclusion to the Bharatpur war.  He had no competition from British artists in upper India at this time.  A few years later in the 1830s we find him working for the famous Begum Samru of Sardhana (1745-1836), whose palace was decorated with some twenty of his oil paintings.  In 1893 they were sold;  some were bought for Government House, Allahabad, while others wound up in the Indian Institute, subsequently in the Bodleian Library, in Oxford.  They are all described in Sir Evan Cotton’s The Sardhana Paintings at Government House, Allahabad (Allahabad, 1934), while the Bodleian’s paintings along with the Library’s and others by or attributed to Jivan Ram in public collections in the UK may be seen at http://www.bbc.co.uk/arts/yourpaintings/paintings/search/painted_by/jayun-ram.

In addition to his oil paintings, Jivan Ram was also a painter of miniature portraits on board and ivory.  In another literary reference to Jivan Ram, Emily Eden’s refers to the artist in glowing terms (Up the Country, London, 1866, vol. i, pp.33-4).  She was staying in 1838 at Meerut with her brother George Lord Auckland (Governor-General 1836-42), and her sister Fanny:  ‘I treated myself to such a beautiful miniature of W[illiam] O[sborne, her nephew]. There is a native here, Juan Ram, who draws beautifully sometimes, and sometimes utterly fails, but his picture of William is quite perfect. Nobody can suggest an alteration, and as a work of art it is a very pretty possession. It was so admired that F[anny, her sister] got a sketch of G[eorge] on cardboard, which is also an excellent likeness.’.

So miniature portraits by Jivan Ram on ivory might be expected to surface, but it was not until 2006 that the Library was able to acquire a signed and dated example.  Subsequently another two were acquired:  all three of them are dated 1824 (Add.Or.5605, 5636, 5637).  Another more ambitious miniature signed and dated 1826 appeared at Bonham’s, London, in November 2013 and this has now been acquired by the Library.  This is a standing three-quarter length portrait of Lieutenant Gervase Pennington (1795-1835), dressed in the uniform of the 3rd Bengal Horse Artillery. 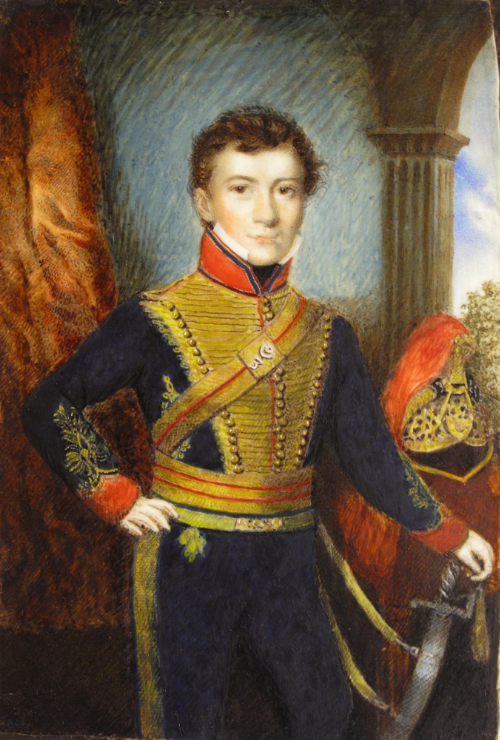 This is set in an interior with a view to a landscape outside through arched embrasures.  Pennington adopts a military swagger pose with one hand on his hip, the other on his sword, while his crested helmet is beside him.  Pennington was Adjutant to the 3rd Brigade Bengal Horse Artillery from 1825 to 1832 and along with his regiment was involved in the Siege of Bharatpur in 1825-26, which would have brought him into Jivan Ram’s ambit.

The Library’s paintings and miniatures by Jivan Ram are limited to those of the 1820s, while the Bodleian’s portraits carry the story forward to 1835.  No miniature has yet appeared from his work in the late 1830s corresponding to Emily Eden’s enthusiastic description.  Jivan Ram boldly essayed the techniques and style of European portraits and set himself up as a portrait painter without a patron.  He is not of course among the greatest of Indian artists, even in the nineteenth century.  Yet they are undeniably charming examples of the art of portraiture. Not until more signed and dated work appears will it be possible to provide a definitive account of one of the most interesting Indian artists of the nineteenth century.

Another thorough and more informative essay by Jerry Losty. Why has there not been a show devoted to Jivan Ram and/or Begum Samru? The Begum is one of the most interesting actors in early 19th century India. Even if an exhibit of the Begum just focused on her European mercenaries and her own Catholic interests, there is so much to tell. Then there is the political impact of her rule at Sardhana.