Among the treasures recently digitised thanks to the generous support of the Iran Heritage Foundation is a fine illustrated copy (BL Add. 7735) of Farīd al-Dīn ‘Aṭṭār’s famous poem Manṭiq al-ṭayr (‘Speech of the Birds’), a Sufi allegory of the quest for God. The first posting in this series introduced the poem and discussed some textual and artistic features of the manuscript. The second examined three illustrations while, this, the third in the series, examines three more miniatures and the accompanying text, in relation to ‘Aṭṭār’s poem and some of its principal themes. 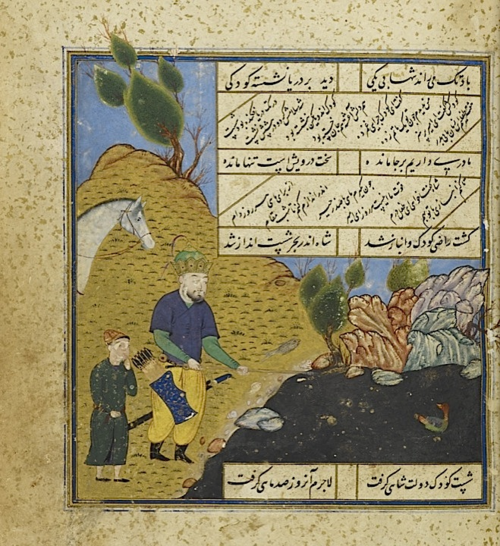 The skilful and atmospheric painting on folio 68r (ed. Gawharīn, p. 93) illustrates one of the more charming stories in the Manṭiq al-ṭayr, in which Sultan Mas‘ūd of Ghazna, son of the redoubtable Maḥmūd, is depicted helping a poor orphan to catch fish. The miniature, too, is attractive although it is slightly discoloured and the setting is less ambitious than that of most Bihzād school paintings (see my earlier post). In both the catalogue description by Norah Titley (Miniatures, p. 35) and the brief mention of the episode by Helmut Ritter in his vast study of ‘Aṭṭār, the royal protagonist is misidentified as Maḥmūd rather than Mas‘ūd.

The sad-faced boy needs fish to feed himself and his six siblings. Mas‘ūd, whose name means ‘fortunate’, catches a hundred fish for him but declines the half share of the catch which the boy offers him. Next day the Sultan sends for the boy, having found him to be a sincere friend, who unlike some of his courtiers asks nothing of his king – and shares his throne with him.

While galloping his grey horse as fast as the wind,
he espied a child sitting by a river,
with a net cast into the flowing stream.
The King greeted and sat down next to him.
The youngster sat there despondently;
he was sore of heart and weary of soul.
Said [the King], ‘Why are you so sorrowful?
I never saw anyone as mournful as you!’
The youngster replied: ‘O most virtuous Prince,
we are seven children, now fatherless.
We have a mother, who’s unable to move;
she is so very poor, and all alone.
Every day I cast out a net for fish;
until nightfall I stay here at my post.
If I catch one fish, with a hundred pains,
that’s our food until the next night, great Prince.’
Said the King, ‘O dejected child, would you like
me to join in and be partners with you?’
The youngster was happy to be his partner;
the king began casting the net in the stream. 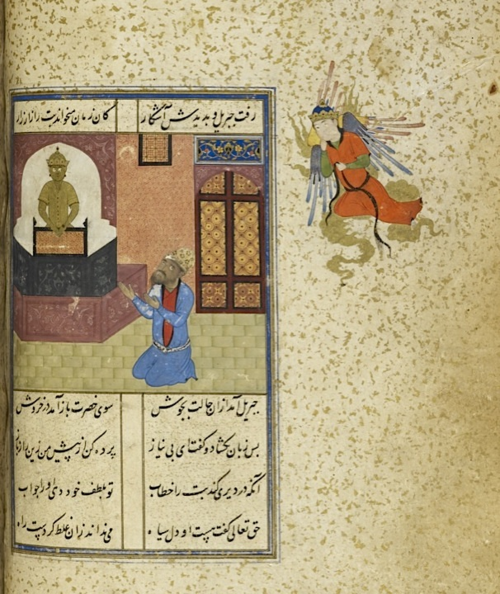 The mysteriousness of Providence features once again in the passage in ‘Aṭṭār’s poem to which folio 75v relates (ed. Gawharīn, pp. 102-3). One night the Angel Gabriel (Jibril) hears from on high the cries of a worshipper whom he takes to be a person of great purity of soul. Unable to locate that individual, the Angel seeks directions from God, Who directs him to a temple in Rūm, or Asia Minor. There Gabriel finds a man from whom the imprecations are emanating, and he is kneeling before a golden idol. Deeply puzzled that such a pure-sounding prayer should come from an idolater, Gabriel implores God for an explanation. The response is that the man is the victim of his own ignorance, that he is to be pardoned, and that by Divine Providence this idolater will be guided to true faith.

Jibrīl went, and espied him, plain to see,
imploring that idol most plaintively.
Jibrīl, perturbed at such goings-on,
returned to [God’s] Presence, scandalized;
then, opening his mouth, he said: ‘You Who need naught,
unveil this mystery for my sake.
A man in a temple – addressing an idol!
Do You respond to him with kindness?’
God Most High said: ‘He has a blackened heart.
Knowing not, he has erred in the path he’s taken.’ 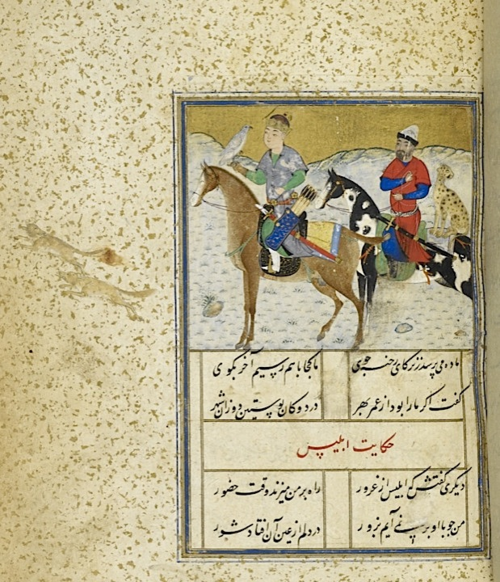 In the previous illustration the Archangel flies, or hovers, in the margin of the page. Likewise, this painting on folio 84r (ed. Gawharīn, p. 112), which like many Persian miniatures ‘reads’ from right to left, makes imaginative use of the space beyond the text frame. The subsidiary characters are at the centre, while the main ones leap into the margin and almost, as it were, off the page. The artist has brought the text to life with charm and inventiveness.

By contrast, however, this vignette from Manṭiq al-ṭayr exemplifies ‘Aṭṭār’s sometimes grim sense of humour. Narrated in just four couplets, it is a tale of two foxes whose happy life together comes to an abrupt end when a king (thus in ‘Aṭṭār’s text – but the artist has painted a young, beardless prince, accompanied by an older huntsman) appears on the scene, hunting with a falcon and cheetah. The second couplet of the four in this passage, which mentions the royal hunter’s arrival, is mysteriously missing from the text in our manuscript. A number of other omissions from Add. 7735 were mentioned in the first posting in this series.

Two foxes met and became companions;
then a couple, living a fine life together.
[A king came to their land with a falcon and cheetah,
parting those two foxes from one another.]
The vixen asked the dog, ‘O bolt-hole seeker,
do tell me, please: where shall we meet again?’
Said he, ‘Even if we survive for a while,
it will be in town – in the furriers’ shop!’

ʻAṭṭār’s contemporaries in northeastern Iran had experienced extreme and bloody upheavals even before the horror of the Mongol invasion in the early 7th/13th century. They would probably not have been surprised at the fact that the theme of the nearness of death looms large in his poetry – any more than we are surprised that the same is true of many of those who seven centuries later found themselves fighting in a Great War, a ‘War to end all Wars.’

Follow this link to see the whole manuscript on the British Library's digitised manuscripts site, and keep in touch with further developments at @BLAsia_Africa.