When an angel meets a demon: Advice on love and relationships in a Thai divination manual

A new year – a new beginning. An easy (re)solution, one might think. But it may turn out later that things like love and relationships should not be taken too lightly, and it is always worth thinking twice. Or, at least, seeking advice. People in 19th century Siam would certainly have done so before getting serious in a relationship. They would have consulted a divination specialist (mor doo) who would have had the knowledge to interpret the texts and illustrations of divination manuals (phrommachat) that had been handed down from generation to generation. Such manuals were part of the paraphernalia of divination masters who specialised in fortune telling, matching the horoscopes of prospective couples, and giving advice on love and marriage. 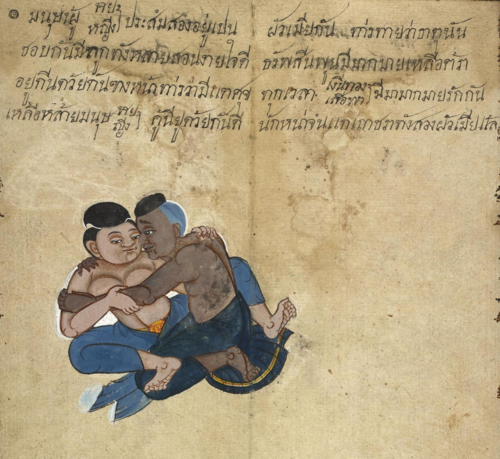 Divination manuals were found in Thailand not only in Thai language but also in Mon and Shan languages, but usually the illustrations in these manuscripts are in central Thai style. Some beautifully illuminated examples of such manuals are held in the Thai, Lao and Cambodian collections of the British Library.

One outstanding phrommachat manuscript was acquired for the Library by Henry Ginsburg in 1975 (Or. 4830) and has been digitised recently. Although the manuscript has no colophon and is not dated, we know from the style of writing and orthography that it was produced during the second half of the 19th century. However, it may be a revised copy of an older manuscript that was in a deteriorating state due to frequent use.  The manuscript has 59 folios of text written on mulberry bark paper, accompanied by coloured illustrations on 32 folios and one ink drawing of entwined naga serpents. The text mainly explains how to interpret the illustrations, which include drawings based on the Chinese zodiac that relates each lunar month to the animals of the 12-year-cycle and their reputed attributes (earth, wood, fire, iron, water) as well as a male or female avatar (representing yin and yang), and a symbolic plant. A small number diagram used to work out periods in a person’s life which are particularly dangerous or unlucky is also usually present. 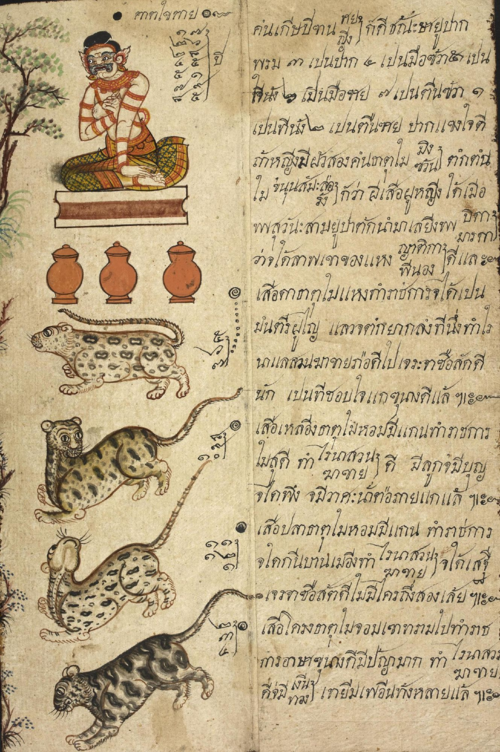 British Library, Or.4830, folio 6, showing the horoscope page for people born in the year of the tiger.

Each zodiac-related folio is followed by one folio of paintings, which symbolise the fate of a person under certain circumstances. The paintings are accompanied by numbers and one would have to trust the interpreting skills of the divination specialist to find out about the future. 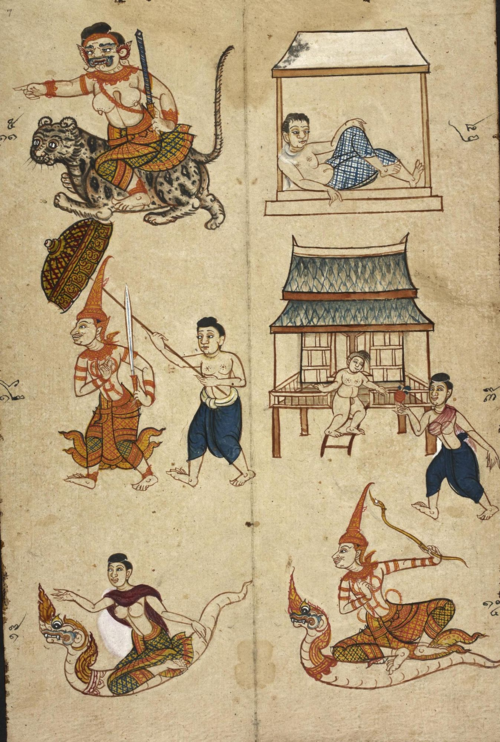 British Library, Or.4830, folio 7, containing illustrations that represent possible fates of a person born in the year of the tiger.

Most interestingly, the manuscript includes descriptions of lucky and unlucky constellations of couples. At first sight, these portrayals may appear like some wild imaginations of love and lust as they involve not only humans, but also angels (devata) and demons (phi suea). However, the figures - which are shown locked in amorous embrace - in fact represent different human characters, and the purpose is to take people’s characters in consideration in addition to the horoscopes. 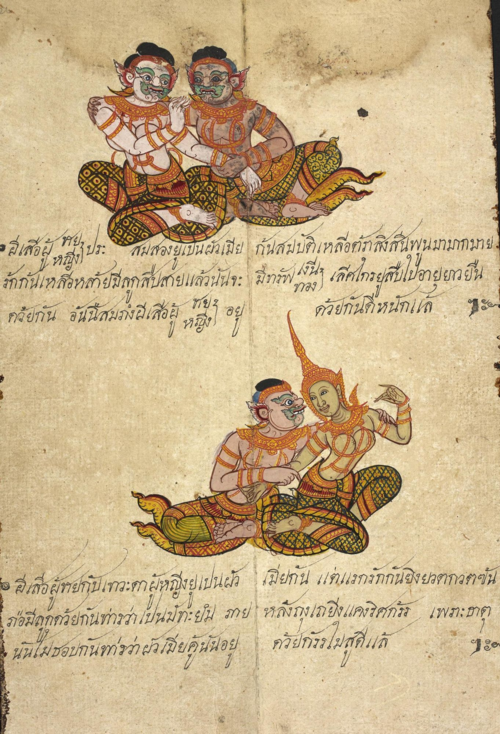 According to these interpretations, a couple of rough, noisy or hot tempered (demonic) characters have a good chance of living happily together through all ups and downs and growing old together, whereas the relationship between a demonic male character and an angelic female will not go well, although they can marry and have children together. 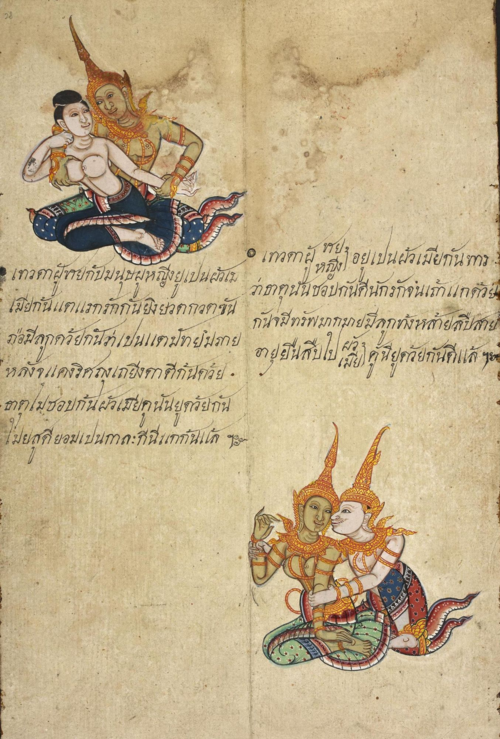 British Library, Or.4830, folio 28, illustrating the possible fate of marriages of angels with humans and between angels themselves.

The relationship between average humans and angelic characters may begin with passionate love, but it will not last long. They may end up fighting and having a lot of trouble. The best possible constellations for marriage are between two average humans, and between two angelic characters. These couples are said to grow old together happily with many children and without any worries.

The miniature paintings in this manuscript are of outstanding beauty and quality. The unnamed artist paid great attention to every single detail of the figures - facial expression, hand gestures and body language, and the elaborate designs of their clothes and jewellery. It is a fine example of 19th century Thai art and wisdom.  The entire manuscript can be viewed online on the British Library’s Digital Manuscripts Viewer.