Meditation is an essential part of Buddhism. It aims to develop mental discipline and to cultivate a wholesome, alert state of mind which eventually results in the practice of Dhamma. Meditation, often combined with chanting methods, helps to reach a mental state of happiness (piti) which is one of the Seven Factors of Enlightenment (satta bojjhanga), which are: mindfulness, investigation, effort, happiness, tranquility, concentration, and equanimity.

Happiness in the Buddhist sense, however, should not be misinterpreted as a state of individual happiness or temporary contentment. It cannot be self-centered or selfish but is rather a state of mind that has overcome all desire (tanha) –the principal cause of suffering (dukkha). Dukkha is often described as suffering or pain, but it also refers to impermanence and change, as well as to conditioned states of mind, i.e. being dependent on or affected by something/someone. Meditation is a powerful tool which can overcome such states of mind by focusing in different ways on the body, on emotion, and on the conscious or unconscious mind. Common methods of contemplation can be by breath and body movements, by means of a meditational device (a candle flame, metal object, beads or a mandala drawing), and also through sounds and smells (senses and emotions). 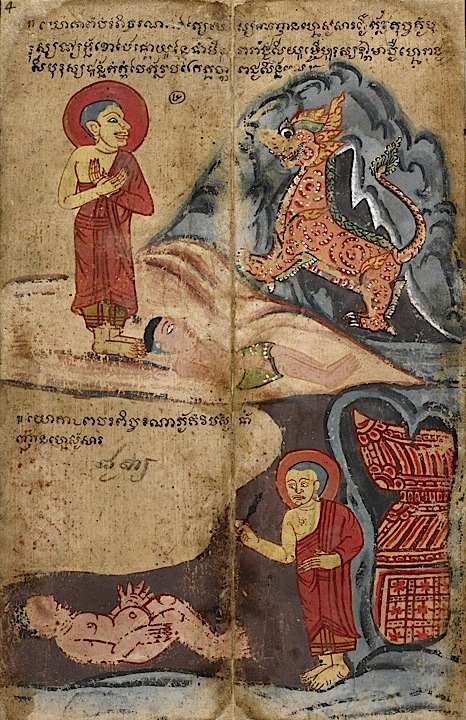 Fragment of a manual of a Buddhist mystic (yogacavara) on meditation practices, including morbid meditations. Or.14447, f 4

Although it is no longer widely practiced, morbid meditation is possibly the most efficient of all meditation practices aiming to overcome conditioned states of the mind and emotion. It is described in the Buddha’s discourse on the practice of mindfulness (Maha Satipatthana Sutta), one of the earliest Buddhist teachings. According to Buddhaghosa, a fifth-century Buddhist scholar who compiled numerous commentaries on the Buddha’s teachings, morbid meditation is explained as follows:

As though he were to see a corpse thrown aside in a charnel ground – one, two, three days dead, bloated, livid, and oozing matter… being devoured by crows, hawks, vultures, jackals, or worms… a skeleton with flesh and blood, held together with sinews… disconnected bones scattered in all directions bones bleached white, the colour of shells… bones, heaped up, more than a year old… bones rotten and crumbling to dust – a monk compares his own body, ‘this body too is of the same nature, it will end up like that, it is not exempt from that fate.’ In this way, he abides contemplating the body as body… and he abides independent, not clinging to anything in the world. (Skilling, p. 30) 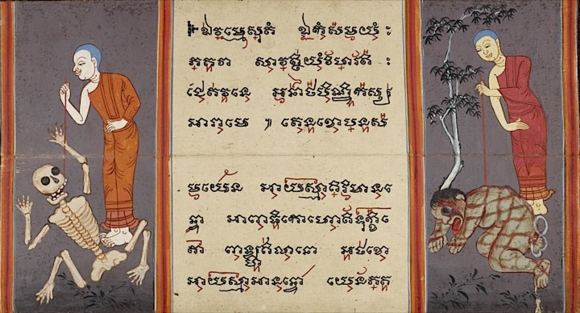 The highest state of meditation is reached when both attraction and repulsion cease to exist: ‘In the arahant, there is neither liking nor disliking: he regards all things with perfect equanimity, as did Thera Maha Moggallana when he accepted a handful of rice from a leper.’ (Francis Story).

Morbid meditations are very well documented in Thai manuscript painting. Many manuscripts about the famous monk Phra Malai (see my post ‘A Thai book of merit: Phra Malai’s journeys to heaven and hell’) include one or more scenes of morbid meditations. These manuscripts were often commissioned by families of deceased persons as funeral presentation volumes. The Thai, Lao and Cambodian Collections of the British Library hold over 20 such manuscripts, all of them beautifully illustrated with scenes from the monk’s encounters and his teachings to the lay people.

Illustrations of the monk Phra Malai meditating over corpses. On the left side, he touches the burial cloth of the deceased which is believed to be a method to transfer merit to the dead. Or.14838, fol. 7

In most cases, the meditation scenes in these manuscript paintings depict one monk (in the context of the legend of Phra Malai this would be the monk Phra Malai himself) sitting or standing in meditation near one or more decaying corpses. The monk is usually shown with one or more of his paraphernalia such as a fan, an alms bowl, an umbrella or a walking stick. The walking stick fulfils various purposes: to scare away small animals when the monk is walking, or to provide support during seating or standing meditation, but sometimes the monk can be seen touching a corpse with his walking stick in order to transfer merit to the deceased while meditating. 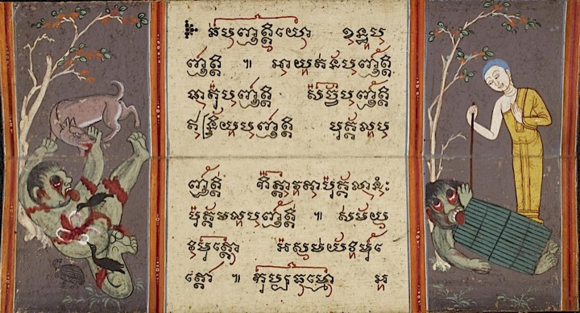 Illustrations showing two corpses, one being eaten by animals and the other wrapped in a sheet made from bamboo sticks, with the monk Phra Malai touching the wrapped body with his walking stick. Or.13703, f 9

The bodies of the dead are usually shown bloated and in a greyish colour, often with wounds discharging blood and pus, wide eyes, and in an obvious state of decay. Sometimes animals can be seen feeding on the corpses. 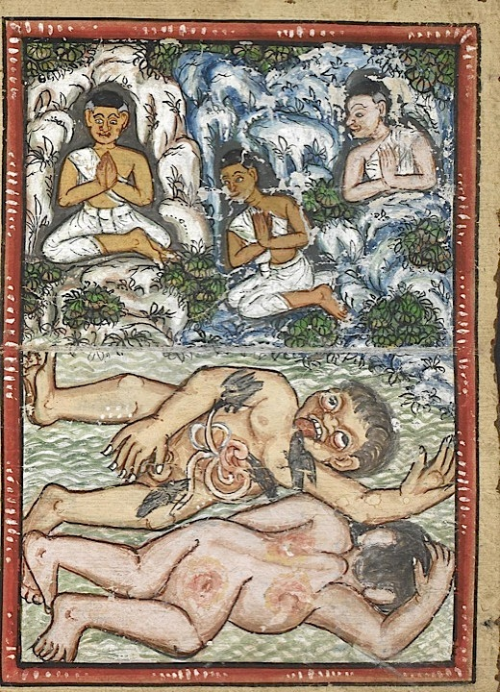 It is not only monks who are shown practising morbid meditation in Thai manuscript paintings. The story of Phra Malai includes a scene where the monk teaches lay people what he has heard from Metteya, the future Buddha, about what will happen to mankind. While violent humans kill each other, those who follow the Dhamma – lay people and monks alike - will hide in caves meditating, and in some cases meditating over corpses until the fighting is over.

Posted by Ursula Sims-Williams at 11:27 AM