An Illuminated Qur’an manuscript from Aceh

The British Library has recently acquired a finely illuminated Qur’an manuscript from Aceh (Or. 16915).  The manuscript, which had been held for some time in a private collection in Germany, has just been fully digitised and can be read here.  Like most Qur’an manuscripts from the Malay world, it has no colophon or information on the scribe or place of production; the attribution to Aceh is based on codicological features such as handwriting, illumination and binding. Although undated the manuscript is written on English paper watermarked ‘J Whatman 1819’, suggesting that it might have been copied some time in the 1820s.

Situated on the northen tip of the island of Sumatra in present-day Indonesia, Aceh was the most powerful Islamic kingdom in Southeast Asia in the 17th century.  A renowned centre of Islamic learning, Aceh was also an important port of embarkation to the Middle East for pilgrims from all over the Malay world, earning it the epithet Serambi Mekah, ‘Mecca’s Verandah’. From the 18th century onwards, large numbers of illuminated Qur’ans and other Islamic manuscripts were produced in Aceh, and are today mainly held in libraries and museums in Indonesia (predominantly in Aceh itself), Malaysia and the Netherlands.

Opening pages of the Qur’an, with Surat al-Fatihah on the right-hand page and the beginning of Surat al-Baqarah on the left. British Library, Or. 16915, ff. 2v-3r.

The Acehnese style of illumination is highly distinctive in terms of the architecture of the decorated frames laid symmetrically across two facing pages. The vertical borders framing the text block are always extended upwards and downwards.  On the three outer sides of the decorative border are arches, that on the vertical side always being flanked by a pair of foliate ‘wings’.  The palette is centred on red, yellow and black, with the occasional addition of green or blue, but the most important ‘colour’, which always carries the main motifs, is ‘reserved white’ – not a pigment at all, but the background colour of the paper which shows through the design.

The Qur’an now in the British Library has a full complement of three double decorated frames, at the beginning, end and middle of the Holy Book.  Each pair of frames is different, and yet all conform to the general prescriptions of the Acehnese style outlined above.  The placement of the illuminated frames in the middle of a Southeast Asian Qur’an manuscript is an important indicator of its regional origin: in Qur’ans from the east coast of the Malay peninsula it is the beginning of Surat al-Isra’ that is highlighted; manuscripts from Java and Sulawesi mark the beginning of Surat al-Kahf; while in Aceh it is always the exact midpoint of the text, the beginning of the 16th juz’, Surat al-Kahf v. 75, which is illuminated.

In addition to the illuminated double frames, Or. 16915 has an extensive set of marginal ornaments, which mark the divisions of the Qur’an into thirty equal parts or juz’ (plural: ajza), enabling the daily recitation of the complete Qur’an in one month.  Each juz’ is highlighted in manifold ways: the exact starting point in the text is marked with a composite roundel; the first line is written in red ink and set in red frames; and an elaborate ornament is placed in the centre of the vertical margin.  There are 28 such marginal juz’ markers in this manuscript (juz’ 1 and 16 begin with illuminated frames) and each is subtly different. 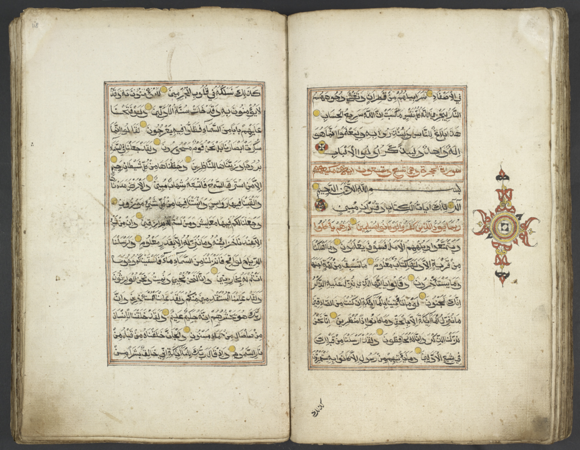 In addition to the juz’ markers, portions of each juz’ (half, quarter and eighth) are also marked with smaller marginal ornaments, and here, too – as is generally the case in Southeast Asian Qur’ans – each is unique, reflecting the artist’s skill for endless improvisation on a single theme, in this case a base unit of concentric circles. 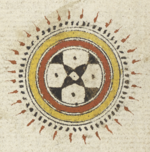 Traditionally, Qur’an manuscripts did not have page or verse numbers, and so graphic devices indicating divisions into juz’ and smaller units thereof played an important role in helping readers to find their place in the Book. A notable feature of this manuscript, which emphasizes the importance of division into thirty parts, is a poetical composition on the first page which appears to be a mnemonic made up of the first words of each juz’ (as identified by my colleague Muhammad Isa Waley). 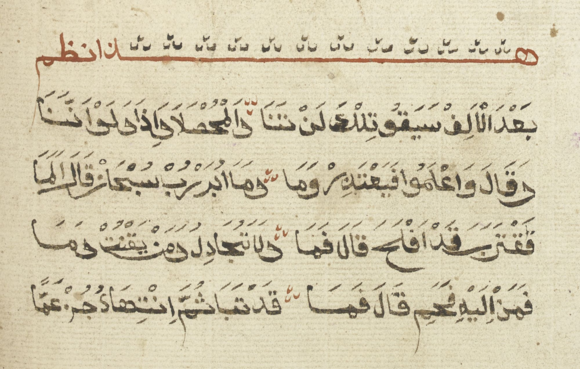 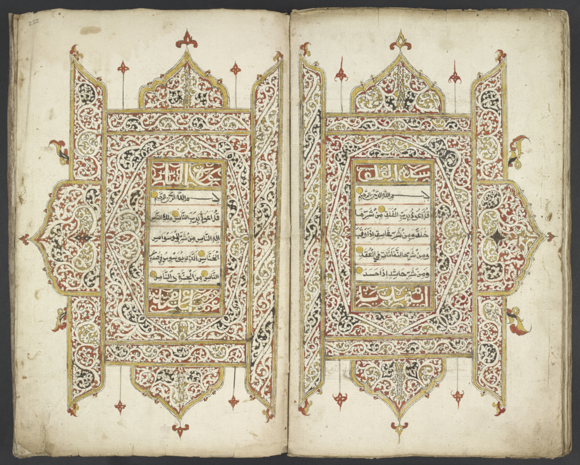 Final decorated frames at the end of the Qur’an, enclosing Surat al-Falaq on the right-hand page, and Surat al-Nas on the left. British Library, Or. 16915, ff. 254v-255r.

Also of great interest are the outer covers of the manuscript.  Or. 16915 has an original cloth binding of coarse brown cotton, with an appliquéd repeating paper pattern.  This use of overlaid cut-out paper patterns on cloth manuscript bindings has so far only been noted in Qur’an manuscripts from Aceh, and can also be seen on another, less finely illuminated, Acehnese Qur’an in the British Library (Or. 16034) shown below.  But what is exceptional about Or.16915 is the calligraphic panel across the top, repeating the shahada, the Muslim profession of faith (La ilaha illa Allah, ‘There is no god but God’) on the front cover, and the word Allah on the back cover.  Finally, the whole book is enclosed within a loose full leather binding in the Islamic style, with an ‘envelope flap’ and stamped ornamental medallions and ruled frames. Front cover of the manuscript of brown cloth with a cut-out paper pattern inscribed with the shahada. British Library, Or. 16915, front cover. 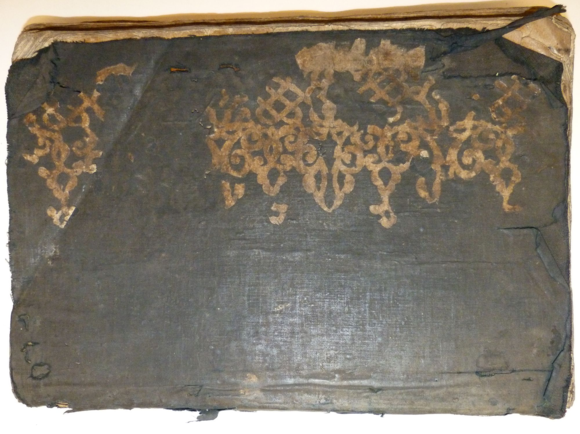 Back cover of another Qur'an manuscript from Aceh (which has not yet been digitised), also with a cut-out paper pattern. British Library, Or. 16034. 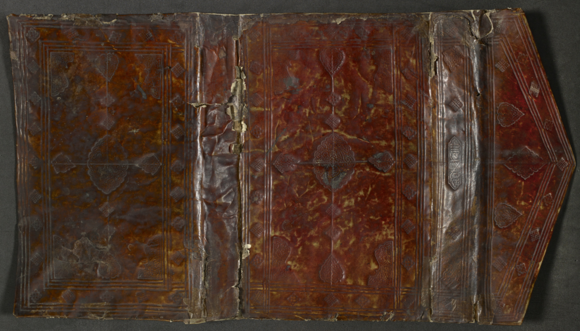