The function of seals as symbols of textual authority and ownership is deeply rooted in the Islamic world, especially in Arabic and Persian-speaking societies. Historically, seals were used for authorising various documents, including letters and legal contracts, and for marking the ownership of books and manuscripts. Edward William Lane attests to this in his record of 19th century Egyptian society: ‘Almost every person who can afford it has a seal-ring, even though he be a servant’ (Lane, p. 49).

It is interesting to learn that Arabic-script seals were also used by British colonial officers. This was a long-established practice in India where officials of the East India Company were theoretically acting as ‘servants’ of the Mughal emperor (Gallop and Porter, pp. 66-7). This custom set a lasting precedent and we find British colonial officers using Islamic-style seals well into the 19th and 20th centuries.

How might we understand the use of seals by non-Muslim Europeans in the context of Empire? A few examples from the Middle East and Persian Gulf are given here from the British Library’s manuscripts and the India Office Records.

Britain maintained its imperial hegemony over the Persian Gulf from its administrative headquarters, or Residency, at Bushire on the southern coast of modern-day Iran. In the latter half of the 19th century, both the Political Resident in the Persian Gulf and his deputy possessed seals with their positions rendered into Persian. Both seal impressions are rectangular and measure 22 x 20mm with inscriptions in a clear nasta‘liq script.

Another example is the seal of Edward Charles Ross who served as Political Resident in the Persian Gulf from 1872 to 1891 and was an avid collector of antiquities (his collections in the British Museum can be seen here). His seal is the same size, style and rectangular shape as that of the Resident’s seal, but also includes his name. 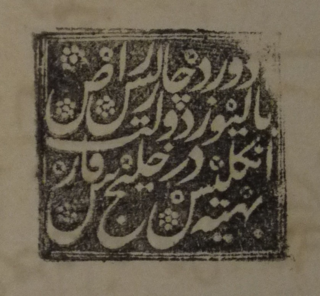 Not all seals were rectangular. Some appear as circles or ovals. One such example is that of Captain Robert Taylor who served as the British Resident in Baghdad and Basra from 1828 to 1843. As well as being a British colonial officer, Taylor amassed an extensive collection of Oriental manuscripts. Many of these were acquired by the British Museum and are now housed in the British Library (Add Ms. 23252-23606).  His seal appears in many of these manuscripts attesting to his ownership. It is a circle with a diameter of 18mm. It contains his name in naskh script with a tughra-like flourish: ‘abduhu Taylur, ‘his servant, Taylor’ (Cook, n. 20, p. 81). Again, Lane notes in respect of this usage (Lane, p. 48): ‘The name is accompanied by the words ‘his servant… signifying the servant, or worshipper of God’. According to Arabic codicology expert Adam Gacek, prefacing a name with ‘abduhu, ‘his servant’, that is the servant of Allāh, is a frequent feature of Arabic seals and expresses the possessor’s humility in relation to God (Gacek, p. 90). 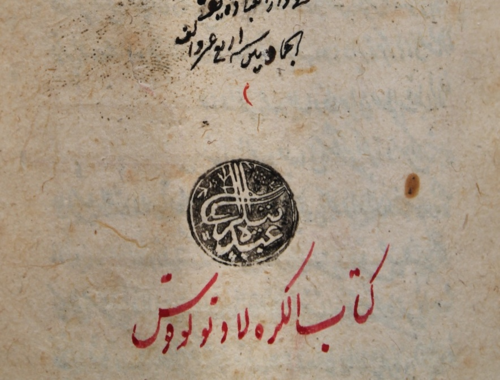 Another example is the seal of John Calcott Gaskin who served as the assistant to the Political Resident at Bushire at the end of the 19th century, and later as the first Political Agent at Bahrain from 1900 to 1903. In comparison with the other seals presented here, his is oval and very small, measuring 19 x 9mm. The inscription consists of his name in nasta‘liq script and is decorated with a vine and floral motif. 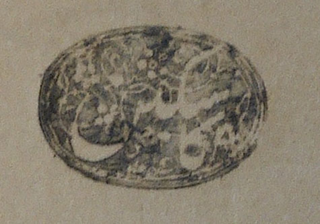 Outside the India Office, we find other Europeans employed in the Gulf using Arabic seals. One such example is Charles Dalrymple Belgrave who was employed as Adviser to the Bahrain Government from 1926 until 1957. His oval-shaped seal (below) is the same size as those of the ruling Al Khalifah family with his name, C D Belgrave [balkrayf sī dī] rendered into naskh script. There is also a decorative tughra design that does not appear to form part of the inscription.

As documented in his diary, we find that Belgrave was well aware of the authority that seals carried. In an entry dated 30 May 1930, the elderly blind leader and legal authority of the Sunni community (qāḍī) of Bahrain had more or less insinuated to Belgrave that ‘his favourite wife had stolen [his seal] from him’ and had given it to another man to seal papers. Belgrave has a devastating realisation and notes: ‘If we admit the invalidity of his signature, all documents since he became blind are liable to be queried’.

Another incident a year later involved Belgrave’s own seal. In a diary entry dated 29 May 1932, he writes that a certain ‘Ali bin Husayn had recovered the seal out of his ring which had fallen out during an affray. He reflects: ‘I am lucky to have got it back as it is the one I seal all official papers with and it would be awkward if I lost it’.

The examples given demonstrate that the practice of British colonial officers using Arabic and Persian seals continued from the time of the Mughals well into the 20th century. As we have seen, seals could signify ownership, authorship and station, and British officials, such as Belgrave, understood their use and potential abuse. We can, therefore, understand the use of seals as a way of aesthetically and textually performing Empire, or as ‘Ornamentalism’, to borrow a term coined by David Cannadine. This was done by means of the cultural appropriation of a recognisable ‘Islamic’ symbol to make hierarchy, authority, legitimacy and power ‘visible, immanent and actual’ (Cannadine, p. 122).

[1] The term bālyūz was used to refer to the Resident in both Arabic and Persian. Borrowed from Ottoman Turkish, it was derived from the Venetian Italian balio (ambassador), itself derived from the Latin bajulus (porter, carrier; administrator). The word has similar a origin to the word ‘bailiff’, which made its way into English through French.