An Album of Maratha and Deccani Paintings - part 1

An Indian album in Asian and African Collections of which hitherto little notice has been taken is a large but slim volume, numbered Add.21475 (Blumhardt 1899, no. 91).  The album contains eight paintings mostly from the Deccan, including five large paintings illustrating verses from Keshav Das’s classic text on poetics, the Rasikapriya.  It has to my knowledge been exhibited only once, in 1976, and only one of its paintings has ever been published, a portrait of Raja Sambhaji (Losty 1986, no. 56).  An inscription records that it was presented to the British Museum in 1856 by F.S. Haden Esq.  This is possibly Sir Francis Seymour Haden (1818-1910), an eminent surgeon and one of the great 19th century authorities on etching, both on its practice and on the works of eminent etchers.  The album was rebound in Europe and the paintings remounted on European paper so that any connection with its compiler in India has been lost. 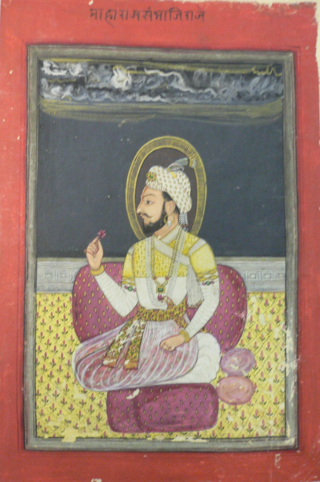 Sambhaji (1657-89) was the eldest son of Sivaji, leader of the Hindu Deccani resistance to Aurangzeb’s assault on the kingdoms of the Deccan.  After Sivaji’s death in 1680, Sambhaji led his forces against not only the Mughals but the Siddis of Janjira, the Portuguese in Goa and the Wodeyars of Mysore.  He was captured in a minor skirmish with the Mughals at Sangameshwar in 1689 and executed at Aurangzeb’s command.  This rare portrait cannot be much removed in time from Sambhaji’s life.  The conventions of the portraiture, being seated on a terrace holding a flower, are standard throughout the 17th and 18th centuries, but the tangled clouds at the top point particularly to an early date.  Its dark flat colours suggest a provenance far from the glitter of Hyderabad, the centre of Deccani painting at the time, and perhaps to a Maratha provenance, about whose artistic activities at this period little is known.  Portraits of Sambhaji are very rare, but two formerly in the royal Satara collection are now in the History Museum of Marathwada University, Aurangabad (Deshmukh 1992, pls. I. IIIA).  The former is a standard Golconda/Hyderabad sort of portrait, but the second showing him seated with his young son Sahu (pl. IIIA), painted probably in the early 18th century by a Maratha artist, seems based on our portrait or one similarly early.  Both show the same Vaisnava sect mark on his forehead and the four chains of pearls attached to the back of his turban. 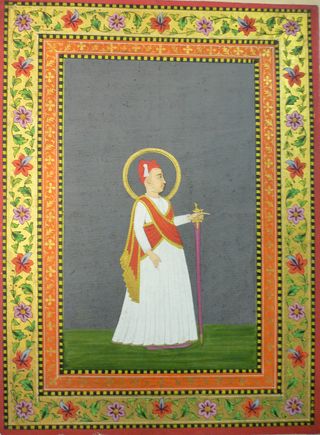 Next in the album comes an unattributed portrait which from the turban and clothing can only be one of the later Maratha Peshwas.  The Peshwas, all Chitpavan Brahmins, were the hereditary chief ministers of the Maratha kings, and after the descendants of Sivaji and Sambhaji had established themselves at Satara and Kolhapur, they ruled the empire in their name from their base at Pune.  The long shawl wound round the body is in the manner of the Bijapur and Golconda sultans of the 17th century.  The hairless face, long nose, protruding mouth, turban, clothing and Vaisnava sect mark all match those of the young Peshwa Madhavrao II Narayan (1774-1795), the posthumous son of the murdered Peshwa Madhavrao I, as seen for example in the portrait by James Wales dated 1792 in the collections of the Royal Asiatic Society (see the website http://www.bbc.co.uk/arts/yourpaintings).

The Maratha empire was governed by the famous statesman Nana Phadnavis during the Peshwa’s long minority.  Holly Shaffer who is currently researching Maratha paintings has kindly confirmed the identity of the sitter as the Peshwa Madhavrao II, based on an unpublished inscribed portrait of the same man in the Bharat Itihas Samshodak Mandal in Pune.  A portrait of his father, Madhavrao I with various attendants, ascribed to the Maratha artist Shivram Chitari, now in Aurangabad, is in a very similar style (Deshmukh 1992, pl. IX).  That portrait has a garden and palace background that suggests that the artist must have had some training in Hyderabad, which was the major artistic centre for the northern Deccan.  For painting in Hyderabad and its provinces in the later 18th century, see Zebrowski 1983, pp. 244-82.

These two portraits of Maratha interest are succeeded somewhat unexpectedly by a Jaipur painting of Radha and Krishna, portrayed as the hero and heroine of the month of Jyestha (May/June) from a Barahmasa set of paintings illustrating the twelve months of the Hindu calendar. 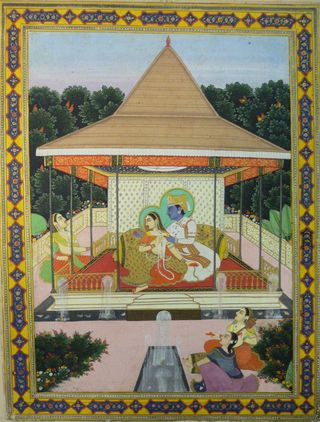 Krishna dressed as a young raja is embracing Radha, while being serenaded by two female musicians with tambura and drum.  Radha’s maid to the side holds the cord of a punkah hanging from the ceiling of the pavilion and Krishna with his hennaed hand held out seems to be encouraging her to work harder, to cool them down in the hottest month of the year.  Our artist’s attention to detail is exquisite – note particularly his foreground flowers and those round the balustrade, as well as the pairs of brilliantly coloured birds in the trees.  In a contemporary Barahmasa set of paintings from Jaipur in the History Museum, Aurangabad (fully published in Deshmukh n.d.), the month of Jyestha is a very similar composition to our painting (ibid., pl. 5), save that in place of the woodland surround there is a view of a distant landscape with tiny buildings and trees.  Krishna’s costume and appearance both in our painting and in the Aurangabad set leave little doubt that he is based on the portraits of the young Maharaja of Jaipur, Pratap Singh, as seen in a drawing in the BL when he is slightly older. 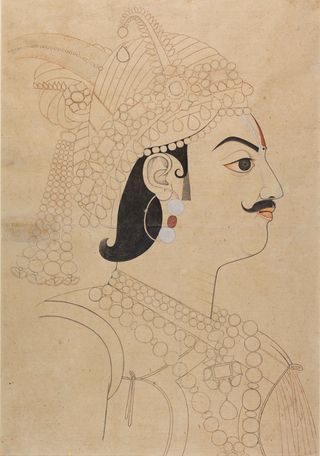 Another drawing formerly in the James Ivory collection shows Pratap Singh at a younger age without facial hair (Losty 2010, no. 46) and is even closer in appearance.  The enhanced curve of the eyebrow and the curl of hair at the back of the neck are similar in all these examples.  Shailka Misra, who is currently researching the Jaipur archives, advises that in a Ragamala set from Pratap Singh's reign, in the City Palace Museum, Pratap Singh also appears as the hero or nayaka of one of the Ragamala illustrations.  Jaipur paintings of this date are normally surrounded by broad red borders, but instead here there is a Mughal type of border of alternate large and small blue cartouches filled with arabesques against a yellow ground, suggesting influence from a late Mughal source.  Pratap Singh’s Ragamala in Jaipur also has the same kind of Mughal-influenced borders.

The angled hipped roof of the pavilion, normally seen in Avadhi paintings, and the attention paid to linear perspective suggest that our artist has been exposed to influence from Lucknow.  The connections between Avadhi and later Jaipur paintings are obvious but their means of transmission remain to be explored.  The Barahmasa set in Aurangabad also has similar angled hipped roofs as well as two other readily identifiable Avadhi characteristics:  distant tiny landscapes in the manner of the Faizabad and Lucknow artist Mihr Chand and a concern to show foreshortened buildings in linear perspective.

Given that the other paintings in the album are all associated with the Deccan, it would seem that this Jaipur painting would also have been collected there.  The many Jaipur religious and mythological paintings in the collection of Major Edward Moor, author of the Hindu Pantheon (London 1810), now in the British Museum, indicate that such paintings were readily available in Bombay and Poona where Moor served in the Bombay Army 1796-1805.  Jaipur seems to have been a centre for the dissemination of Hindu religious and genre paintings during this period, quite apart from the ones which were sent as gifts to other courts.  Our painting could easily have been part of a Barahmasa set sent as a gift to one of the Peshwas, perhaps Madhavrao II Narayan himself, and mounted up with other Maratha and Deccani material in this album. The Jaipur Barahmasa set now in Aurangabad came from the royal Satara collection and was possibly a gift from Pratap Singh to Maharaja Shahu II (reg. 1777-1810).

The remaining five paintings in the album are all from a large Hyderabad-influenced series of the Rasikapriya, the classic text by Keshav Das on Hindi poetics, and will be dealt with in a subsequent post.

Blumhardt, J.F., Catalogue of the Hindi, Punjabi and Hindustani Manuscripts in the British Museum, London, 1899