The Ramayana in Southeast Asia: (2) Thailand and Laos

Continuing our series of posts on the Ramayana in Southeast Asia, today we look at Thailand and Laos. The Thai version of the epic is known as the Ramakien. The Rama story is thought to have been known to the Thais since at least the 13th century. It was adopted from older Khmer sources, hence the similarity to the Khmer title Reamker. Various new versions of the story have been composed, often by royal authors, since the 16th and 17th centuries. However, large numbers of Thai manuscripts were lost with the destruction of Ayutthya in 1767, and the Ramakien known today was compiled only between 1785 and 1807 under the supervision of King Rama I (1785-1809).

The famous reliefs depicting about 150 scenes from the Ramakien at Wat Phra Chetuphon (Wat Pho) in Bangkok date back to the early 19th century. Manuscript and mural paintings showing scenes from the Ramakien are particularly famous for their illustrations of the monkey armies. Best known are the mural paintings at the royal temple Wat Phra Kaeo in Bangkok. In King Rama I’s version of the Ramakien all names, places, traditions, and flora and fauna were adapted to a Thai context. In this form, the Rama story has become an epic of national character in Thailand, and it is very popular not only as a literary work, but also as a mask dance (khon) and even TV drama. It has been re-published many times in the form of children’s and juvenile literature, and characters from the Ramayana have featured on series of postal stamps and trading cards. The title of Rama constantly re-occurs in the royal genealogies of Thailand. 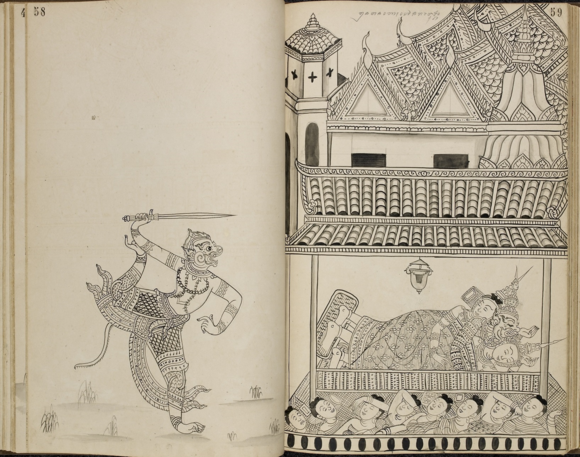 Hanuman facing Ravana asleep in his palace. This drawing is from a 19th century album of ink drawings by an anonymous Thai artist of scenes from the Ramakien, with some text captions in Khom script (a variant of the Cambodian Khmer script used in Thailand). Hanuman can be seen with his sword, teasing Ravana who is fast asleep in his palace after having abducted Sita. The palace resembles 19th century architecture in Bangkok. British Library, Or.14859, pp. 58-59 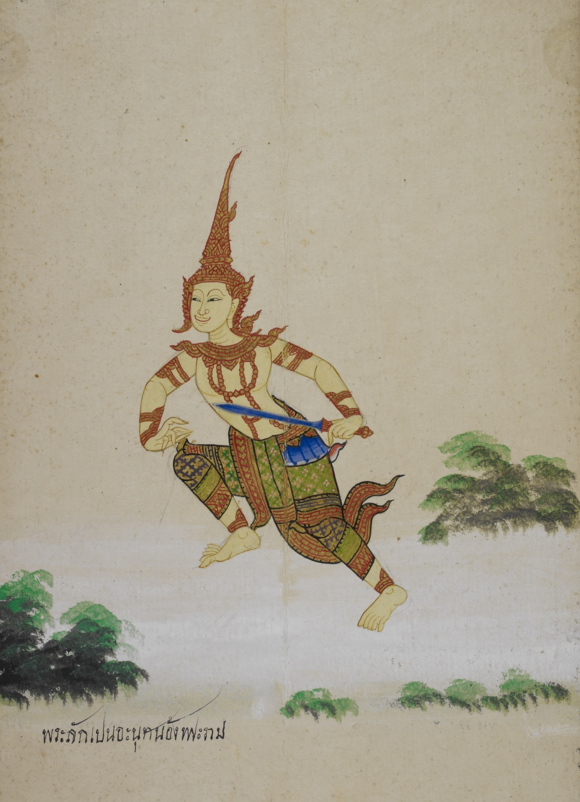 Phralak – the Thai and Lao name of Lakshmana, Rama’s brother – served Rama and Sita reverently and played an important role in the war with Ravana. In the Thai and Lao traditions, he is a symbol of brotherly love, loyalty and commitment. He gave his life in order to protect Rama’s integrity and Ayodhya from an evil curse. This illustration of Phralak is from a folding-book with Thai character drawings including figures from the Ramakien, central Thailand, 19th century. British Library, Or.14229, f. 29

The Lao version of the Ramayana is known as Phra Lak Phra Ram (or Pha Lak Pha Lam since in modern Lao R is often replaced by L), the title referring to both the brothers Lakshmana and Rama. Sometimes it is also called Phra Ram sadok (Rama Jataka) as it is widely believed that Rama was a former incarnation of a Buddha-to-be. The Rama story featured in many mural paintings and wood relief carvings on temple doors and windows. It was also one of the favourite themes in the repertoire of the Lao Royal Ballet until 1975, and this tradition has been revived since 2002 by the Royal Ballet Theatre of Luang Prabang. 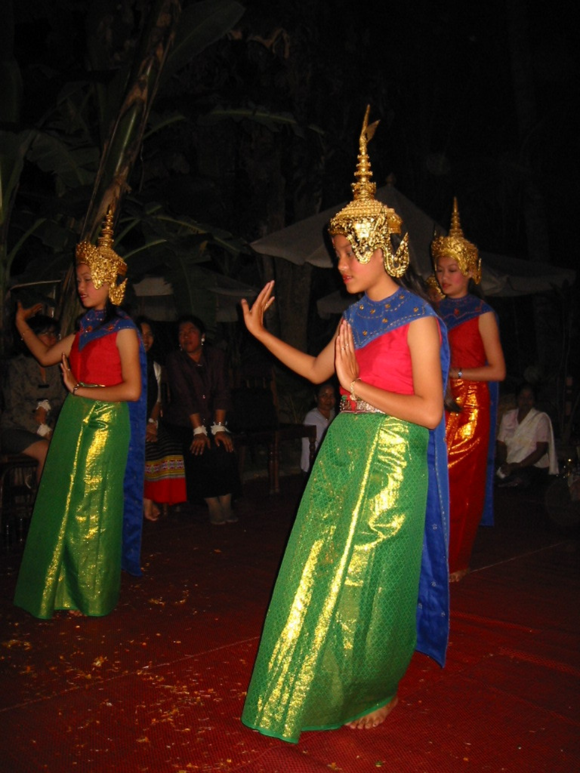 Introductory scene to thank and honour the Hindu gods during a Phra Lak Phra Ram performance by the Royal Ballet Theatre of Luang Prabang. Photo by Jana Igunma, 2002.

Numerous palm-leaf manuscripts from all regions of Laos containing shorter versions of the Lao Ramayana, Lam Pha Lam, show that the story was very popular all over the country in urban centres as much as in rural areas. These versions were created in order to be sung by a Mor Lam, a traditional expert singer who can melodically recite lengthy poems and epic literature while being accompanied by a Khaen (bamboo mouth organ).

In both Thai and Lao traditions, Hanuman was part of a favourite Yantra design used by soldiers and martial arts specialists. The leader of the monkey armies represents strength, stamina, agility, intelligence and devotion. Hanuman Yantras would either be drawn on protective shirts, headbands, battle standards of entire armies, or, most efficiently and durably, tattooed on a fighter’s body. 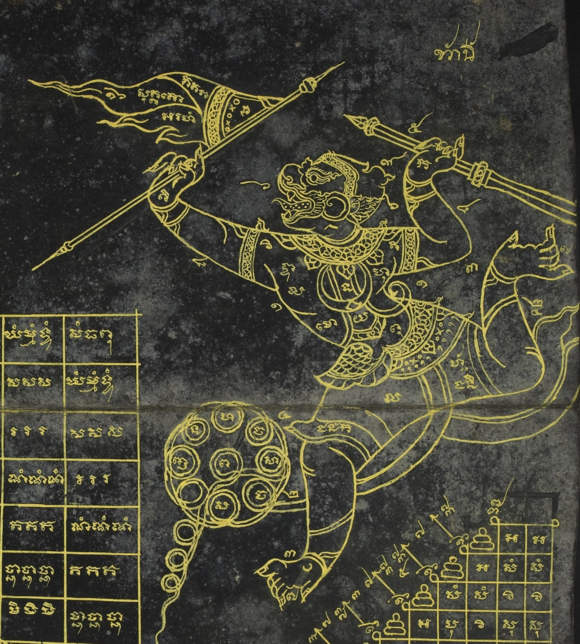 Hanuman as part of a Yantra design for tattooing or to be drawn on protective clothes and battle flags. From a Yantra manual written in gamboge ink on blackened mulberry paper, central Thailand, 19th century.  British Library, Or.15596, f. 9

The Ramakian (Ramayana) mural paintings along the galleries of the temple of the Emerald Buddha. Bangkok, 1999. (SEA.2002.c.3)

Posted by Annabel Gallop at 3:53 AM