A collection of Japanese and Chinese prints of the Sino-Japanese War, held in Asian & African Studies, is featured in a new web exhibition jointly created by the British Library and the Japan Center for Asian Historical Records (JACAR) in Tokyo.  The exhibition is bilingual and is available on JACAR’s website in English and Japanese versions. The images of the 235 British Library prints are being made available in the Public Domain for the first time. 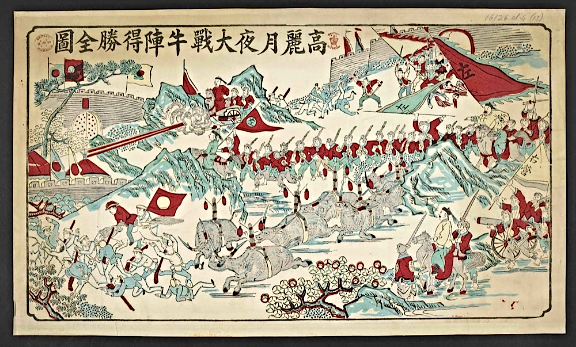 The Sino-Japanese War was fought from 1 August 1894 to 17 April 1895 between Qing China and Meiji Japan, primarily over control of the Korean peninsula.  The online exhibition entitled The Sino-Japanese War of 1894-1895: as seen in prints and archives brings together digital images depicting the Sino-Japanese War and related Japanese archival documents, digitised by JACAR, to show how the events of the war were depicted and recorded by people of the time.

Of the total collection of 235 prints, 179 were produced in Japan and 56 in China.  All but one [1] were acquired by the British Museum between April and October 1895 from Dulau & Company, Foreign and English Booksellers of 37 Soho Square, London for a total of £23 11s [equivalent to approximately £2300 today].  The overwhelming majority of the prints were produced using traditional woodblock technology but there are also a handful of lithographs among them. It is likely that these prints were acquired as a record of current events rather than for their artistic merit and so were never added to the other thousands of Japanese and Chinese prints in the British Museum.  Instead they were put into portfolios and included in the Japanese printed books sequence.  In 1973 when the British Library was established, the collections of the British Museum Library, including East Asian material, were divided between the two institutions. It seems that the war prints were overlooked and were not transferred with the rest of the Museum’s Japanese and Chinese prints to what was then called the Department of Oriental Antiquities and is now the Department of Asia. 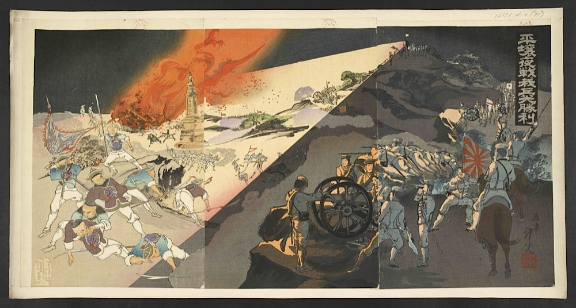 At the time of the war the prints served the role of modern news photographs, offering the Japanese and Chinese publics a visual impression of events as they unfolded.  They were produced quickly and in large numbers and vary greatly in artistic style and quality.  Examples survive today in many locations in Japan and overseas but a collection of this size is very rare.  Above all it is the presence of so many Chinese prints which makes the British Library’s holdings significant and one of the key aspects of the web exhibition is that it allows the events to be shown from both the Japanese and Chinese perspectives, albeit in very different ways.  The prints were also intended as domestic propaganda so it is instructive to be able to compare side by side images produced by both nations.  At the same time sensitive treatment and careful explanation of context is important for a modern audience. To provide a historical context and to enhance the research value of the exhibition, the staff of JACAR have selected relevant archival material on a range of topics including naval records from Japan’s National Institute for Defense Studies and documents from the Diplomatic Archives of the Ministry of Foreign Affairs which are presented on a thematic basis together with the visual material.  The website, which will be developed further over the coming months, also has maps and a chronology of the key events of the war, a select bibliography and a gallery providing Public Domain images of the 235 prints and bibliographic details for each.

Posted by Ursula Sims-Williams at 2:21 PM