The Death of Queen Victoria: the Politics of Mourning and Memorialisation in the British Persian Gulf

On the afternoon of 22 January 1901, Queen Victoria died at Osborne House on the Isle of Wight. In the United Kingdom, as well as many thousands of miles away around the Empire, reactions ‘were immediate and tangible’ with ‘sombre mood and suspension of normal activity’ (Wolffe, p. 224). 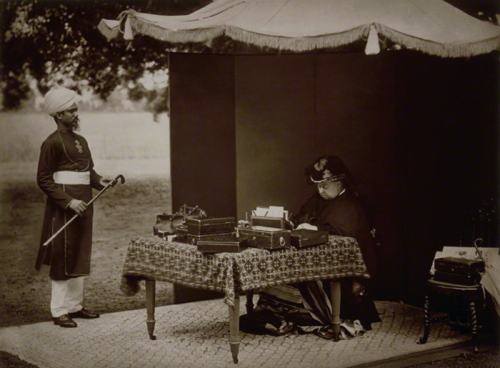 This atmosphere is reflected in the customs of mourning and commemoration, some of which the late queen was associated with in her lifetime. However, particularly in the context of the British Empire - over which Victoria had been ‘proclaimed’ Empress of India (Kaisar-i-Hind) in 1877 and whose image was ubiquitous on currency, postage stamps, portraits and statues - mourning and memorialising the dead queen-empress was a way of performing and solidifying imperial hierarchies and authority.

Mourning: Instructions to a Native Agent
Once news of the monarch’s death had reached Britain’s Persian Gulf administrative headquarters at Bushire, details were transmitted to its network of native agents on both the Arab and Persian littorals, including Khan Bahadur ‘Abd al-Latif, Britain’s Residency Agent at Sharjah, in modern-day United Arab Emirates:

It is with profound regret that the Political Resident and Consul General has directed me to announce to you the death [قد انتقلت من دار الفناء الى دار البقاء] on the 22 of January 1901 of Her Most Gracious Majesty Queen Victoria, Queen of the United Kingdom of Great Britain and Ireland and Empress of India. 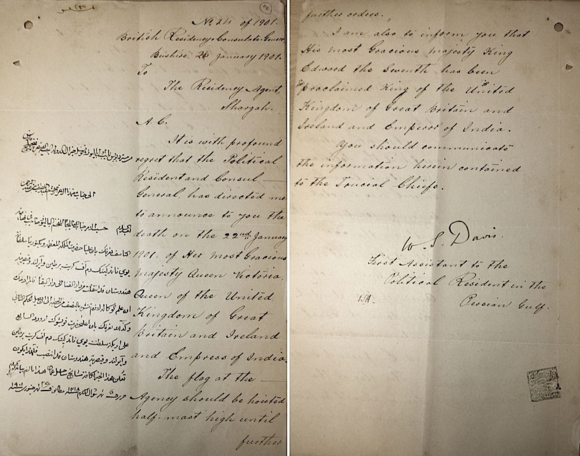 Instructions for mourning appeared in the same letter: ‘The flag at the Agency should be hoisted half-mast high [ان علم الوكالة لازم تنشره بالنصف من الحطبة] until further notice’. Subsequently, as directed by a Gazette Extraordinary, further instructions were sent to ‘Abd al-Latif and summarised in Arabic: ‘All persons will remain in deep mourning [الثياب السواد] up to March 6 inclusive and in half mourning [نصف الثياب سواد] up to April 17 inclusive’. In addition, ‘Officers of His Majesty’s Civil, Military and Marine services will when in uniform wear a band of crape on the left arm [يشدون على عضدهم قطعة سوداء التي تسمي كريب] up to July 24 inclusive’.

Another common mourning practice was issued to ‘Abd al-Latif on 1 March when the Residency forwarded to him ‘[two] quires of black-edged foolscap paper [كوير اثنى قراطيس مخصوص العزاء]’, informing him that ‘it should be used in all your official correspondence up to the 24 July 1901’. 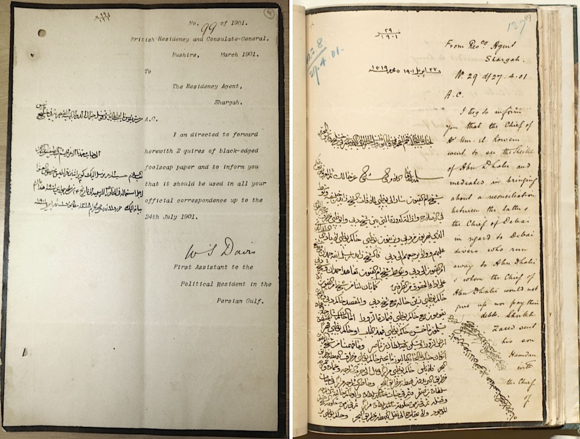 Some of these customs must have been lost in their ambiguous translation into Arabic or appeared culturally obscure on the Trucial Coast at the turn of the century. Yet, adherence to such practices constituted a ‘ritual idiom’, performed to express, make manifest and compelling Britain’s construction of colonial authority (Cohn, p. 208). Such rituals helped to locate both colonial administrators in the Bushire Residency and native agents like ‘Abd al-Latif in an imperial hierarchy of power presided over by the monarch-emperor. It is impossible to know exactly how and to what extent ‘Abd al-Latif performed these mourning practices, but we do have a letter from him to the Resident, dated 27 April 1901 / 5 Muharram 1319, written on the black-edged mourning paper provided by the Residency.

Memorialisation: A Hospital Fit for a Queen?
In November 1901, once the official period of mourning for Queen Victoria had passed, Gangaram Tikamdas and the other leading British Indian merchants of Bahrain offered 5000 rupees for the erection of a hospital to ‘perpetuate the memory of her late Majesty’. This donation was given in appreciation of ‘the blessings of free trade and peace they had enjoyed under British protection during the reign of the Queen’ (Saldanha, p. 126).

The Government of India acknowledged the merchants’ ‘loyalty and public spirit’. However, they were reluctant to support such a financially costly scheme unless some ‘political advantage’ would arise from it. The Political Agent at Bahrain, John Calcott Gaskin, managed to persuade his superiors that the hospital’s construction would be highly appreciated by the ‘natives’ and would serve as a ‘likely means to ingratiate ourselves to them’. It would also divert the sick from American missionary doctors operating in the Persian Gulf, thus bringing the inhabitants of Bahrain, and also the mainland of Eastern Arabia, under British influence. ‘For this reason principally’, he wrote, ‘the matter should be given favourably consideration by Government’.

While the bulk of the construction costs were met by subscriptions from among the Hindu community of Bahrain, as well as leading Arab and Persian merchants, such as Haji Muqbil al-Dhukayr and ‘Abd al-Nabi Kazruni (Fuccaro: p. 102), the Government of India undertook to finance the future maintenance of the hospital. In 1905 the Victoria Memorial Hospital, as it was named, opened its doors. 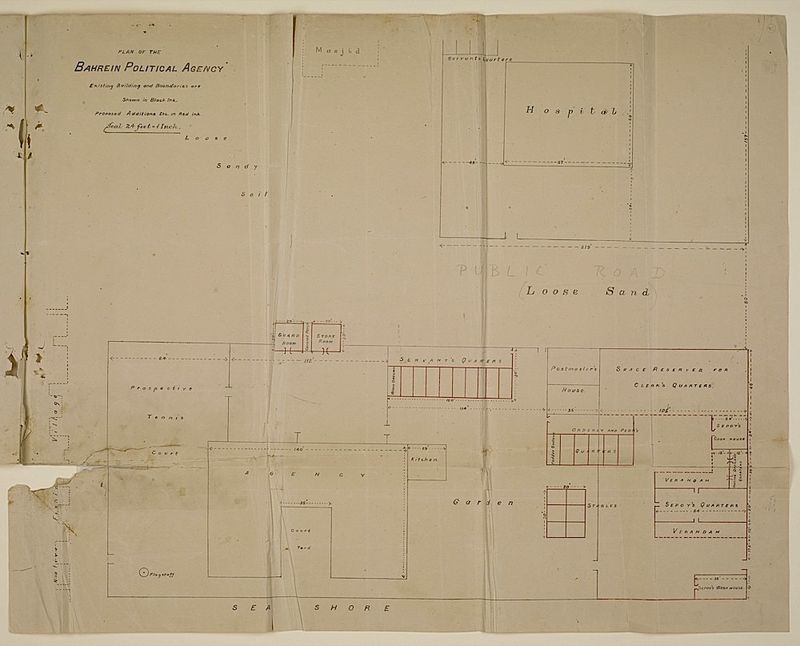 However, the myopic fixation with ‘political influence’, rather than public health, soon became apparent. Emily Overend Lorimer, wife of the Political Agent at Bahrain (1911-1912), wrote in a letter home to her mother that the Victoria Memorial Hospital was built without proper consideration of the costs. It was, she wrote, a ‘fine large hospital’ but with insufficient income. ‘When really bad cases come’, she noted, ‘we have to ask the Mission Hospital to take them in’ (Tuson: p. 107). Five years later, the poor state of the hospital was confirmed in a note written by G. H. K. Monani, the Agency surgeon: ‘The Hospital is very badly handicapped for want of funds’. The hospital was short of essential equipment and the surgical instruments it did have were outdated and incapable of being rendered thoroughly antiseptic. ‘We can’t buy them’, he wrote, ‘because they are costly’. The Government of India’s allotment for the hospital was inadequate causing it to be ‘absolutely impossible for me to cope with the number of patients’.

Although the construction of the Victoria Memorial Hospital was an expression of gratitude towards the late monarch, the funding of memorials such as these was a way for imperial subjects to perform and make concrete their loyalty and allegiance. Ultimately, these initiatives were politically advantageous for British colonial administrators since they helped to locate their subjects, such as the British Indian and merchant communities of Bahrain, in a system of imperial subordination, and to provide ‘material proof’ of British authority.