Though Iran was officially neutral when war broke out in 1939, many Iranians were sympathetic towards Germany which, they hoped, might liberate them from years of British and Russian oppression. An increasing German presence combined with British concern for continued supplies of Iranian oil led to Operation Countenance, an Allied invasion launched on 25 August 1941. As a result Reza Shah was deposed and replaced by his son Mohammad Reza Pahlavi. Iran was forced to abandon its neutral position though it did not actually declare war against Germany until September 1943. From 1941 onwards, British propaganda, published by the Ministry of Information (MOI), played a crucial role. Favouring a cultural approach, the MOI produced items such as the Shāhnāmah cartoons by the artist Kem (see our post ‘The Shahnameh as propaganda for World War II’) and the magazine Rūzgār-i naw, or The New Age which was published quarterly in Persian between 1941 and 1946. 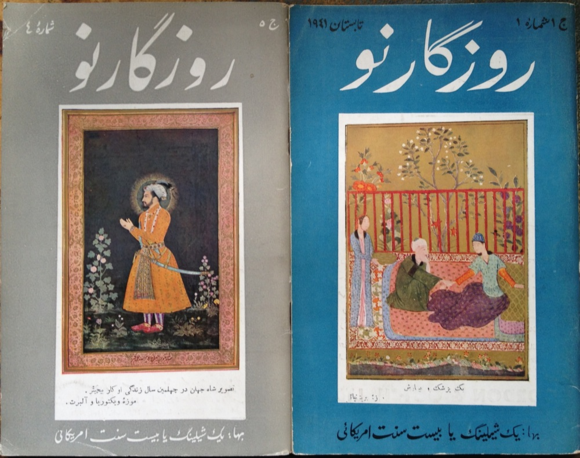 Rūzgār-i naw was published by Hodder & Stoughton in London and Doubleday Doran in New York on behalf of the MOI. It was primarily a cultural and literary magazine. The editor was A.J. Arberry (1905-1969) who had been Assistant Librarian at the India Office from 1934 until war broke out when he was seconded to Postal Censorship for a short period before being transferred to the Ministry of Information. Arberry left the Ministry in 1944 to become Professor of Persian at the School of Oriental and African Studies, but the magazine continued to be published until 1946 when the MOI was dissolved.

Arberry worked closely with a team of specialists drawn from his colleagues at the India Office and the British Museum together with Iranians such as the distinguished scholar Mojtaba Minovi who was working for the BBC Persian Service. Articles covered general cultural topics with a focus on the British contribution to Persian studies and Persian and English literature. Articles on science and technology were also included but nothing on religion or any other subjects which might be regarded as potentially controversial. 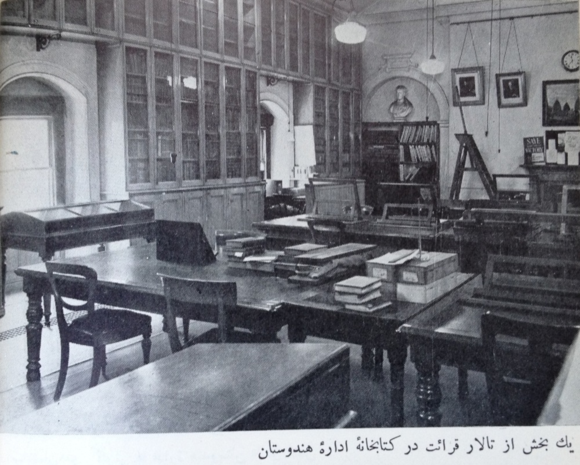 The Reading Room at the India Office Library. William Hodgesʼ painting ʻA Group of Temples at Deogarh, Santal Parganas, Biharʼ hangs above the fireplace with a poster on the mantelpiece urging readers to save for victory. Note that at 11.35 am. the reading room seems to be quite empty! 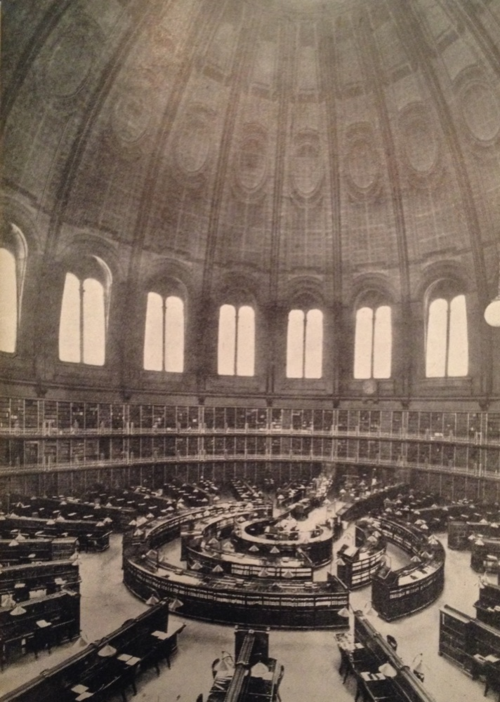 The Reading Room at the British Museum.

The contents of the first issue were fairly typical of subsequent numbers, containing the following articles: ʻIllustrations to the Khamsah of Nizami in the British Museumʼ, by Lawrence Binyon; ʻThe biggest cities in the worldʼ; ʻNizami: life, work and ethicsʼ; ʻIranian metal-workʼ, by Basil Gray; ʻBibliography of Nizamiʼ, by C.A. Storey; Persian translation by Mojtaba Minovi of the ‘Hound of Heaven’ by the English poet Francis Thompson (1859-1907); ʻThe English constitution part 1: historical introductionʼ; ʻThe India Office Libraryʼ, by A.J. Arberry; ʻThe world of printʼ; ʻBritish wartime exportsʼ; and ʻEnglish successes in industrial researchʼ. Subsequent issues contained a series of English translations of modern Persian poets, Persian translations of modern English poets, descriptions of libraries, articles on China by Lionel Giles as well as one-offs such as ʻPersian language roots in Malay literatureʼ, by Sir Richard Winstedt and ʻThe land of Khotanʼ, by H.W. Bailey. 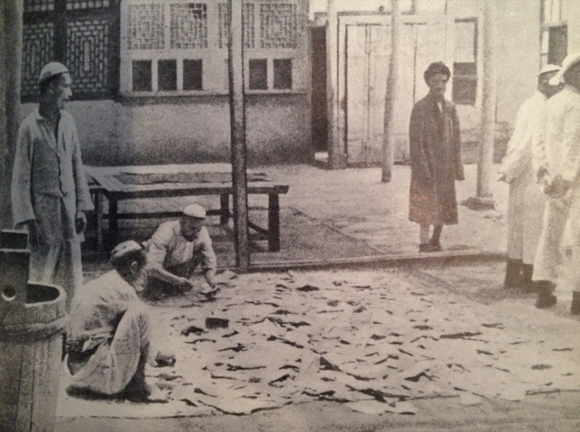 From ‘The land of Khotan’ by H.W. Bailey. This photograph of the Mint in Khotan shows newly printed banknotes spread out on the ground to dry in the sun before being put into use.

The covers always included coloured photographs, usually of miniatures in the British Museum, copies of which could be obtained free of charge. Apparently (Holman 2005, p. 218), the original photographic blocks were destroyed in the Blitz so copies had to be made from colour postcards. Nevertheless the quality of the paper and printing was good. One of the considerable merits was the large number (about 70 per issue) of black and white photographs (particularly portraits of British orientalists) and art work each issue contained – though attributions were unfortunately hardly ever included.  The first issue had in addition 4 colour plates. 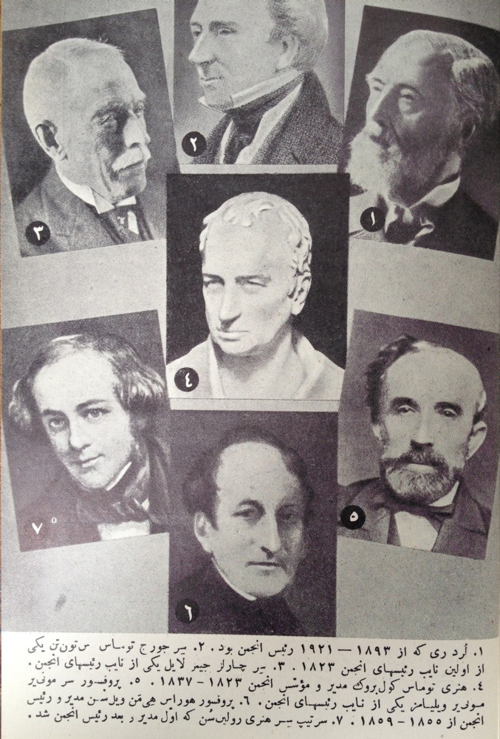 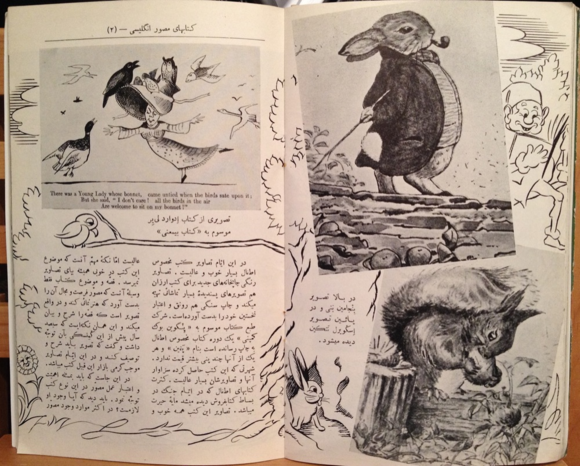 The MOI was concerned that its magazines should appear as commercial publications, hence the price of 1 shilling or 20 cents and the inclusion of advertising. It particularly favoured advertisements which ‘will advance British industrial and commercial prestige’ (Holman 2005, p. 217). 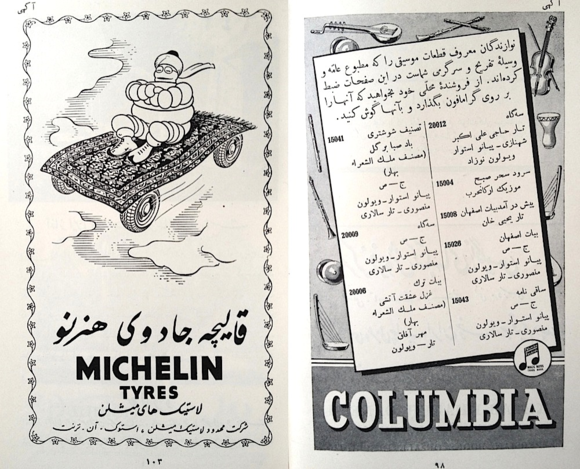 The magazine was judged sufficiently successful for the Ministry of Information to launch a companion magazine in Arabic in 1943. With the title al-Adab wa al-Fann, it was also published by Hodder & Stoughton who were proud to be associated with it (Holman 2005, p. 217). 15,000 copies of the Arabic magazine were distributed in the Middle East and North Africa and in India and Brazil. In Egypt, the Director-General of the Egyptian State Library in Cairo wrote in Sept 1944 that crowds of readers had been coming to read ‘this valuable magazine’ (Holman 2005, p. 218). It is possible that comparable data for Rūzgār-i naw may be available in the National Archives Kew. At any rate if the MOI was successful in winning over Iranian hearts, they must have been disillusioned a few years later when Britain’s involvement in the coup of 1953 toppled Iran’s democratically elected government and re-instated the Pahlavi regime. Nevertheless, Rūzgār-i naw testifies to a little known phase of Anglo-Iranian history besides being a wonderful resource for photographs of British orientalists.

For a pdf of the contents of each issue click here