My last few posts, on documents from the Muslim sultanates of the southern Philippines, have highlighted the diverse linguistic landscape. The treaties signed by Alexander Dalrymple with the sultanate of Sulu in the early 1760s were written in English and Malay or Tausug. In Mindanao, during the visit by the British sea captain Thomas Forrest in 1775, the Raja Muda of the sultanate of Maguindanao and his father Fakih Maulana wrote to King George III and the East India Company in Malay, the letters being penned by Fakih Maulana himself. In fact, as noted by Forrest during his eight-month stay in Maguindanao, the main medium for both oral and written communication was the Maguindanao language, and Fakih Maulana consulted royal genealogies written in Maguindanao.  Presented below are two letters in Maguindanao, one of which is from Fakih Maulana, written three decades before Forrest's visit. On the basis of inscriptions in the top-left corners of the first pages, both letters are addressed to Don Pedro Zacarias Villareal, an admiral and later sergeant major, and from 1755, Governor of Zamboanga (information from R. Orlina). He  was dispatched to Zamboanga in 1731, where Maulana Jafar Sadik, sultan of Tamontaka, requested Spanish assistance in quelling a rebellion by his nephew Malinog. After Jafar Sadik was killed in an attack by Malinog's forces in 1733, Zacarias came to the aid of his son Muhammad Amiruddin Hamza (Fakih Maulana). Following Malinog’s death in 1748, Fakih Maulana emerged as paramount chief of Maguindanao, as he himself  recounted to Forrest.

The letter from Fakih Maulana, Or.15510 A, consists of four densely-written pages, and concludes with a statement of the date, 20 Rabiulawal 1159, equivalent to 12 April 1746. Although the writer is not identified in the letter itself, in the bottom left corner of the last page is impressed an eight-petalled round lampblack seal, inscribed in Arabic, al-mutawakkil `alâ Allâh huwa al-Sultan Muhammad Syah Amiruddin fî balad `âlam Mindanâwî, ‘He who entrusts himself to God, he is the Sultan Muhammad Syah Amiruddin, of the state in the land of Mindanao’, and the signature in Latin characters, Jamdsa, represents 'Hamza' in Spanish orthography. In the letter Fakih Maulana refers disparagingly to Malinog, and recounts a complex operation to recover booty that had been seized. 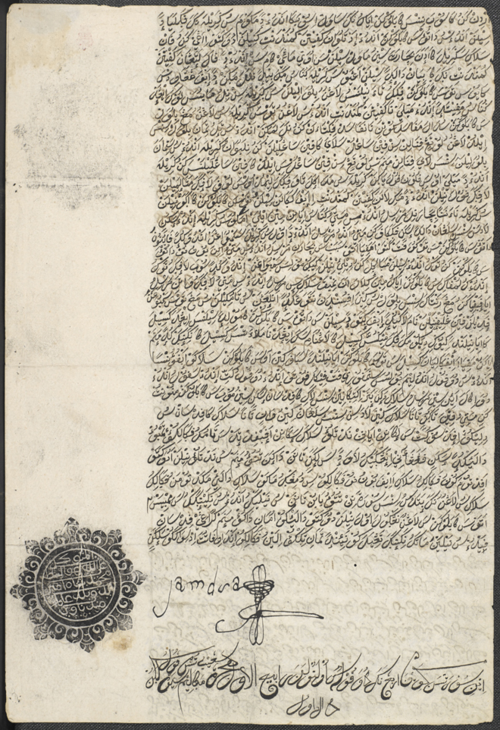 The last page of a four-page letter in Maguindanao in Arabic script, from Sultan Muhammad Syah Amiruddin of Maguindanao (Fakih Maulana), 1746. British Library, Or. 15510 A, f.2v.

The second letter, Or. 15510 B, is just one page long, with a final line, written in Malay, giving the year as 1159 (1746/7 AD). The octagonal seal on this letter is inscribed, al-mu'ayyad billâh Sultan Muhyiuddin ibn al-Sultan Diauddin, ‘He who is supported by God, Sultan Muhyiuddin, son of the Sultan Diauddin’. It is often difficult to link up formal regnal names given on Islamic seals from the Philippines with royal titles referred to in other historical sources, and this sultan has not yet been positively identified, as the name of the sender is not given in the text of the letter itself.  The letter does however refer to the ruler of Buayan, a realm inland from Maguindanao which was the stronghold of Malinog. 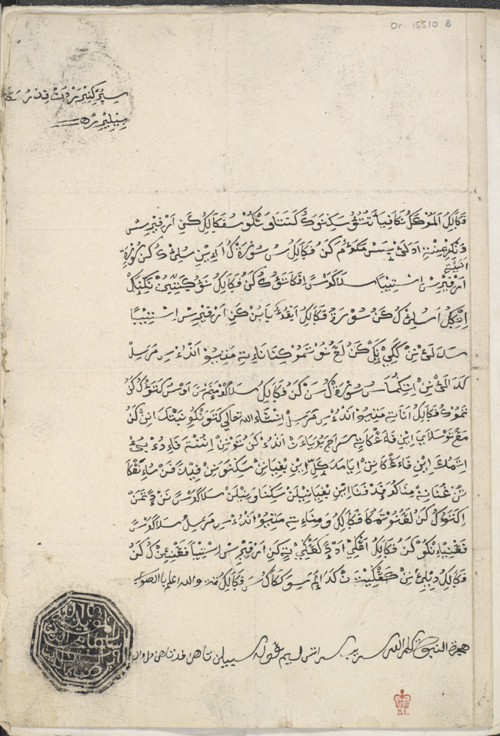 The two letters in Maguindanao reproduced here have just been fully digitised. In written form, Malay, Tausug and Maguindanao all use the modified form of the Arabic script called Jawi, with five additional letters representing sounds not found in Arabic.  The main difference is that while vowels are rarely indicated in Malay with diacritical marks, Tausug and Maguindanao are always fully vocalised.

One distinctive aspect of the diplomatics of both letters deserves mention. Throughout the Islamic world, in letters and documents written in Arabic script, irrespective of language, the lines of writing are generally arrayed against the left-hand edge of the paper, leaving a margin along the right-hand side – as indeed was the case in the Tausug and Malay documents discussed above. In these two letters, however, the text block is sited on the right-hand side of the paper, leaving a wide margin on the left; an exceptionally unusual arrangement for documents in Arabic script, and it is possible that Spanish influence may have led to this particular format.

For information on the contents of the two letters I would like to acknowledge the invaluable help of Roderick Orlina, Darwin Absari and Nasrudin Datucali.

Posted by Annabel Gallop at 1:28 AM