Burmese scenes from the Life of the Buddha

Three richly illustrated Burmese manuscripts in the British Library on ‘The life of the Buddha’ have recently been digitised. In line with the conventions of Burmese illustrated parabaik or folding books, chronologically consecutive events are often presented side-by-side within the same frames.

The prince Siddhartha, son of King Suddhodana, was born in Lumbini Garden, which lay in the foot hills of the Himavanta, on Friday, the full moon day of the month Kason (May), around the year 563 BC. Eight of the king’s Brahmins (wise men) chose the name Siddhartha for the baby, which means ‘one whose purpose has been achieved’. Before the conception of the prince, his mother Queen Mahamaya dreamt that a white elephant holding a white lotus flower in its trunk entered her womb through her right side. This was interpreted by the Brahmins that the child would become the sovereign of the whole universe, or the Enlightened Buddha.

In the Palace: in the centre, Prince Siddhartha is depicted on the throne in his palace, being entertained by court musicians, with his wife Yasodharā on the smaller throne to the left.  On the right, Prince Siddhartha, who is riding in his gilded carriage, points to the figure of a saffron-robed monk – the last of the four signs encountered by the Prince. British Library, Or.14197, ff.1-3.

King Suddhodana tried to prevent his son from coming into contact with any religious or spiritual path in order to steer him towards becoming the next king of the Shakyas. When Siddhartha reached the age of sixteen, he married his cousin Princess Yasodharā. In his late twenties, as he was setting out for the royal garden, Prince Siddhartha encountered the ‘four signs’: an old man, a sick man, a corpse, and an ascetic. Through them he realised that the vanity of youth, as well as one’s health, and even life, may end at any time, and the only way out of this suffering world of samsara was through finding and following the right spiritual path. At the age of twenty nine, Yasodharā gave birth to a son, Rahula. On hearing the news, Siddhartha began thinking that the little son would hinder his intentions. He ordered his minister Channa to saddle his horse Kanthaka, then, leaving all behind, he set out in search of Truth and Peace.

The Great Departure: shown above is the famous renunciation of Prince Siddhartha. On the left, he takes a last look at his sleeping wife and newborn son. Then he rides out of the palace, while the gods muffle the horse’s hooves with their hands so that the palace and city will not be awakened.  British Library, Or.4762, ff. 3-5. 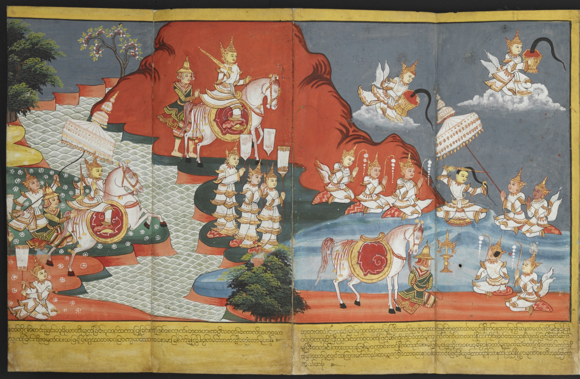 At the River Anomā: Prince Siddhartha reaches the River Anomā and cuts off his long topknot of hair and casts it into the air, where it is caught by Sakka, king of the gods, who enshrines it in Tavatimsa heaven. British Library, Or.4762, ff. 9-10.

Prince Siddhartha instructs his charioteer to return to the palace with his horse Kanthaka, and give news of him to his family. But Kanthaka refuses to go back without his master, and dies of grief. The prince is presented by the gods with the requisites of a monk and, robed as a monk and carrying his alms bowl, begins his life as wandering ascetic. After the king of Magada heard of him wandering and accepting offerings of food from his people, he revered the Bodhisatta and offered him his Kingdom of Rajagaha.  Bodhisatta refused, saying that he had severed all ties because he sought deliverance and wanted to seek Enlightenment.

After six years of hardship, working to find the right spiritual path and practising on his own to seek enlightenment, Prince Siddhartha reached his goal of enlightenment when he was thirty five. 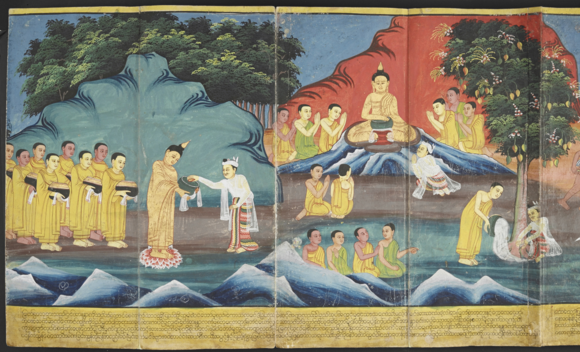 The mango tree miracle: the Buddha, on being presented with a ripe mango, instructs that its stone be planted and watered, whereupon a huge mango tree springs up covered in fruit and flowers. British Library, Or.5757, ff. 9-10. 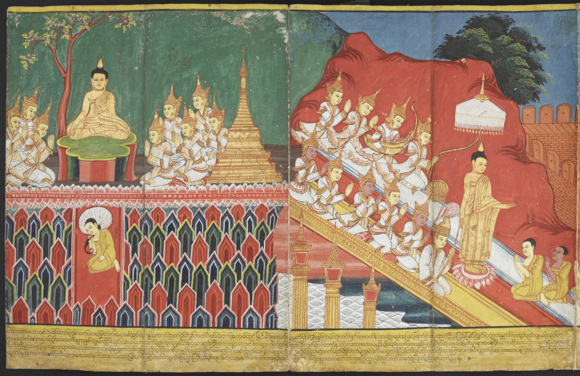 Preaching in Tavatimsa: in three strides, the Buddha reached Tavatimsa heaven where he preached to his mother and to the gods for three months, before descending to earth by a triple stairway of gold, silver and jewels, with gods and Brahmas in attendance. British Library, Or.5757, ff. 17-18.

The Buddha spent the rest of his life teaching Dhamma (the path of righteousness).  His teaching was quite practical, as he never taught what he himself had not seen and known.  In his eightieth year when he was in Kusinara, he had a severe attack of dysentery. Buddha consoled Ananda who was weeping, and then called his disciples together and addressed them to work on their salvation with diligence. Then Buddha entered Paranirvana, from which there is no return.

The three ‘Life of the Buddha’ parabaik which have recently been digitised are Or.14197, Or.4762 and Or.5757.  Shown above are scenes from Or.14197 of Prince Siddhartha seeing the last of the four signs, an ascetic; the announcement of the birth of his son Rahula; and Prince Siddhartha’s departure from the palace. From Or.4762 are scenes of the story of the Buddha’s life, from his departure from his royal position, and his life as a wandering ascetic before his enlightenment. Or.5757 is an illustrated account of the Buddha’s life containing twenty scenes including the performing of miracles and spending the rainy season or Buddhist Lent at various places.

Patricia M. Herbert. The life of Buddha. British Library, 1993. (The illustrations in this book are from two other Burmese manuscripts in the British Library,  Or.14297 and Or.14298, which have not yet been digitised.)