Palm leaves have been a popular writing support in South and Southeast Asia for about two thousand years. In Thailand, palm leaf manuscripts were produced mostly for religious, literary and historical texts, but also for works relating to astronomy and astrology, law, history, and traditional and Buddhist medicine. 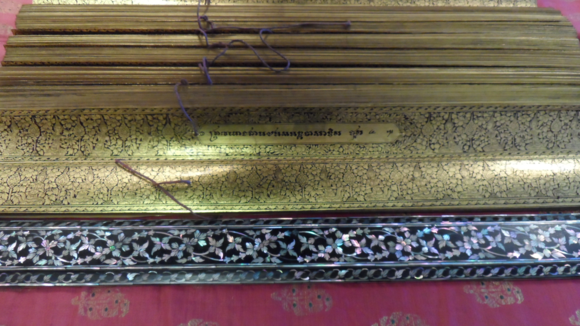 A royal edition of the Samantapāsādika-atthakathā-yojanā, British Library, Or 5107.

Both the palmyra and talipot palms were used for the production of manuscripts in Thailand. The palm leaves, which were first boiled and then dried and sometimes smoked or baked in a kiln before being written on, are robust and can last for as long as 600 years even in the humid, tropical climate of South and Southeast Asia. Each leaf contains between 3 to 5 lines of writing, but occasionally we also find miniature illustrations or gilt ornaments decorating the text. In central Thailand, the text was mostly written either in Thai or in Khom script, which is a variant of Khmer script used in Cambodia. The writing was usually incised with a hard wood or metal stylus, after which soot or lampblack mixed with oil was wiped onto the leaves and then wiped off again, leaving the black pigment only in the incisions. In rare cases, black ink was used to write the text on to the palm leaves with a bamboo pen or a brush.

A bundle of leaves, called phūk in Thai, was usually fastened together with two cotton cords, which were threaded through two holes pierced through the leaves of the entire manuscript. Title indicators made from wood, bamboo or ivory, with the title or a very brief description of the contents of the manuscript, were sometimes tied to a palm-leaf manuscript in order to identify the text(s) contained within.

Valuable manuscripts or important Buddhist works were protected from physical damage with wooden boards, which could be beautifully carved, gilded, lacquered, or decorated with mother-of-pearl inlay. Sometimes, palm leaf manuscripts were wrapped in cotton or silk cloth, or were kept in custom-made gilt and lacquered wooden cases to protect them from damage by rodents, insects or water.

Shown at the top of this page is a manuscript consisting of fifteen bundles of palm leaves that contains part of a commentary on the Vinaya-pitaka. The manuscript is in Pali language, but written in Khom (Khmer) script, and dates back to the nineteenth century, between 1824 and 1851 A.D. Each section of this important Buddhist work has magnificent title leaves with gilt and black lacquer decorations showing celestial figures (devata) and flowery patterns. 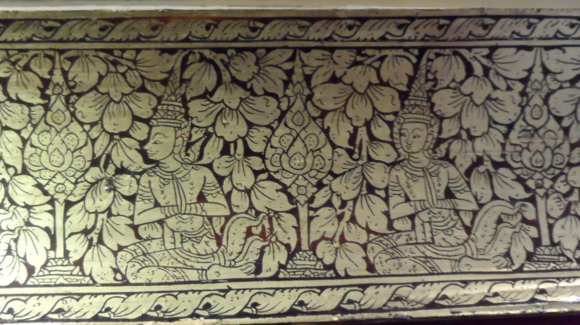 Detail of the front leaf of the third bundle of British Library, Or 5107.

The wooden covers of this manuscript are lacquered black, with patterns of leaves and flowers in mother-of-pearl inlay. The manuscript is stored in a red silk and cotton wrapper of Indian origin with a gold thread pattern, made to order for the Thai royal court. This manuscript is of the same high standard as manuscripts given to Wat Chetuphon in Bangkok by King Rama III.

Idyllic scenes from the heavenly Himavanta forest to accompany extracts from the Sutta-pitaka, painted on palm leaf. British Library, Or 16753.

This fragmented manuscript shown above dates back to the early nineteenth century. The Pāli text is written with black ink in Khom (Khmer) script which was used in central Thailand mainly for Buddhist texts in Pali or in Thai language. Painted illustrations on palm leaves are very rare. Their production required special skills and experiences which only painters working for the royal court were able to acquire, hence the outstanding quality of these miniature-sized paintings.

Covers belonging to a royal edition of the Paññāsa Jātaka, British Library, Or 12524. The wooden covers are decorated with black lacquer and gilt plant ornaments.

Extra-canonical birth tales of the Buddha, known as Paññāsa Jātaka are popular all over mainland Southeast Asia.  This 19th century manuscript consists of 469 palm leaves with gilt edges, in ten bundles. The text is written in Khom (Khmer) script. 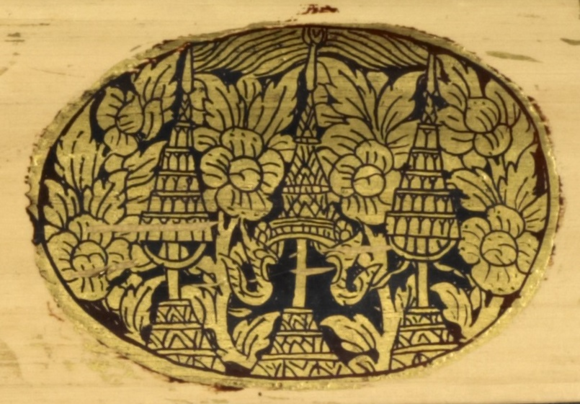 Detail of the second leaf of the first bundle of British Library, Or 12524, showing a royal seal of King Rama IV.

The manuscript has gilded front and back leaves for every bundle. Each leaf following a front leaf has two oval illustrations; one on the left showing a heavenly vihāra, and one on the right showing the royal seal, depicting the crown between two parasols.

An ivory title indicator with a hand-woven title band for a Buddhist palm leaf manuscript containing an extract from the Patimokkha, the basic code of monastic discipline. John Rylands Library (Manchester), Pali MS 82.

This title indicator from the mid-nineteenth century is inscribed in Khom (Khmer) script, giving the title and number of palm-leaf bundles contained in the manuscript. It has a carved flowery design and a hole at one end to attach it to a rope that is wrapped around the manuscript. To the manuscript also belongs a piece of silk and cotton cloth similar to the one shown above in British Library Or 5107. The title band contains the same information as the ivory indicator. It has some similarities with Burmese sazigyo or woven title bands, but it is much shorter and attached to the same rope as the title indicator.

Title indicators and bands were important means of identifying manuscripts when these were stored together in huge wooden cabinets, often lavishly decorated with black or red lacquer, gilt, mother-of-pearl inlay or mirror glass inlay.

A wooden case from the 19th century with gilt and lacquer relief decorations showing heavenly deva figures (see detail below) and floral designs. The case was custom-made for one Buddhist palm-leaf manuscript, British Library Or.16820/B. 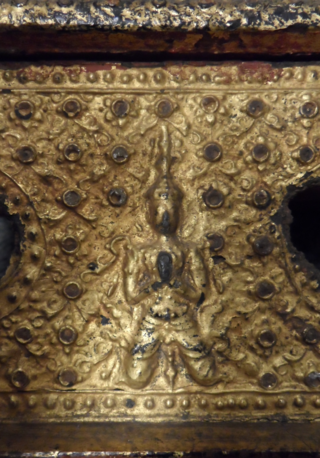 Detail from the wooden case above, showing a guardian figure or deva on a flowery background made from metal wire, lacquer and very thin gold leaf. The metal wire circles used to be decorated with mirror glass inlay which has been lost. British Library Or.16820/B.

There are three types of traditional manuscript storage caskets in Central Thailand: the single manuscript case, the chest and the cabinet. All three are usually made from wood, often beautifully carved or decorated with lacquer and gilt, or sometimes with intricate mother-of-pearl inlay. Cases for single manuscripts were specially made for valuable Buddhist works, such as manuscripts sponsored by members of the royal family or manuscripts that were produced for a special occasion like a monk’s ordination.

Guy, John. Palm-leaf and paper, illustrated manuscripts of India and Southeast Asia. With an essay by O.P. Agrawal. Melbourne : National Gallery of Victoria, 1982

Posted by Annabel Gallop at 3:09 AM