The Serat Selarasa (MSS Jav. 28) is the most beautiful illuminated Javanese manuscript in the British Library. It is dated 1804, making it perhaps the earliest finely-illustrated Javanese manuscript known. The manuscript tells the story of Selarasa, prince of Champa, and his two brothers, who are forced to leave their kingdom after their elder brother becomes king and treats them with disdain. Selarasa and his brothers subsequently undergo many adventures and trials during their enforced travels. 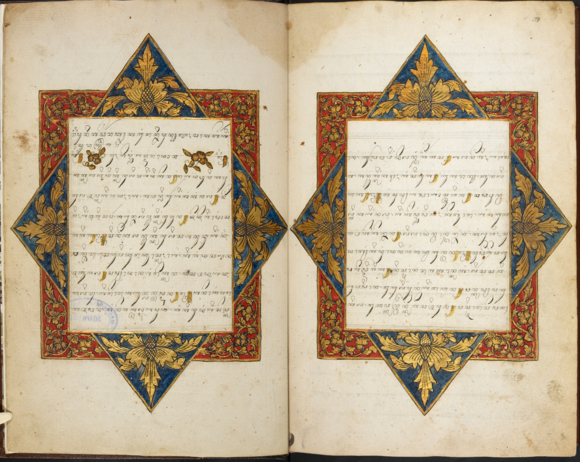 The manuscript opens with a beautiful pair of symmetrical double illuminated frames reflecting an aesthetic common throughout the Islamic world. Thereafter, the 163 illustrated pages (out of a total of 295 pages of text in this manuscript of 148 folios) are rooted in the iconography of the Javanese shadow-puppet theatre (wayang kulit), with characters drawn in three-quarters profile, with angular shoulders and long thin jointed limbs. The more aristocratic a personage the more stylized their depiction, while servants from the lower classes are drawn more realistically, with rounded faces and bodies. 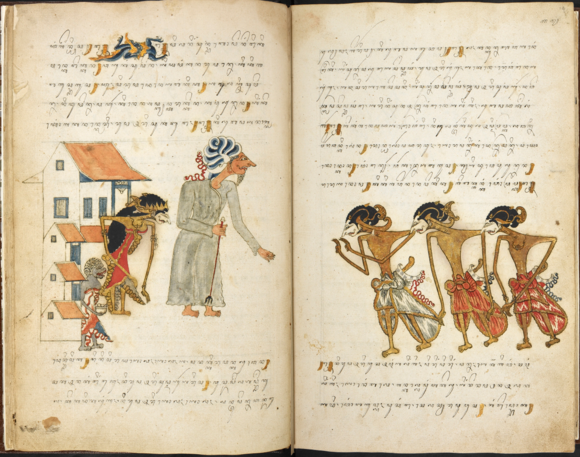 Prince Selarasa and his two brothers (on the right) pay respects to a holy man (in Islamic robes, with a turban and staff), and his daughter Ni Rumsari, who had dreamt that three handsome men would come to visit. Behind Ni Rumsari is her dark-skinned servant, Ni Jumunah, perhaps originating from eastern Indonesia. British Library, MSS Jav. 28, ff. 13v-14r.

Although the manuscript was illustrated by the same artist throughout, there is a different approach in the first part of the manuscript, in the seven illustrations up to f.19v.  In these initial pages, the pictures are larger and the characters range across the whole page, sometimes with ethereal pastel backgrounds, and clever use of framing devices. 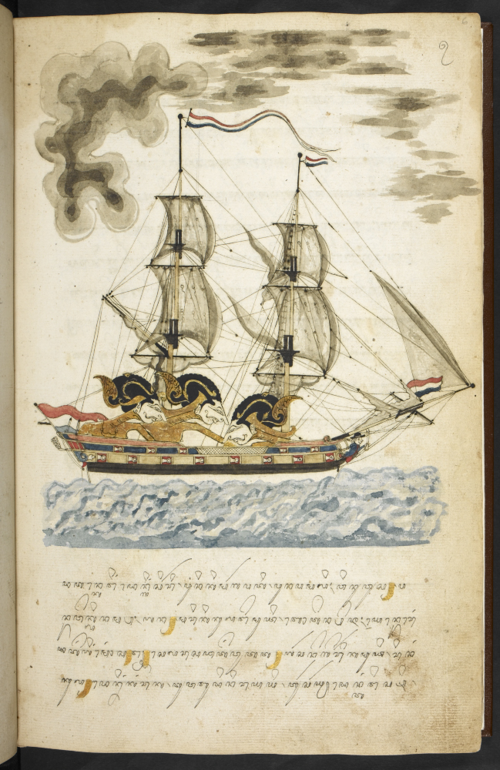 Selarasa and his two brothers set sail from Champa in the middle of the night. They are caught in a storm for three days and three nights, before landing on the island of Nila. Note the Dutch flag flying from the ship; such anachronisms are common in Javanese manuscript art. British Library, MSS Jav.28, f.6r. 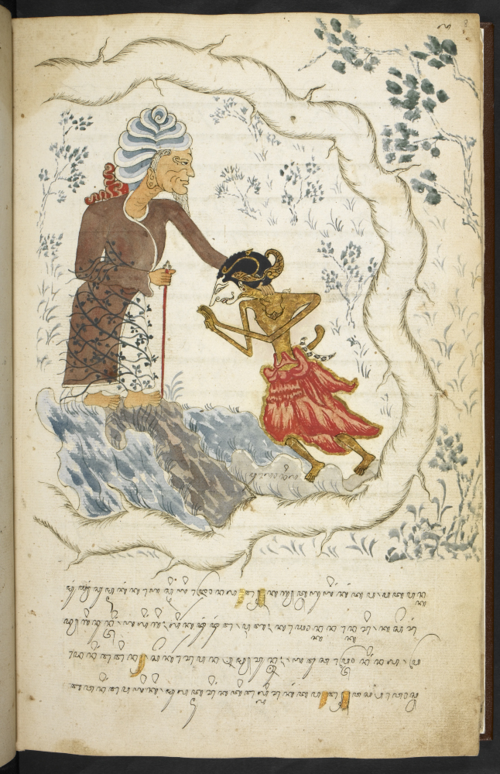 Prince Selarasa kneels before a holy man, Kiai Nur Sayid, who has stayed in one place for so long, neither eating nor drinking but smelling flowers and praying to God, that a vine has grown up around his body. The narrative power of the image is reinforced by enclosing the whole scene within a vine. British Library, MSS Jav.28, f. 8r. 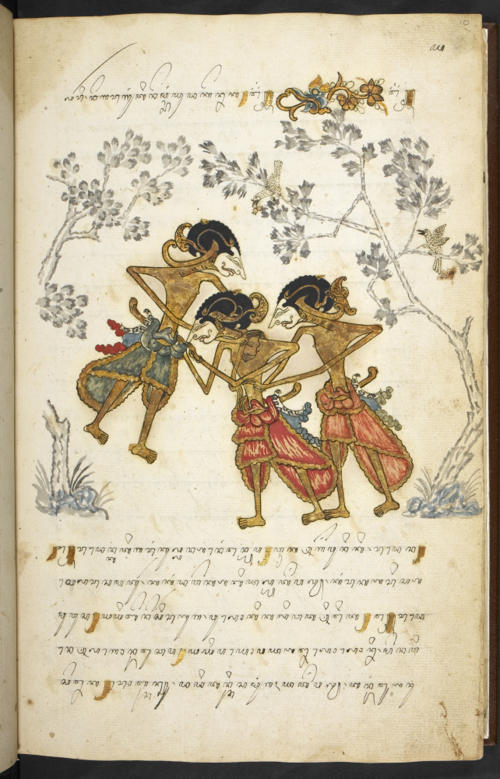 Selarasa returns to his brothers, who had feared him lost, and they embrace. The holy man had plucked three hairs from Selarasa's head; they each place a hair on their stomachs and their hunger vanishes. Serat Selarasa, British Library, MSS Jav. 28, f. 10r.

There is a distinct change in later pages as shown below, where the illustrations are nearly always positioned much more conventionally along the bottom of the page, essentially on a single horizontal plane, reminiscent of the arrangement of shadow puppets on either side of the puppeteer’s screen. One wonders what caused this change of tempo: was it much easier for the scribe to plan on leaving regular gaps at the bottom of pages, rather than having to work so closely in tandem with the artist, and make allowances for irregular-shaped spaces on the page? It cannot have been for reasons of economy, for the  number of illustrations greatly increases through the manuscript: there are 23 illustrations on the first fifty folios, 59 on the next fifty, and 81 on the final third of the book. 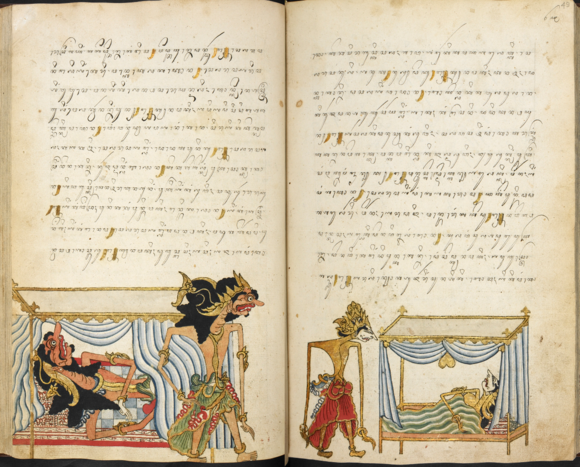 On the left, asleep in bed, is the ferocious Raja of Mendunga island; on the right, Selarasa glimpses the Raja's beautiful younger sister, Puteri Ratna Pangrungu, and falls in love with her. British Library, MSS Jav.28, ff. 48v-49r.

According to a note in the text, this manuscript was once owned by the wife of a Dutch East India Company official in Surabaya. This was probably F.J. Rothenbühler, from whom Col. Colin Mackenzie of the East India Company received this manuscript in 1812.  Mackenzie evidently had a special interest in this manuscript, for amongst his private papers is a complete English translation of the Serat Selarasa (British Library, Mackenzie 1822, vol.28, pp.1-152), on the basis of which the scenes above have been described. Mackenzie, who served under Thomas Stamford Raffles during the British administration of Java (1811-1816), owned a large collection of Javanese manuscripts, including many taken from the Palace of Yogyakarta after it was attacked by the British in June 1812, and these are now in the British Library.

The manuscript of Serat Selarasa has long been appreciated for its exceptional artistry. Along with a selection of royal letters and other manuscripts, it travelled to Indonesia in 1991 for display in the exhibition 'Golden Letters: Writing Traditions of Indonesia', held at the National Library in Jakarta and at the Palace (Kraton) of Yogyakarta. Serat Selarasa was also the first of three Javanese manuscripts in the British Library to be digitised, along with two other finely illuminated manuscripts, Serat Damar Wulan (MSS Jav. 89) and Serat Jaya Lengkara Wulang (MSS Jav. 24). Digital copies of all three manuscripts have been presented to the Regional Library and Archives Board of the Special District of Yogyakarta (Badan Perpustakaan dan Arsip Daerah DIY). During a visit to Yogyakarta last week to speak at the 'Seminar on the treasury of Yogyakarta archives from the time of Thomas Stamford Raffles', I spoke about the British Library’s digitisation programme and how we hope soon to digitise more Javanese manuscripts, especially those originating from the royal library of Yogyakarta, in order to enhance access to these great treasures of Javanese culture.

From left to right, historian Dr Peter Carey, expert on Javanese manuscripts and the British period in Java; ATG; panel chair Dr Abdul Wahid from the history department of Gadjah Mada University; Mr Budi Wibowo, head of the Regional Library and Archives Board of Yogyakarta.