In my last post, I discussed the Bugis diary of Sultan Ahmad al-Salih Syamsuddin of Bone (r.1775-1812) in south Sulawesi (Add. 12354), which has just been digitised. As well as documenting the day-to-day activities at the court, royal Bugis and Makassarese diaries were designed with blank pages between each year, which could be used for notes on important events and copies of letters and treaties, as well as songs and poems, and drawings and designs. 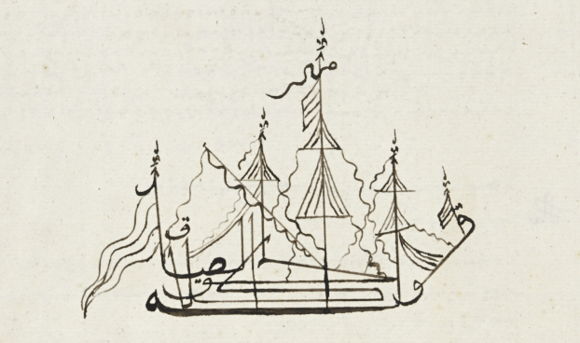 A decorative calligraphic heading (kepala surat) to be positioned at the top of a letter, in the form of a ship made out of the pious Arabic phrase, Qawluh al-haqq wa-kalamuh al-sidq, ‘His Word is The Truth and His Speech Veracity’, drawn on a blank page in Ahmad al-Salih’s diary. British Library, Add. 12354, f. 118v.

Ahmad al-Salih’s diary is one of a number of official diaries from the court of Bone acquired by John Crawfurd, who led the British expedition against Bone in 1814. During his twenty years of service in the East India Company, stationed in Penang, Java and Singapore, Crawfurd built up an important collection of Malay, Javanese and Bugis manuscripts, which he sold to the British Museum in 1842, and which are now held in the British Library. Crawfurd used his manuscripts extensively to support his research on the history and culture of the Malay world, leading to numerous publications including the three-volume History of the Indian archipelago (1820) and A grammar and dictionary of the Malay language (1852). Crawfurd could read and speak Malay and Javanese, but not Bugis.  Soon after acquiring manuscripts from the royal library of Bone, he appears to have commissioned Malay translations of some of the most important historical notes, documents and letters recorded in the Bugis diaries. Among the Malay manuscripts in the British Library which have recently been digitised are three volumes of Malay translations of Bugis documents from Crawfurd’s collection, mostly dating from around 1814.

The first manuscript, Add. 12396, contains translations in a locally-tinged Malay of Makassarese and Bugis texts, covering the early histories of the kingdoms of Gowa and Bone in the 17th century (ff. 1v-23v).  The volume also contains miscellaneous notes on Arung Palakka and the countries defeated by him (f. 23r), and a copy of the momentous treaty of Bungaya of 1667, marking the defeat of Makassar by combined Dutch and Bugis forces from Bone under Arung Palakka. Other contents include juridical regulations, and sayings and teachings of former rulers of Wajo, Tallo' and Bone. 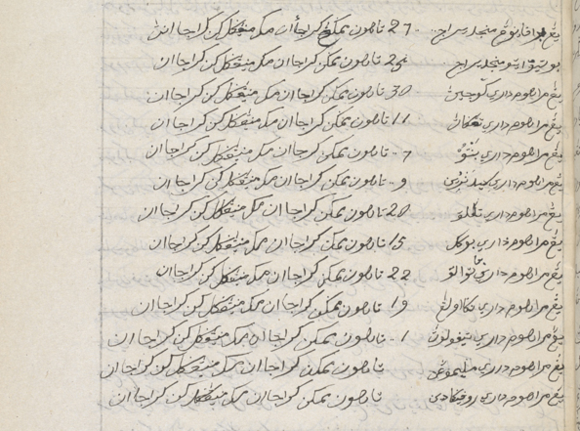 A list of the kings of Bone, some with indications of the number of years of their reigns, apparently made during the reign of Matinroe riRompegading (Ahmad al-Salih Syamsuddin), who died in 1812. British Library, Add. 12396, f. 25r (detail).

A second volume, Add. 12389, contains translations from Bugis diaries from the court of Bone between the years 1759-1775, 1804-1811, and 1805-1807, and from the notes and letters written on the blank pages left between years in the diaries. Topics covered include meetings of high court officials and representatives of other Sulawesi states; envoys of the Dutch authorities to the court of Bone (f. 40r); the ceremony of the investiture of the ruler or Arumpone (f.42v); and records of dreams (f. 56r). Notable in the diary of Sultan Ahmad al-Salih were reports from visitors and returned pilgrims about the holy cities of Mecca and Medina, and in this volume too is recorded, probably early in 1806, news of the Wahhabi takeover of the Hijaz. 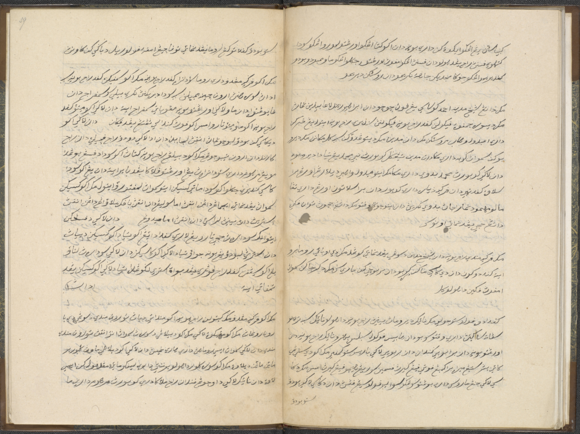 A third manuscript, Add. 12399, contains fragments of Malay hikayat, mostly religious stories on ‘Alī, Fāṭima and the mi’rāj of the Prophet, as well as translations of letters from Bugis and Makssarese, dating from 1813 to 1814. 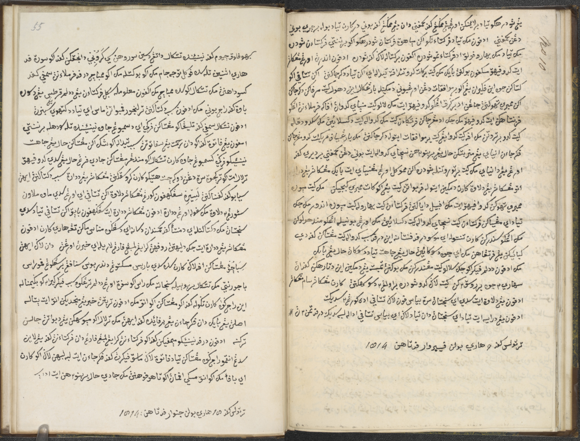 Copies of letters translated into Malay from Bugis. That on the left hand page is addressed affectionately to an elder female (Bahwa peluk cium kepada nenenda …) and is dated 18 January 1814.  British Library, Add. 12399, ff. 54v-55r.