Portrait of Major William Palmer and his family now on display

The 'Palmer Family' is now on display at the British Library. Visitors to the Library can view the painting on the 3rd floor landing, near the entrance to the Science Reading Room and opposite the entrance to the Asian & African Studies Read Room. Due to the popularity and the high number of requests to be viewed by both researchers and descendants of William Palmer, the portrait has returned to the public area. 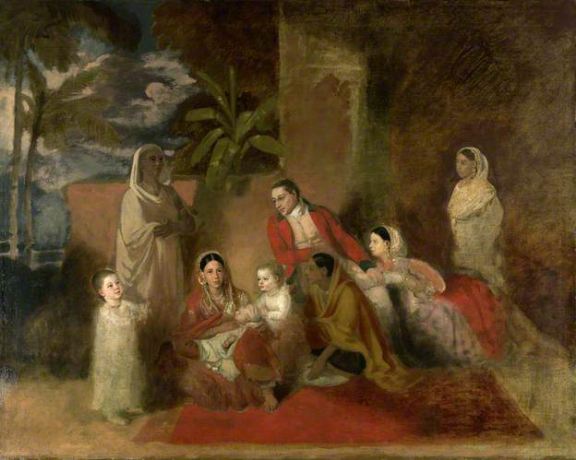 Purchased by the India Office Library in 1924, this striking group portrait features Major William Palmer, Bengal Artillery (1740-1816), with his wife, Bibi Faiz Bakhsh ‘Faiz-un-Nisa’ Begum (died 1828), on his right and her sister Nur Begum on his left. His children in order of age are William (baptised 20 March 1782), Mary (b. 1783), Hastings (baptised 27 December 1785). Three women attendants complete the group. Major Palmer wears a red military coat and yellow waistcoat and the women and children are wearing cream dresses. They are seated on a red carpet in a courtyard with palm and plantain trees.

Palmer was ADC to Warren Hastings in 1774 and Military Secretary between 1776 and 1785. He was at the Lucknow court at various times between 1782 and 1785 as Hastings’ confidential agent for the extraction of loans from the Nawab and to report on the Residents Middleton and Bristow and their staff, and acting Resident after their departure. He left Lucknow in July 1785, and was in 1786 appointed by Cornwallis to be Resident at Sindhia’s court, where he remained until 1798, and at the Peshwa’s court in Poona 1798-1801. He afterwards commanded the 4th Native Infantry until his death at Berhampore in 1816. His will describes his wife as ‘his devoted companion of more than 30 years’.

This unfinished painting had long been attributed to Johann Zoffany (1733-1810), but was in the 1970s reattributed to Francesco Renaldi. (1755-c.1799). Of Italian descent, Renaldi lived in England and studied at the Royal Academy in 1776. He went to India and reached Calcutta in August 1786, remaining there until 1789 when he visited Dacca. From 1790-95 he worked in Lucknow and returned to Calcutta, leaving India in February 1796. However, the ages of the children, especially that of the infant Hastings in Faiz Bakhsh’s arms, who cannot be more than a few months old, strongly indicate that the painting cannot be as late as August 1786, and must therefore have been painted between Zoffany’s arrival back in Lucknow in April 1785, and Palmer’s departure in July for Calcutta. This would explain the unfinished state of the canvas.

Mildred Archer discusses the reattribution in ‘India and British Portraiture’ (London, 1979), 281-86, where she also states that the lady on Palmer's left is his second or Lucknow wife, on account of what she thinks is their intimacy, but the evidence for this is decidedly dubious (she is not for example actually leaning on Palmer's leg as Archer states - it is his own hand that is visible there). The lady in question is almost certainly Bibi Faiz Bakhsh’s sister Nur Begum, who subsequently married General Benoit de Boigne, Commandant in the army of the Maratha general Sindhia, and who left India in 1797. He abandoned this lady in England and remarried in France, while she under the name of Helen Bennet remained in Horsham, where she died and is buried. The eldest child in the painting is William Palmer, founder and head of the notorious Hyderabad firm of Palmer and Co.