The British Library holds a small but significant collection of Lao material, consisting of manuscripts, rare printed books, periodicals and post cards, mainly acquired after 1973. However, the oldest items in Lao language date back to the 19th century. The earliest book about Laos is in Italian and was published in 1663. 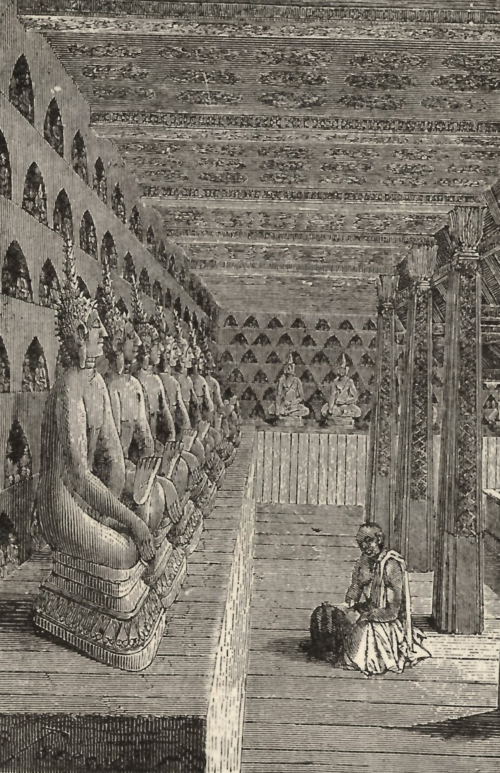 Cloister at Vat Sisaket, Vientiane. From Siam and Laos as seen by our American missionaries (Philadelphia: 1884), p. 277. British Library, 4767.bb.8

Printed material
The collection of printed material in Lao language contains over 300 monographs, most of them dating from 1950 onwards. The highlights of the collection, however, are three of the first books printed in the Lao language: John Bunyan's Pilgrim's Progress in Tham (Dhamma) script, printed in 1896 by the Chiang Mai Presbyterian Mission Press (ORB.30/5145); the Évangile selon Saint Jean en laocien (Khampasœ̄t tām lư̄ang hǣng Yōhan) in Lāo buhān script, printed in Paris in 1906 (11103.b.19); and the Évangile de notre Seigneur Jésus-Christ selon Matthieu en laotien (Nangsư̄ khlittikhun pasœ̄t khǭng phra Yēsū Khlit tām thān Matthāi) in Lāo buhān script, printed in Song Khône, Laos, in 1916 (Siam.251). The latter appears to be the first book printed in Lao language in Laos. Book printing was introduced in Laos – at the time part of the Indochinese Union – through the efforts of missionaries with the Swiss Mission Evangélique in Song Khône, southern Laos. Together with a Buddhist monk Gabriel Contesse translated parts of the New Testament into Lao, of which the first part was printed in Lāo buhān script at a printing house in Paris in 1906. The second part was printed only after Contesse’s death in 1909 at the same printer. Finally, a press started printing material in Lāo buhān typeface at the mission in Song Khône thanks to the efforts of missionaries Fritz Audétat and Fritz Widmer. 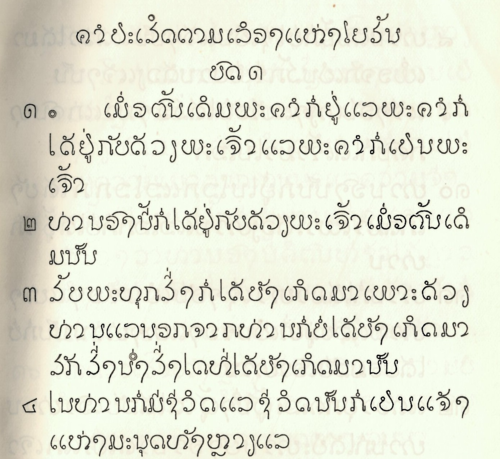 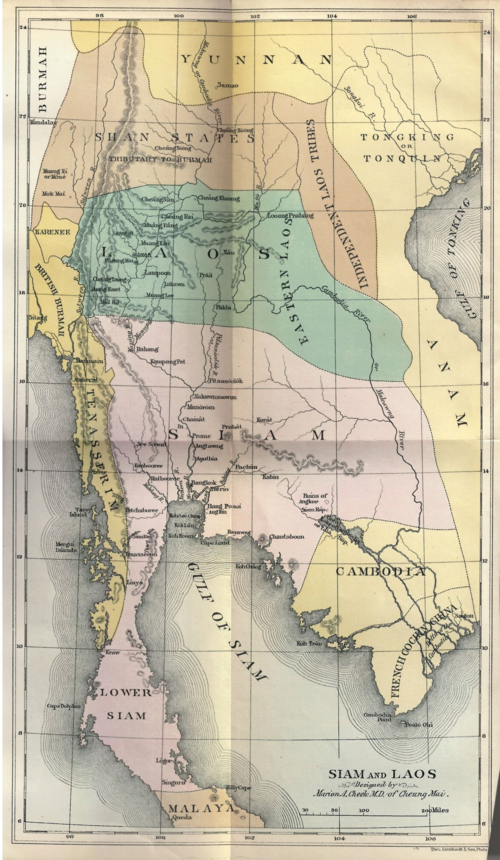 Map of mainland Southeast Asia, from Siam and Laos as seen by our American Missionaries (Philadelphia: Presbyterian Board of Publication, 1884). British Library, 4767.bb.8.

Manuscripts
In addition to printed material, the Library holds 85 manuscripts which are either in Lao language or in Pali, but written in Tham script or in Lāo buhān script. The collection comprises literary, historical and Buddhist texts, most of them written on palm leaves. A small number, however, are in form of folding books made from khoi paper or from lacquered cotton. Among the highlights are a rare Lao dictionary, which is a folding book in three volumes acquired in 1839 (Add.11624), Henri Mouhot's Alphabets and inscriptions (Or.4736), and a Kammavāca manuscript in Tham (Dhamma) script dated 1805 AD (Or.11797). 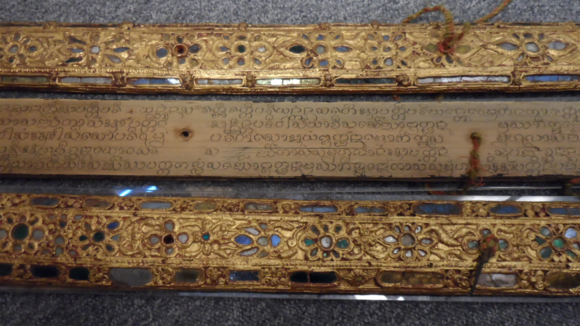 Kammavāca palm leaf manuscript from Laos. It has wooden covers which are decorated with lacquer, gilt and mirror glass inlay. British Library, Or.11797

Endangered Archives
The British Library’s Endangered Archives Programme supports the preservation and digitisation of archival and manuscript collections in their country of origin. The Archive of Buddhist Photographs from Luang Prabang has been digitised in full through this Programme and is available here. 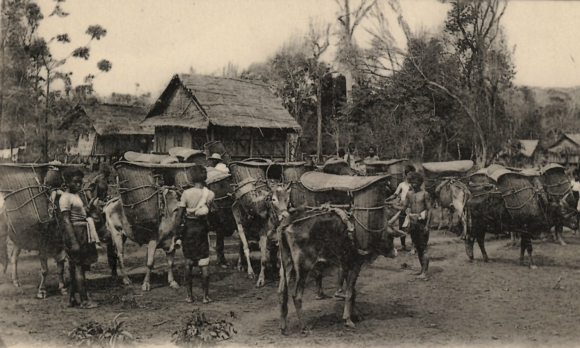 Postcard of a cattle caravan in Laos, printed around 1910. From an Album of postcards from Siam, Burma, Indochina. British Library, ORB.30/6309

Posted by Annabel Gallop at 1:03 AM