The truth about the Japanese doll festival

Looking back to the late 90s, “Girl Power” created a great sensation in the UK pop music industry. These pop idols are grown up now and no longer proudly shout their catchphrase “Girl Power”. Their time in the 90s has become a rather nostalgic topic to reminisce about. On the other hand, there is a long surviving tradition in Japan for girls to celebrate being girls. Nowadays, 3 March is a day to celebrate a girl’s well-being and happiness by setting out a special dolls display with peach blossoms. This festival is called the Hina festival (雛祭りHina matsuri). 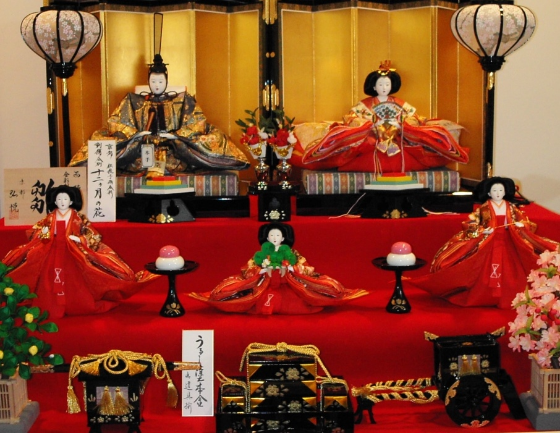 Women, both young and old, enjoy everything related to the celebration of the Hina festival, from opening boxes, unpacking the dolls and placing them in position to offering them peach blossoms. They also prepare treats such as dainty sweets and special drinks, and hold parties while taking pleasure in viewing the dolls. Basically it is a relaxing “Girly” day. 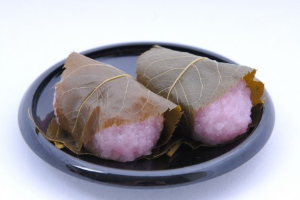 Hina (literally ʻprettyʼ or ʻlittleʼ) dolls are dressed like courtiers of the Heian period (794-1185). They are treated with great respect and are dearly loved throughout their graceful existence by all generations of women. In the display the top level is reserved for the master (男雛 Obina) and his mistress (女雛 Mebina). The next level below that is for their servants such as the Three Ladies-in-waiting (三人宮女 Sannin kannyo), the Five musicians (五人囃子Gonin bayashi), the Two ministers (随身 Zuijin), the Three guards (衛士 Eji), and beneath the mistress’s trousseau is also on display.

The custom of displaying the Hina-dolls on different levels, looking as if they were placed on a kind of stand, became popular in the Edo period (1600-1867). This display format still lives on today. A number of educational books were published throughout the Edo period, which targeted girls for the purpose of teaching women’s morals, appropriate manners and accomplishments. It wasn't however, until the later Edo period that publications dealt with the etiquette of the Hina festival on the third day of the third lunar month which we consider to be the foundation of the modern version of Hina matsuri.

An example of early Edo era educational text books for girls with a page showing the 3rd day of the third lunar month on the right.  Based on a publication by Namura Jōhaku (苗村常伯 1674-1748), edited and revised by Takai Ranzan (高井蘭山 1838-1912). ‘A record of collected treasures for woman’ (女重寶記 Onna chōhōki), 1847. Woodblock printed (British Library 16124.d.23)

In the early Edo era, instead of celebrating with Hina-dolls, ceremonial poetry competitions were held on the date of Jōshi (上巳), which falls on the third day of the third lunar month. This traces its origins back to the Heian period when one of the absolutely essential skills for courtiers was the ability to compose elegant poetry spontaneously. There were many opportunities for poets to compete against each other. Perhaps the most challenging was the highly refined event held by the bank of a meandering river. The contestants sat along the river bank and had to complete their compositions before the cup, which was floating downstream, passed them by. This was called the river bank poetry competition (曲水の宴Kyokusui no en). Some abstract  illustrations of Heian courtiers. The figures on the left page are represented as if they were sitting along the meandering river. ‘Practical design book’ (応用漫画 Ōyō manga), illustrated by Ogino Issui (荻野一水), 1903  (British Library ORB.30/6167)

Hina-dolls certainly existed in the Heian period, but not as display objects. In fact, they were children’s toys for playing with. In chapter 5 of  The Tale of Genji (源氏物語 Genji Monogatari), the hero, Prince Genji, discovers a young girl who reminds him of Lady Fujitsubo, whom he has been secretly admiring as his true love. He is eager to approach the girl, who does not have enough family members to support her upbringing, by offering his noble guardianship. However, her ill grandmother politely rejects his offer saying her granddaughter is just a child happily playing with her Hina-dolls, therefore not of suitable age to accept his overtures. 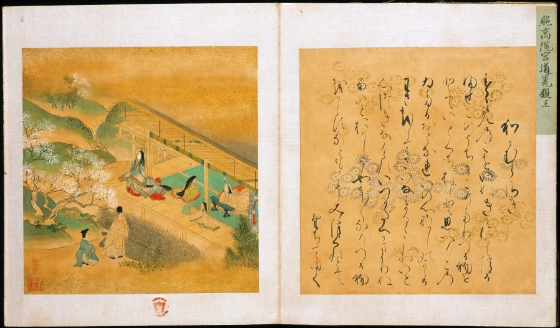 There are no episodes describing the river bank poetry competition in the Tale of the Genji, but in chapter 12, Genji undergoes  a purification ceremony on the third day of the third lunar month (上巳の祓え Jōshi no harae). The dolls had a key role during the ceremony since they absorbed the supplicants’ bad fortune. Then the supplicants threw the dolls into water in order to remove all of the negative energy from their lives. Both events were rooted in trusting in the natural power of flowing water, which was able to carry things away. 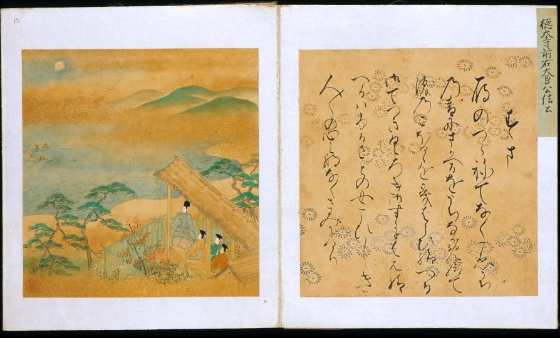 The third day of the third lunar month was also the time of peach blossom. In fact, peaches were believed to have divine power to protect people from evil. Most famously in Japanese legend, the god Izanagi, who formed the landmass of Japan with his partner, defeated demons by throwing peaches on his way back to earth from hell. Peaches might be part of the reason why the purification ceremony was carried out on Jōshi. People could expect extra protection from peach blossom as good spirits. 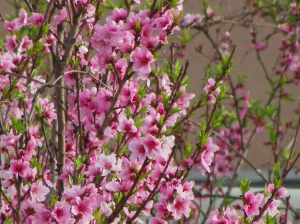 Peach blossom is still one of key elements in the modern day celebration of the Hina dolls Festival. In fact the day is also known as the Peach festival (桃の節句 Momo no sekku). It is not only pretty, but also quietly ensure a safe and successful happy “Girly” day.

With special thanks to Alessandro Bianchi, Asian and African Studies and PhD student, University of Cambridge