The Henry Ginsburg photo collection: an insight into a curator’s life and work

Henry David Ginsburg (1940-2007), the former Curator of the Thai, Lao and Cambodian collections at the British Library, started work at the British Museum Library in 1967 as a Special Assistant. He spent his entire life conducting research on Southeast Asian arts and cultures, but passed away in 2007 without finishing his last two research projects, on Thai banner paintings and the Chakrabongse Archive of royal letters held at the British Library. Henry Ginsburg left behind a huge collection of books, photographs and art treasures, which he had collected over forty years through personal and professional contacts. He was friends with several members of the Thai royal family, as well as with scholars, private collectors, and colleagues from a variety of institutions all over the world. As a curator Henry was well-known for his specialism in Thai manuscripts and manuscript painting, but his interests and expertise were far broader than this.

Henry Ginsburg was born in 1940 in New York as a son of prominent traders of Jewish-Russian descent who dealt in antique furniture, decorative art and accessories, and textiles. Having grown up in a family that admired the arts and dedicated much of their time to collecting and researching antiquities, he studied Russian and French at Columbia University and began to travel during this time. His first Asian experience was a trip to India in 1963, where he acquired a taste for cultural research. One year later he joined the American Peace Corps in Thailand to teach English in Chachoengsao, an experience which thence set the course of his future life. From this time on Henry started to live on three different continents (Europe, North America and Asia) and his part-time contract with the British Library from 1973 onward allowed him to pursue his own research and travel interests all over the world. 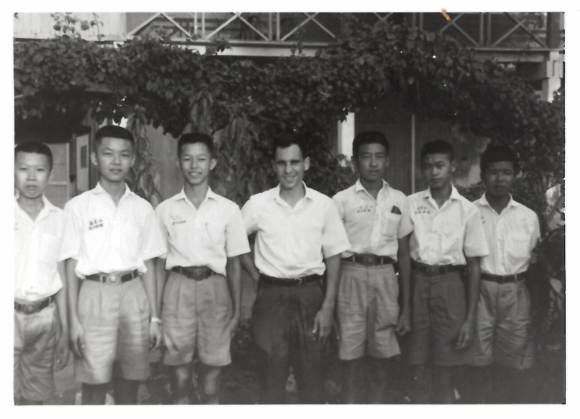 Henry Ginsburg (fourth from left) with students in Chachoengsao in the mid 1960s. British Library, Photo 1213(17)

Perhaps influenced by the Ginsburg family’s photographer Aaron Siskind, Henry left a remarkable collection of photographs, which tell the story of his professional life as well as of his own distinctive artistic and travel interests. The earliest pictures are from his visit to India in 1963, where he explored ancient Indian architecture and engaged with local communities: an aspect of Henry Ginsburg’s interests that was not widely known until his photographs were made available for research. Many of the pictures that were taken over a period of more than forty years show that he continued to pursue these interests throughout his life. 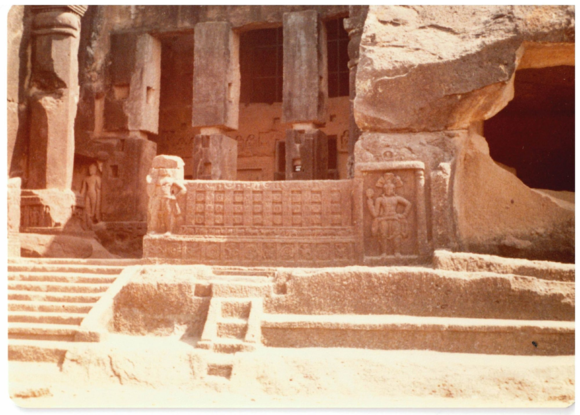 The photo collection includes a huge amount of detailed documentation of South and Southeast Asian temples in the 1970s, and particularly of ancient Khmer architecture. One particular benefit of these photographs is that they record the process of reconstruction of these sites over the past decades (for example, Payathonzu temple, shown below, nowadays has a different appearance after reconstruction was carried out). 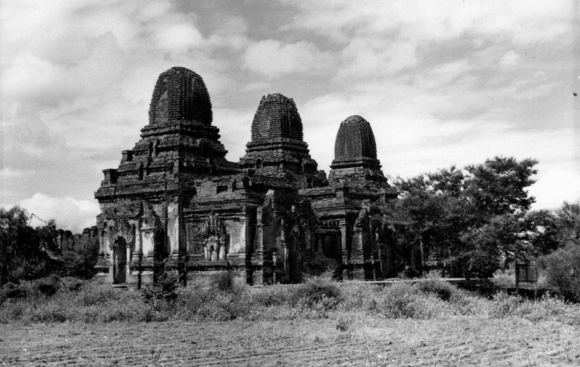 Many photographs did not contain any written information and were difficult to identify. In some cases, we made digital copies of such pictures and shared them with other scholars and researchers to find out more details. This kind of approach helped to establish the identity of a series of photographs depicting a piece of embroidery described later on in this post. However, there remain some photographs which have not been identified so far, for example the stone inscription shown below.  The inscription in this photograph has not yet been read, and the archaeological site where the photograph was taken is also not known; perhaps crowd-sourcing may provide a solution. A smaller number of rare photographs give insights into traditional ways of life in Thailand and India in the 1960s and early 1970s, one of the reasons why travelling to these countries was so popular at the time, including for Henry himself. He was fascinated by the cultural differences and travelled a lot in order to conduct his research. It would be a valid assumption to state that Henry’s research was influenced through direct contact with living traditions and the translation of religion in everyday life. This makes his work very special in comparison with established methods based, for example, purely on textual research. 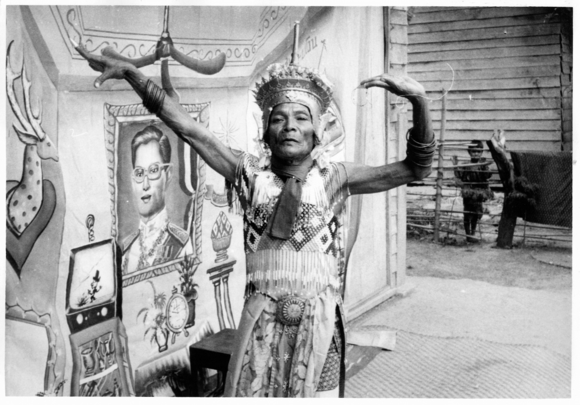 One example of this interdisciplinary approach combining anthropology, philology and art history was his research about the Norah dance, which is based on the legend of Sudhana and Manohara. In 1971 Henry wrote his Ph.D. thesis about “The Sudhana-Manohara tale in Thai” at SOAS (School of Oriental and African Studies) in London. For the analysis of texts contained in two different manuscripts, he travelled to Southern Thailand, where he also attended a Norah dance performance. The photo above was shot at this time.

The majority of pictures relate to Henry’s work as a scholar and provide a very good overview of his work at the British Library. There are various photographs of mostly illustrated manuscripts containing texts like Jatakas, Phrommachat, Phra Malai and Traiphum in all kinds of painting styles like 18th and 19th century Thai, Burmese and Khmer styles. These photos could support the comparative study of different artistic interpretations of Southeast Asian literary traditions, without spending too much time travelling, or ordering copies of manuscripts from different institutions in different countries. 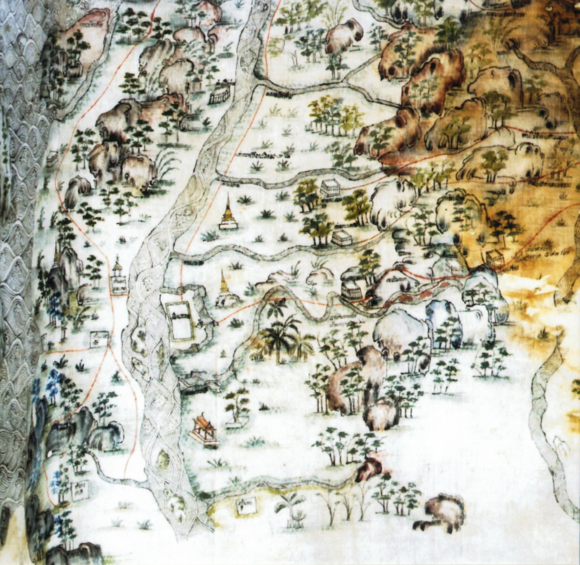 The image above and the following picture remind us of the roots of Henry Ginsburg. He grew up in a family who were prominent for their knowledge of antique textiles and decorative arts, and he followed this family tradition throughout his entire life. Therefore, he researched and collected antique textiles and other works of art in his spare time. 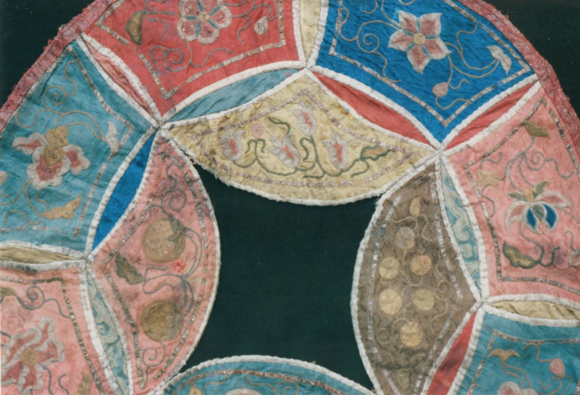 As mentioned earlier, the most spectacular piece depicted in a series of pictures from the estate of Henry Ginsburg is this piece of needle-looped patchwork embroidery shown in the picture above. It was a hard job to find out what kind of textile it was or where it originated from. After numerous emails had been exchanged with experts and former friends of Henry’s all over the world, a solution to the mystery was found. The textile artwork shown in the photograph was a Tibetan relic cover, originally perhaps from Suzhou, now held at the Asian Art Museum in San Francisco. The embroidery shows different influences from all over Asia like the needle-looping technique that can be traced back to 10th century Central Asia and the patches of fine silk from China.

The photo collection of Henry Ginsburg has been fully catalogued now and can be retrieved via the Search our Catalogue Archives and Manuscripts website. The original photographs can be viewed on appointment in the Library’s Asian & African Studies reading room. Thanks to Henry Ginsburg’s passion and work on Southeast Asian manuscripts, arts and cultures the Library holds one of the finest collections of Thai manuscripts. The British Library is grateful to have been given the responsibility to look after Henry Ginsburg’s photo collection as well.

Berger, Patricia: A stitch in time. Speculations on the origins of needle-looping. In:  Orientations, The magazine for collectors and connoisseurs of Asian art, vol. 20 no. 8 (August 1989).

Ginsburg, Henry: The Sudhana-Manohara Tale in Thai: a comparative study based on two texts from the National Library, Bangkok, Mat Wachimawat, Songkhla. Ph.D. Thesis, School of Oriental and African Studies, University of London.

Anne is a historian and anthropologist who recently graduated from the University of Freiburg. She volunteered for six weeks at the British Library in early 2015 to catalogue and research Henry Ginsburg’s photo collection. This blog article is a summary of her work.

Since the publication  of this blog post, Nicolas Revire, lecturer at Thammasat University in Bangkok, has kindly helped to identify the stone inscription depicted in Henry Ginsburg’s photograph mentioned above. It is a detail of an inscribed Dharmacakra originally from Si Thep, now held in the collection of the Newark Museum, which has been published by Robert L. Brown in his book The Dvaravati wheels of the law and the Indianization of Southeast Asia (Leiden/New York/Cologne: Brill, 1996; pp. 106-108) and, more recently, in John Guy's catalogue  Lost Kingdoms, Hindu-Buddhist sculpture of early Southeast Asia  (New York: Metropolitan Museum of Art, 2014; cat. 122). The inscription in Pali is a phrase from the Buddha’s first sermon about the Four Truths of Buddhism.

Posted by Annabel Gallop at 6:17 AM