Weird and wild monsters in the ocean’s dark depths: revelations from the Thai Mahajanaka Jataka

A typical folio from a Thai folding book containing a collection of Buddhist texts including the Mahabuddhaguna in Khom (Khmer) script. The illustrations depict Mahajanaka’s sinking ship with giant fish waiting to swallow the helpless humans. On the right is Mahajanaka clinging to a wood plank while a goddess comes to his rescue. British Library, Or.14559, f. 5.

The Mahajanaka Jataka tells the story of Prince Mahajanaka whose father was killed in battle and lost his kingdom before the prince was born. When he discovered the truth of his ancestry the prince vowed to regain his father’s kingdom. He set out on a seafaring voyage with the aim of building a fortune in a distant land so he could use the wealth to set up a powerful army. However, the ship sank in the middle of the ocean and everyone on board drowned or was killed by ferocious sea creatures - except the prince. He drifted in the ocean for seven days without food, but survived through the sheer strength of his determination and perseverance. Although he refused to implore the gods for help, a goddess named Manimekhala lifted him from the waters and flew him to the royal park of Mithila in his father’s kingdom, which he finally regained in an unusual way. Thereafter, he discovered the truths of life and left his kingdom to pursue spiritual attainment. It is the story of one who would rather perish than give up. 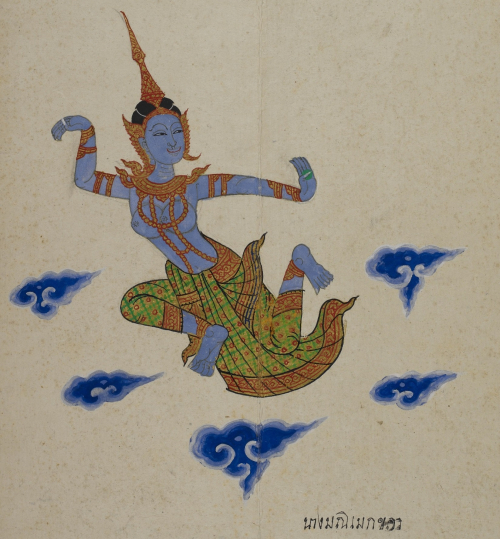 The goddess Manimekhala, believed to be the guardian of the seas in Thai Buddhist mythology, is often depicted with a body in bright blue or white colours. The illustration above is from an album of Thai character drawings from the 19th century. British Library, Or.14229, f. 13.

The illustrations in Thai manuscripts - which mostly date from the 18th and 19th centuries - capturing scenes from the Mahajanaka Jataka feature a variety of ficticious sea creatures. They show how Thai people at that time perceived the ocean, which they regarded as an integral part of the Buddhist cosmology.  The paintings reveal the ocean as an endless, constantly shifting and moving substance in cold colours, with waves that could easily swallow a large trade junk or a fleet of war ships. All sorts of creatures can hide under the water and appear on the ocean’s surface without warning. 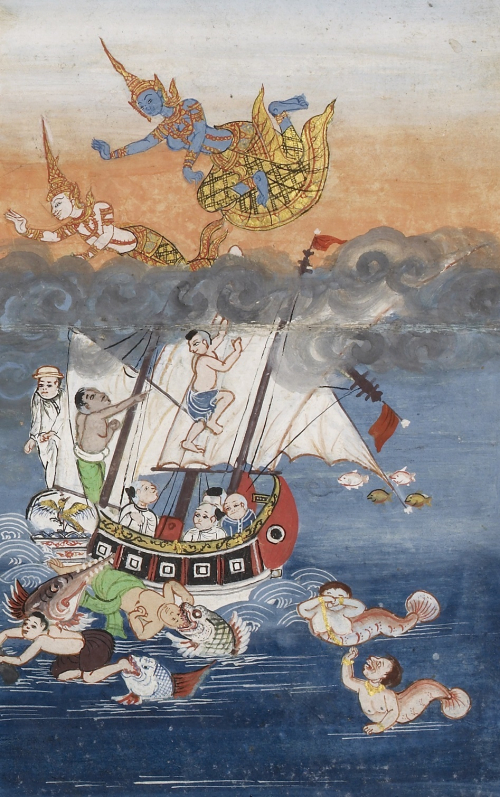 Another scene from a 19th-century Thai Buddhist manuscript depicting the moment when Manimekhala lifts Mahajanaka from the water. The other people on the ship, representing various ethnic groups, struggle to survive while a mermaid and a merman watch the event. British Library, Or.16100, f. 3.

The sea monsters that are believed to populate eight mythical oceans surrounding Mount Meru are fierce animals battling the waves, often with large teeth and bulging eyes, powerful tails or sword-like jaws. Other dangerous creatures are mermaids and mermen of beguiling beauty who try to pull humans under the water. Whereas some of the creatures do appear closer to real animals, like giant fish or swordfish, many of them are creations of the imagination of painters who had to rely on the verbal accounts of sailors or fishermen – stories which may often have been dramatised and embellished. Another source that painters would have used was the Thai Buddhist cosmology Traiphum, which includes descriptions of the eight mythical oceans. 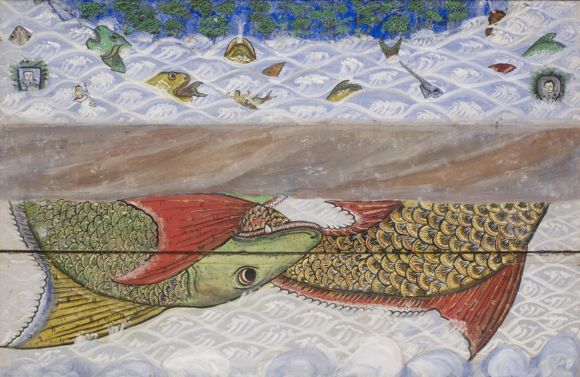 The eighth, or outer ocean that surrounds Mount Meru is shown in this illustration from a 19th-century Thai manuscript containing a collection of Buddhist texts together with the legend of Phra Malai. The world is shown to be resting on a giant fish at the bottom. Apart from the fish, one can see a mermaid (center) as well as Sang Thong, the boy born from a conch shell (Suvanna-Sankha Jataka), on the left. British Library, Or.16100, f. 96.

In contrast to Western descriptions of sea monsters, which often include water serpents or gigantic octopuses, water serpents do not usually appear in illustrations of the Mahajanaka Jataka. Whereas the creatures of the ocean are generally perceived as dangerous, death-bringing enemies of humans, serpents (naga) are regarded as potentially friendly to humans, and with a positive attitude towards the Buddha or a Buddha-to-be. The naga in the Thai tradition is not actually associated with the ocean, but is believed to reside on shore, for example in caves or in rivers. 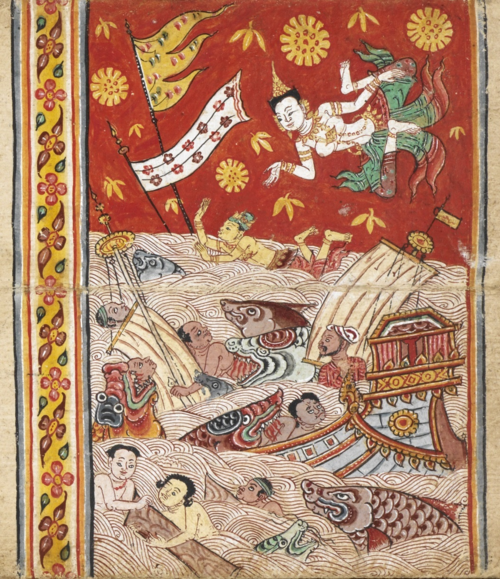 Mahajanaka’s rescue in a more abstract painting style with a bright red background and floral decorations. The outfits of the goddess and Mahajanaka are in the tradition of the late Ayutthaya  style. This Thai manuscript from the 18th century contains the Mahabuddhaguna and other extracts from the Pali canon. British Library, Or.14068, f. 3.

Manuals for artists that feature sea creatures have been produced in manuscript form at least since the early 19th century. From the mid-20th century on, numerous printed painters’ manuals were published. Nowadays these are also used by art students and tattoo artists.

Pages from an artists’ manual of characters from Thai mythology that was published in 1993. On the left one can see a mermaid and a merman, whereas on the right there are a sea cow and a sea deer.

Posted by Annabel Gallop at 5:55 AM